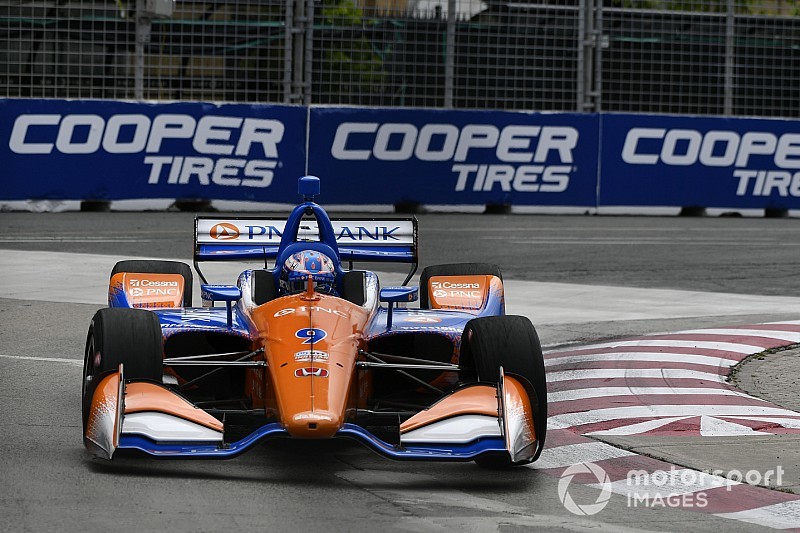 Things did not initially go smoothly for Newgarden as he was one of three drivers to bring out the red flags with a spin at the final corner.

Team Penske-Chevrolet’s Will Power had just set second fastest time of the session so far but after sliding around at extraordinary angles, the car got away from him out of the final corner and he did a 180-degree spin without hitting anything.

Teammate Newgarden was less lucky – he spun and stalled at the same place but not before tagging the wall with his right-rear and bending a toelink.

Minutes later, Takuma Sato spun his Rahal Letterman Lanigan Racing-Honda at the same point and managed to miss the wall but ended up facing into the pit exit just as Marco Andretti was coming out. Taku, like Will and Josef, stalled and needed a bumpstart.

All three were parked for five minutes for causing session stoppages.

However, Newgarden nailed P2 with his final lap of the session to split the two Ganassi cars, as Felix Rosenqvist looked back on form with a time 0.1672 slower than teammate Dixon.

Alexander Rossi was fourth for Andretti Autosport-Honda, with 2017 Toronto polesitter Simon Pagenaud slotting the other Penske into fifth ahead of the second Andretti car of Ryan Hunter-Reay. Power managed to grab seventh with his final lap, albeit half a second slower than Newgarden, while Sebastien Bourdais, another former winner here, was eighth, ahead of Sato and Spencer Pigot of Ed Carpenter Racing-Chevy.

Sage Karam, due to make his first non-oval IndyCar start in four years, was 2.9sec off the ultimate pace and around 1.8sec behind Carlin-Chevy teammate Max Chilton.