Fabio Quartararo was reinstated as the MotoGP FP2 pace-setter at the British Grand Prix over Marc Marquez, after the Frenchman was cleared of track limits abuse. 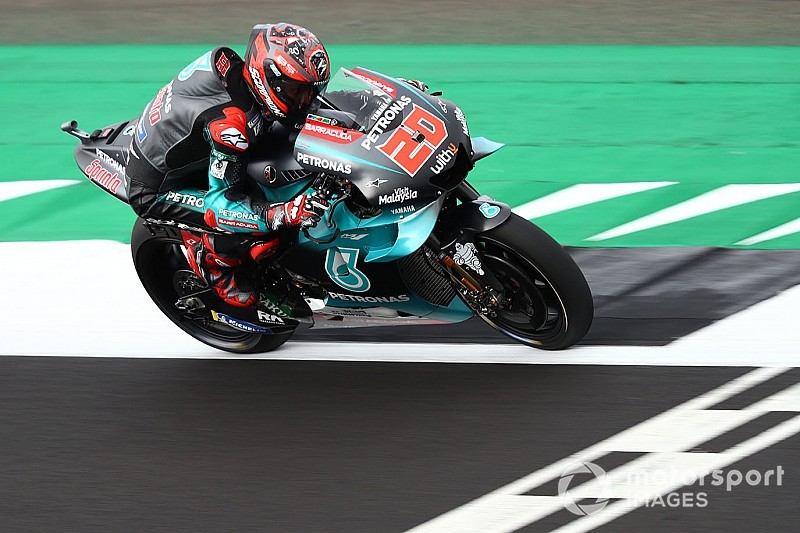 Quartararo had fired in a 1m59.225s late on with a fresh soft rear tyre, smashing the existing Silverstone MotoGP lap record by more than seven tenths.

However, he swiftly had his laptime disallowed due to a track limits infringement at Chapel, and an error at Brooklands on his final attempt meant he had been consigned to 11th in the classification.

Marquez's 1m59.476s effort stood as the FP2 benchmark at the chequered flag instead, the reigning champion having recovered from a low-side at Vale just over 10 minutes in the session.

The crash was his first since May's Le Mans round.

Following the reversal of the Quartararo decision, the Frenchman completed a clean sweep of Friday's two practice sessions, ending up a quarter of a second clear of Marquez.

Maverick Vinales was another three tenths down in third, while his works Yamaha MotoGP rider Valentino Rossi was promoted to fourth place when he, like Quartararo, had his deleted best lap reinstated after a review.

Fifth-placed Cal Crutchlow (LCR Honda) was the final rider to dip beneath the two-minute barrier, with Andrea Dovizioso just a tenth further back on the best of the Ducatis.

Franco Morbidelli was seventh aboard the last of the four Yamahas, ahead of Tech 3's Miguel Oliveira, the fastest of the KTM runners by more than two tenths.

Ducati pair Jack Miller and Danilo Petrucci made up the top 10, with Takaaki Nakagami of LCR Honda the third rider to have a fastest laptime deletion reversed, but still coming up half a tenth short of 10th place.