Zarco: Brno qualifying shows "I still have the ability"

Johann Zarco says that qualifying third for MotoGP's Czech Grand Prix made him feel like he "still has the ability" amid a largely miserable debut season for KTM. 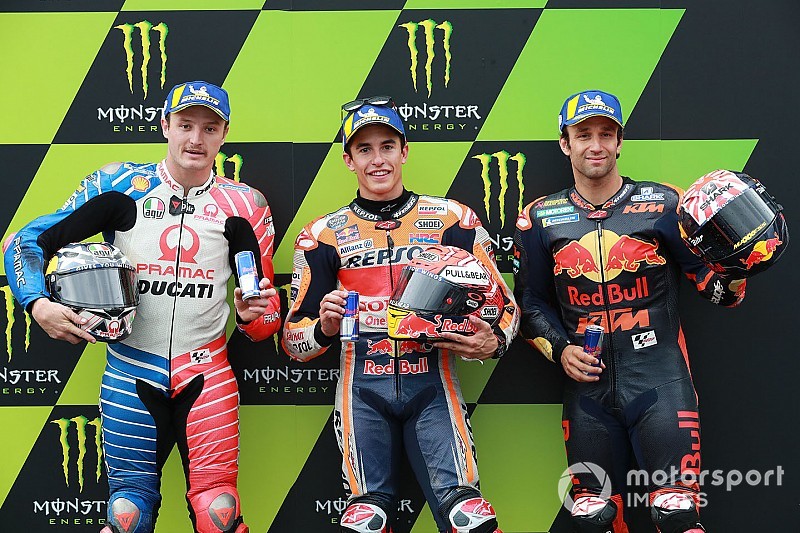 Zarco has endured a torrid first half of the 2019 campaign, but he took advantage of wet conditions in qualifying at Brno by topping Q1, and then securing third in the pole shootout on a drying track.

As Sunday's race is likely to be dry, Zarco fears he won't be able to repeat the same performance.

However his qualifying result still made him feel like he is the same man he was in the past two years at Tech 3 Yamaha.

"It motivates us for tomorrow, even if it's dry, at least to go ahead and fight as long as possible," Zarco told Canal+.

"It's an extremely difficult time and that's the kind of result that makes your heart feel better. I don't know if that means we can do it, but at least it just makes the man feel like he still has the ability."

Zarco led the way for the majority of Q2 and was only demoted by Marc Marquez and Jack Miller, who were both able to improve on slicks.

But Zarco stayed on wet tyres for his second run as well and could not improve, admitting that the track was perhaps too dry at that point.

"The lucky side on the afternoon was it was getting dry and rain tyres I can manage quite well since Moto2, so I took this opportunity," he added in the post-qualifying press conference.

"I was in the box ready to go with slicks and I felt that no, I cannot do it with the slicks. There were too many patches, so I try again with used rain tyres, but maybe it was a bit too dry.

"But anyway, it's a nice thing to start the second half of the season and it gives a lot of happiness to everyone."

Zarco added that the three-week break between the Sachsenring and Brno was well-timed for him, as his struggles started to wear him down and left him feeling his past experience was "useless".

"The summer break came at the right moment, because the last months were really complicated with the emotions going down because of the bad result," he continued.

"I was going down with the emotion. I was not finding solutions, and thinking that 10 years of experience were useless. And that was not a nice feeling.

"I realise that the experience is anyway important, and in the bad moments, just try to stay as professional as possible, and raise the head, because it’s not all your fault.

Zarco's teammate Pol Espargaro, who was also an impressive fifth, was also pleased to see the Frenchman perform strongly.

"Amazing," said the Spaniard. "Honestly, I’m happy for him because we can talk normally very clear, which with a teammate is not normal, and he’s been suffering a lot this year.

"Many people talking a lot of bad things [about Zarco]. He sometimes shows who he is, and people sometimes don’t remember what he did some years ago.

"They just need to mix [with] each other, and when he does that, he’s gonna be fast. He shows talent, and he shows the bike is on the level."