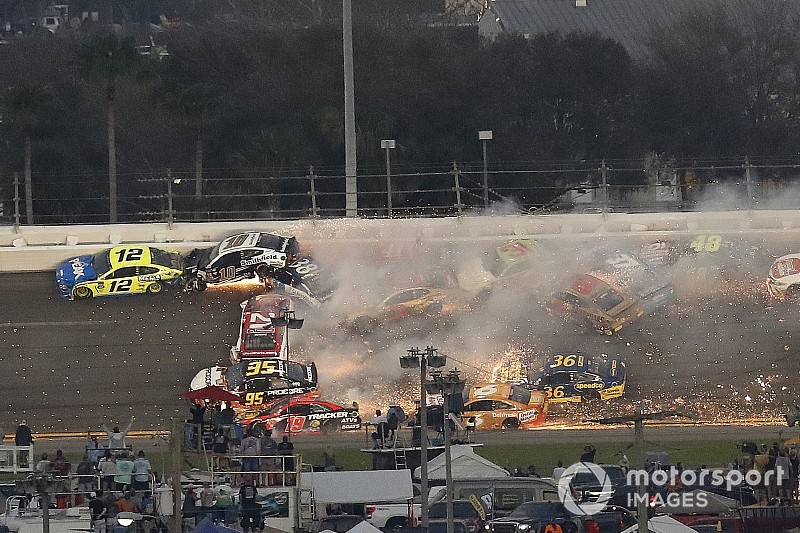 NASCAR Cup racer Aric Almirola said his Daytona 500 crash was unnervingly reminiscent of the Kansas 2017 accident that left him with back injuries.

Almirola missed two months of the 2017 season having fractured his T5 vertebra when his Richard Petty Motorsports Ford was caught up in a crash involving Danica Patrick and Joey Logano and reared up into the air before landing heavily.

Last Sunday Almirola, now in a Stewart-Haas Ford, was one of the 21 drivers involved in the massive crash triggered by Paul Menard sending Matt DiBenedetto into a spin with 10 laps to go.

As the crash unfolded, Almirola's car rode up on top of David Ragan's Front Row Ford.

"For a second I thought I was going to go right over," said Almirola. "Seeing the replay of the wreck, it has a lot of resemblance to Kansas.

"But thankfully I walked away from that one and everything's good."

None of the drivers involved in the accident were injured.

Ragan felt his escape was a particular tribute to NASCAR's safety efforts, given that his car had been underneath Almirola's.

"I saw it for a split second and before I could even do anything, I was underneath the #10 car looking at his rear housing," said Ragan. "That's just a product of these superspeedway races.

"I can't thank NASCAR and the safety teams enough. When you have a hard impact like that, you're moving around, you see sparks, you see smoke, but you're still conscious and holding up.

"From 200 mph, stopping that fast with the concrete wall's not very fun but NASCAR and their safety team do an incredible job keeping us all safe."

Almirola agreed that crashes of that type were inevitable with the pack racing that develops in NASCAR's superspeedway races.

"In the closing laps the intensity ratcheted right up and there were a lot of big runs coming and pushing and shoving," he said.

"It's kind of the product of restrictor plate racing and that kind of stuff. When you run that many cars that close together, when a wreck happens we all pile in there."