Denny Hamlin edged out Dale Earnhardt Jr. for the eNASCAR Pro Invitational Series event win Sunday at virtual Homestead-Miami Speedway in a unique event that drew eyes across the nation.

Hamlin bested Earnhardt in a last-lap duel, putting an exclamation point on what was a massively successful event for NASCAR in a time they needed it most.

With the racing season suspended until at least May 3 do the ongoing COVID-19 pandemic, the event was a much-needed distraction and an entertaining showcase of NASCAR's top stars in a completely different environment.

Drivers like Garrett Smithley and Timmy Hill had their moment to shine while some of the sport's best such as Jimmie Johnson tried their best to get acclimated to the platform. On Jeff Gluck's 'was virtual Homestead a good race' poll, over 93% said 'yes' with 27,000+ votes.

"It's always fun when you win, but regardless, I mean, it's just ‑‑ it was a great event," said Hamlin after taking the checkered flag. "For the community, the racing community, the NASCAR drivers to come together and put 20‑something drivers on the racetrack with such short notice, everyone is buying up simulation rigs this week and last week getting ready for the event, and for it all to come together and have a great finish, I think it was definitely a success."

But regardless of what viewers thought of the race, just getting NASCAR back on FS1 in these uncertain times is a success as it "energizes our industry," said the Joe Gibbs Racing driver.

"You know, I mean, I think it's a success no matter what. People are talking about it. If we got five new fans that were just sitting at home watching TV today that thought it was exciting and is willing to tune in next week or willing to tune in to a NASCAR race or go to a NASCAR race because they got introduced to racing today by iRacing, it's a success.  So, I don't think you have to ‑‑ there's no number that makes it a success.  If you made positive gains in your audience, whether it be one person or 1,000, it's a good thing."

With the motorsports world at a standstill, Hamlin explained that it wasn't hard to get drivers onto the sim and agreed to the event. It kind of evolved on its own.

"Yeah, you know, the thing is that nobody got together and said, Hey, let's all do this. I think everyone just started doing it, and then iRacing got involved and emailed everyone, said, Hey, this is what we're thinking about. NASCAR got involved, television got involved and said they'd be interested. So, I think it all just came together. But no one really talked to the drivers about unifying and participating. It was all free will, and that's what's exciting is you had 25‑plus full‑time Cup guys out there willing to spend their time doing this." 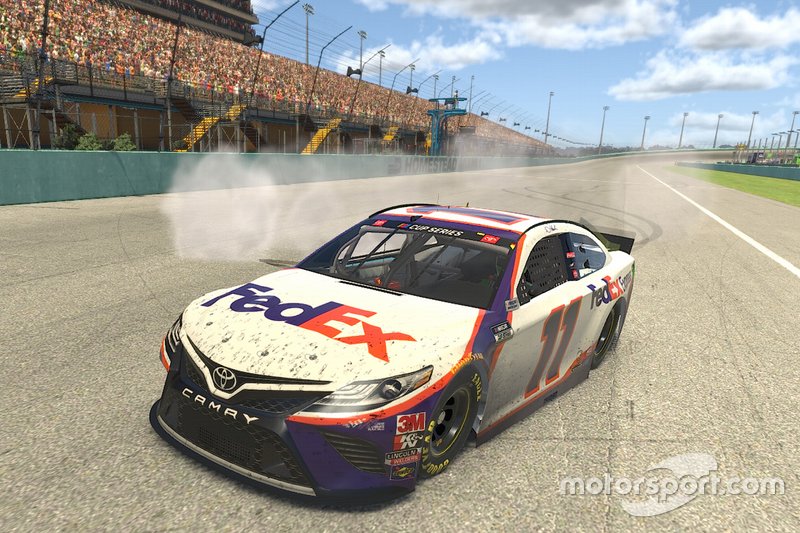 It's expected that the Pro Invitational Series will become a weekly event until the season returns with plans already being put into place for next Sunday at Texas Motor Speedway. Can we expect to se a similar lineup of drivers every week?

"I mean, I don't think anyone has any plans right now, obviously, with the state of the country right now," said Hamlin. "I think in the immediate future, it can be done. I mean, a month down the road, who knows. But certainly, I think it would be a great thing to keep it going and get people excited for the real season when it kicks back off in early May.

"You know, I don't think you're going to get everyone every week. That's going to be a challenge. But you're also going to have new guys coming in. There's certainly probably a lot of Cup guys that didn't participate that saw this and was like, I need to get back in this. Jimmie Johnson I'm sure is going to put more time in, Joey Logano, those guys. If you put the time in, you can get some of the benefits of running up front and you start to really like it."

But most importantly, the event "keeps our sport relevant if we can keep it going." Whether virtual or real world, every fan wants to see their favorite driver do well and every driver still wants to win.

"I think that it's going to ‑‑ a lot of that's going to fall on the shoulders of the drivers.  I think as long as you have drivers willing to participate, you're going to have a product that people are going to want to see.  So I think that if you got that first step, then most likely you can keep this thing going because ultimately people out there, the fans, want to see their favorite driver, and they don't care if they're racing virtually or in the real world, they want to see their favorite driver win."