Harvick honors Dale Earnhardt with his third win at Atlanta 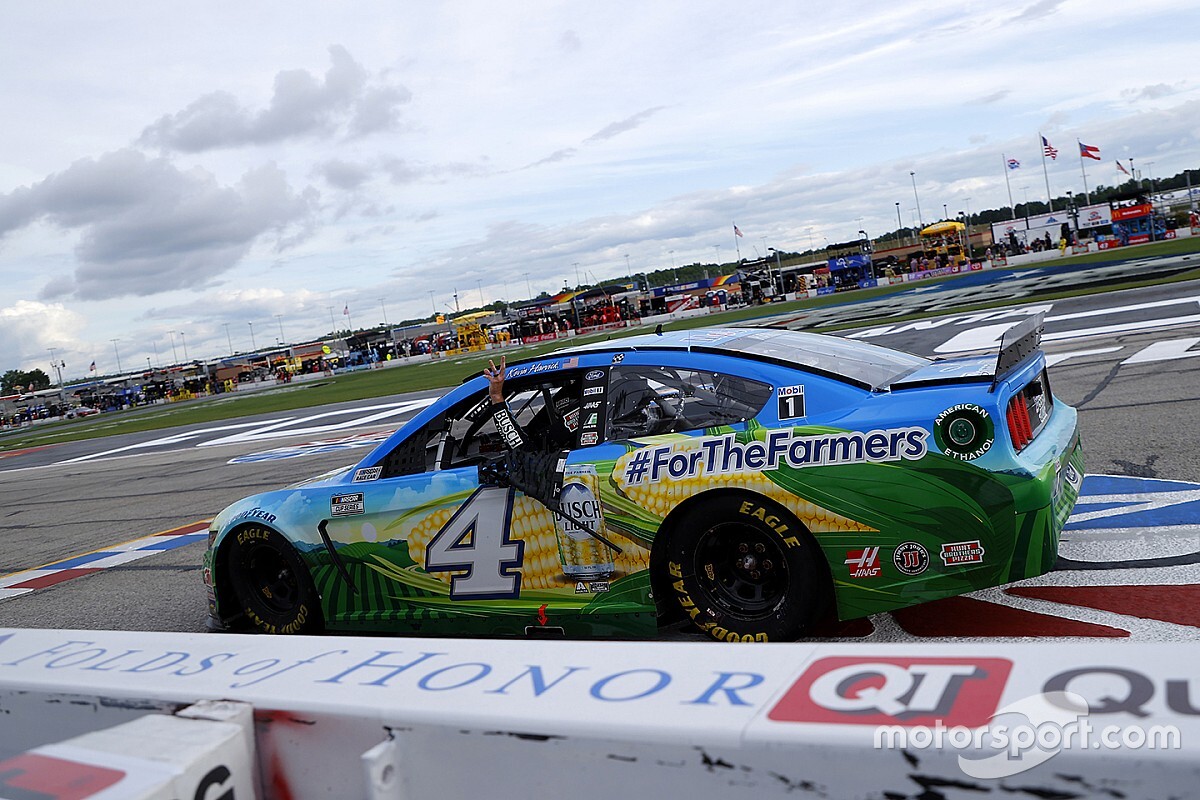 Kevin Harvick left little doubt in this one, collecting his third NASCAR Cup Series victory at Atlanta Motor Speedway, the track where he earned his first career win.

Harvick grabbed control of the race in the third stage and expanded his lead through a final round of green flag pit stops before cruising to 3.527 second win over Kyle Busch.

Following the win, Harvick made a lap in reverse around the track holding three fingers out of the window in honor of the late Dale Earnhardt. Harvick began in Cup career in 2001, taking over Earnhardt’s ride after he was killed in a last-lap wreck in the Daytona 500.

"Obviously, first win came for me here at Atlanta and this is just a race track that I’ve taken a liking to, and you always come back and have those memories and now you want to celebrate everything that Dale Earnhardt did for this sport," Harvick said. "To come here and be able to do that with wins and go to Victory Lane is pretty special, so I just have to thank everybody from Busch Light."

Asked how he got his car to his liking in the final stage Harvick said, "They had a great pit stop. We got a restart on the bottom and they got my car to take off. I was able to get track position and then once I could get through those first 10 laps and my car was freed up enough to where I could get in a rhythm and really start hitting my marks, and then by about lap 25 I could start driving away.

"I’m just proud of everybody from Busch Light and Ford, Stewart-Haas Racing. Thank you guys for everything ... Haas, everybody who helps us on this car and you the fans. We appreciate everything you guys do for us.”

Following the break between Stages 2 and 3, all lead-lap cars pit with Kyle Busch the first off pit road.

On the restart on Lap 218, Busch was followed by Truex, Harvick, Elliott and Keselowski.

Harvick powered around the outside of Kyle Busch off Turn 4 on the restart lap to reclaim the lead as Truex moved into second.

With 100 laps to go, Harvick held a small lead over Kyle Busch as Truex ran close behind in third.

After 255 laps, Harvick continued to maintain a 1-second lead over Truex while Kyle Busch remained in third, 2.5 seconds behind the leader.

On Lap 263, several drivers dropped to pit road to begin a final round of green-flag pit stops, which would give them enough fuel to make it to the end of the race.

Once the cycle of stops was completed on Lap 272, Harvick returned to the lead with a nearly 2-second lead over Truex. Kyle Busch ran third and Hamlin fourth.

With 20 laps to go in the race, Harvick’s lead stabilized at 2.6 second over Truex as Kyle Busch remained in third, 5.2 seconds behind the leader.

On Lap 313, Clint Bowyer was forced to pit under green for fresh tires after he was in danger of having one let go.

With three laps remaining, Kyle Busch got around Truex to take second place but was nearly 4 seconds behind Harvick.

Truex got around Kyle Busch on a restart with four laps to go and held on for the Stage 2 victory.

Following the break between Stages 1 and 2, everyone headed to pit road with Bowyer the first off. On the restart on Lap 113, Bowyer was followed by Truex, Kyle Busch, Hamlin and Elliott.

Truex and Bowyer traded the lead on Lap 114 before Bowyer was able to re-establish his position out front.

With 70 laps remaining in the second stage, Bowyer had a small but steady lead over Truex while Hamlin had moved into third.

On Lap 147, Bowyer dropped down to pit road and became the first car to make a green flag stop in the second stage but the decision was motivated by a right-rear tire going down.

Truex inherited the lead while the remainder of the lead-lap cars stayed on the track.

Much of the rest of the field began a round of stops on Lap 158. Once the cycle of stops was completed on Lap 164, Bowyer emerged the leader again, but could be in trouble if the stage remains green the rest of the way.

With 40 laps to go in the second stage, Bowyer held a 3.6-second lead over Truex, although Truex was narrowing the gap. Kyle Busch ran third.

Truex finally got around Bowyer on Lap 185 to retake the lead. Kyle Busch also passed Bowyer to move into second while Bowyer dropped to third.

On Lap 202, Michael McDowell spun off Turn 4 and into the frontstretch grass to bring out a caution. The lead-lap cars all pit with Kyle Busch the first off pit road.

On the restart on Lap 207, Kyle Busch was followed by Truex, Harvick, Blaney and Keselowski.

Truex got a shove from Blaney after the restart which allowed him to reclaim the lead in Turn 3.

Truex held off Kyle Busch on a six-lap dash to take the Stage 1 win, his first stage victory and playoff point of the 2020 season.

Bowyer was third, Hamlin fourth and Harvick completed the top-five.

Elliott, who started on the pole by virtue of a random draw, led the first 25 laps until NASCAR issued a competition caution to allow teams to check tire wear since they are not currently having practice.

All the lead-lap cars elected to pit with Logano the first off pit road. On the restart on Lap 31, Logano was followed by Kyle Busch, Harvick and Elliott.

After the restart, William Byron got into the wall in Turn 3 and immediately headed down pit road under green for repairs.

On Lap 37, Harvick made his way around Logano and took the lead for the first time in the race.

With 60 laps remaining in the first stage, Harvick maintained a nearly 1-second lead over Truex with Kyle Busch running third.

With 50 to go in the stage, Kurt Busch had rallied from his tough start in the race to run 14th as Harvick continued to lead the way.

Several drivers began a round of green-flag pit stops on Lap 66. Ryan Newman and Keselowski were both penalized for speeding on pit road and had to serve pass-through penalties under green.

Once the cycle of stops was completed on Lap 70, Harvick returned to the lead with a more than 4-second lead over Truex. Bowyer had moved into third.

Aric Almirola was forced to pit under green with less than 30 laps remaining in the stage for a loose wheel. He returned to the track running 29th and one lap down.

On Lap 87, Truex got around Harvick down the back straightaway to move into the lead for the first time in the race.

John Hunter Nemechek spun off Turn 4 on Lap 94 to bring out a caution. All the lead-lap pit with Truex the first off pit road. On the restart on Lap 100, Truex was followed by Harvick, Bowyer and Logano.

Kurt Busch had to start the race from the rear of the field and make a pass-through on pit road on the first lap after his No. 1 Chevrolet failed pre-race inspection three times.