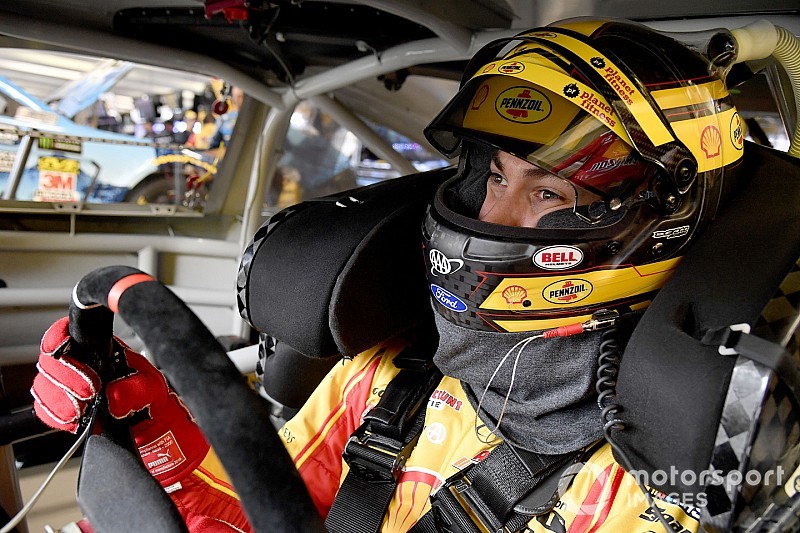 Joey Logano held off Penske teammate Brad Keselowski in a one-lap dash to the finish to claim the Stage 1 victory at Dover.

Elliott, the pole-winner, took early command of the race and moved out to a 2-second lead over the first 20 of 120 laps.

NASCAR displayed a competition caution on Lap 41 to allow teams to check tire wear after Sunday’s rains washed all the rubber off the track.

All of the lead-lap cars elected to pit, with Elliott the first off pit road. He was followed by Logano, Larson, Harvick and Keselowski. The race returned to green on Lap 46.

Matt DiBenedetto had to restart the race from the rear of the field after he had a crew member over the wall too soon during his stop.

Larson took advantage of a bobble by Logano, crossed him over and grabbed second place on Lap 47.

With 70 laps remaining in the first stage, Elliott held a 1.2-second lead over Larson with Logano running in third.

Larson had cut Elliott’s advantage to under a second with 50 to go in the stage. Logano remained third, Harvick fourth and Keselowski fifth.

With 30 laps to go in the stage, Denny Hamlin had fallen a lap down and Bowman, who started from the rear of the field, had cracked the top-10. Elliott continued to hold a small lead over Larson.

Ricky Stenhouse Jr. tagged the wall entering Turn 1 on Lap 105 to bring out a caution. He appeared to have a right-front tire go down.

“Oh, son of a gun that hurt,” Stenhouse said over his team radio. “I told you it felt like the right front was going down forever.”

All of the lead-lap cars elected to pit with Logano the first off pit road after taking just two new tires. He was followed by Byron (also two tires), Elliott, Keselowski and Larson. The race returned to green on Lap 111.

Keselowski quickly moved into second after the restart.

On Lap 116, Quin Houff hit the wall and brought out another caution. The race returned to green with one lap remaining and Logano still in command.

Martin Truex Jr., Bowman and Ryan Preece all failed twice and had to start from the rear of the field. Truex and Bowman each had their race engineer ejected from the track. Preece had his car chief ejected.

Matt Tifft's No. 36 Ford failed three times. He started the rear of the field and had to make a pass-thru penalty on pit road after taking the green-flag. He also had his race engineer ejected from the track.

Ross Chastain and Reed Sorenson also both started from the rear of the field for an engine change.