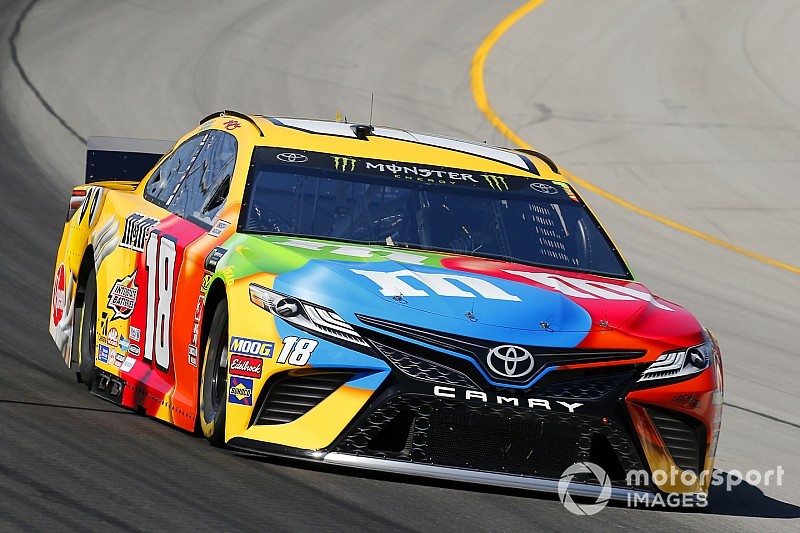 Kyle Busch, with two NASCAR Cup Series wins at Kentucky, already put himself in good position for a third.

Busch dominated much of the 80-lap stage and then fended off his Joe Gibbs Racing teammate Erik Jones after green-flag stops to claim the stage win.

Austin Dillon was third, Joey Logano was fourth and Clint Bowyer rebounded from a tough Stage 2 to finish fifth.

Following the break between Stages 1 and 2, Kyle Busch was the first off pit road thanks to a two-tire spot but several lead-lap cars elected to remain on the track.

On Lap 98, Kyle Busch had moved up to third behind Stenhouse and Bowyer.

With 60 laps remaining in the second stage, Bowyer had closed to the rear bumper of Stenhouse with hopes of challenging him for the lead.

On Lap 102, Kyle Busch dove to the inside of Bowyer to claim the runner-up position and set his sights on Stenhouse.

Two laps later, Kyle Busch passed Stenhouse and took the lead for the first time in the race.

Daniel Suarez dropped to pit road on Lap 107 and then was penalized for speeding during his stop. He had to make a drive through penalty under green.

After 115 laps, Kyle Busch had opened up a more than 3-second lead over Stenhouse while Bowyer continued to run in third.

Stenhouse gave up second-place to make a green-flag pit stop on Lap 117 – he was among the first to pit early in Stage 1.

On Lap 120, Logano also made a green-flag stop complaining of a vibration as had Newman. Chase Elliott pit on Lap 127. Several more drivers began making green-flag stops on Lap 132.

After 140 laps, Kyle Busch’s lead had grown to over 8 seconds on Hamlin, but both still had to make a pit stop before the completion of the stage.

Hamlin finally made his stop but was penalized for an uncontrolled tire and had to make a pass through penalty.

Once the cycle of stops was completed on Lap 153, Kyle Busch still held the lead but his advantage had shrunk to just over 2 seconds over Jones. Austin Dillon was in third.

Kurt Busch fends off Logano for Stage 1 win at Kentucky