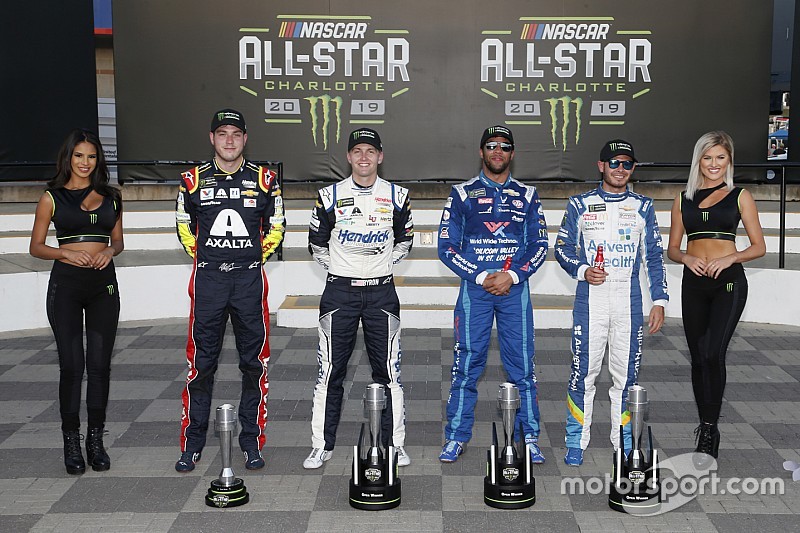 Kyle Larson, Bubba Wallace and William Byron advance from the Open to the All-Star Race.

Kyle Larson won the final stage to advance into the Monster Energy All-Star race after a thrilling race.

The driver everyone expected to advance to the All-Star race from the Monster Energy Open did but it took him until the final stage to get it done.

Kyle Larson passed Ty Dillon with five laps remaining in the final stage and held on to win the race and advance to the main event.

“I felt like our (car) drove pretty good in traffic,” said Larson. “I had to be patient and not put ourselves in a bad spot. I felt it was a cluster of a race and I screwed up on a restart (in the earlier stages).

“We just have to clean some things up to have a shot later tonight.”

Alex Bowman, who also advanced to the All Star race courtesy of getting voted in by the fans, finished third in the final stage with Matt DiBenedetto and Ricky Stenhouse Jr. rounding out the top five.

The final stage was the only one to go caution free in the race with Larson able to move on after finishing in the top three in the first two stages of the special event Saturday at Charlotte Motor Speedway.

After finishing second in Stage 1 Bubba Wallace was able to hold off a spinning Daniel Suarez to win Stage 2 and advance to the All-Star race.

Wallace who lost Stage 1 after staying out and not pitting was able to make his No. 43 Chevrolet Camaro wide enough to hold off the faster Suarez on the final lap.

“This has been tough and I’ve been feeling like a failure for a long time,” said an emotional Wallace after the stage. “I gave away that first stage, damn we needed this.”

Wallace advanced while Kyle Larson finished second while Suarez slide across the finish line in third. Ty Dillon was third with David Ragan rounding out the top five.

Alex Bowman was able to get out front and led Stage 2 up until the second on-track incident of the race brought the caution flag out two laps from the finish of the stage.

Daniel Hemric was racing Ryan Preece for third place when they made contact coming out of Turn 4 sending Hemric into the wall and eventually spinning on the front stretch.

Bowman stayed on the track along with Bubba Wallace and Matt Tifft while Suarez came down for four tires under caution along with all the others in the top 10.

William Byron edged Bubba Wallace in a side-by-side finish in NASCAR Overtime to win Stage 1 of the Monster Energy Open.

Byron pitted for four tires during the only caution of the stage on Lap 17. Daniel Hemric and Kyle Larson brought the field back to the green flag with Larson able to pull out in front and that allowed Wallace the opportunity to get by Hemric for second.

Wallace and Larson made contact while racing for the lead and that allowed Byron, who restarted seventh after his pit stop, made the move setting up the finish with Wallace.

"I thought it was (over), my eyes were pointed towards the infield and thought, man this is over,” said Byron on his contact with Wallace in the final turn. "Actually got the left sides in the grass a little bit coming to the line ... just feels amazing."

Hemric started from the pole and led 17 laps of the first stage and was able to pull away from Michael McDowell who qualified second and went on to build a two second lead before the caution was given to the field for BJ McLeod smoking in Turn 2.

Chris Buescher was also involved with damage to his car to set up the green-white-checkered finish in the opening stage.