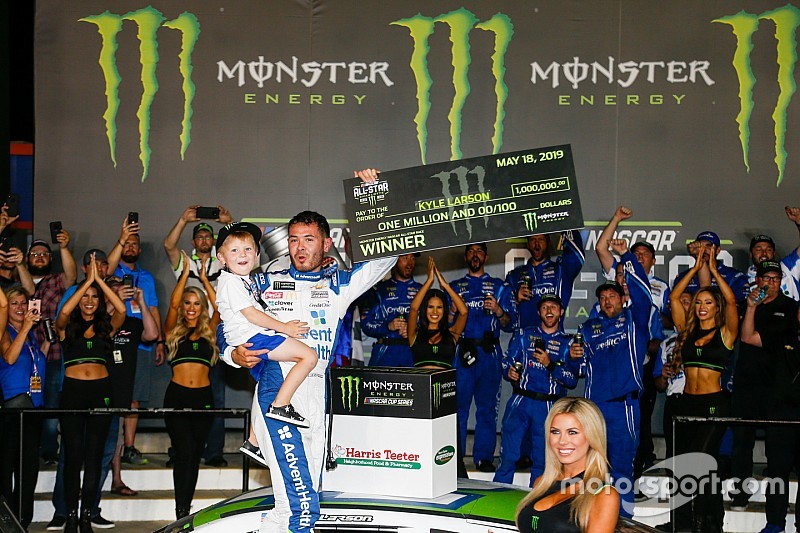 A $1 million victory for Kyle Larson in the Monster Energy NASCAR All-Star Race will make up for a lot of heartache.

Kyle Larson deftly held off a charging Kevin Harvick to win his first All-Star Race at Charlotte Motor Speedway, his first Cup Series win of any kind this season.

It’s been a tough year for Larson, who is 15th in the series standings entering next weekend’s Coca-Cola 600 and has just one top-five finish in 12 starts.

"I didn't really have any plans (to spend the $1 million)," Larson said after the race. "This is just so unbelievable this whole day. From the 'D Main' we were in (the Open) to getting a little bit of damage and getting some great restarts, those last few.

"Harvick gave me a heck of a push to get me the lead from the third row. That was huge. I have to get by (Kyle Busch) on that final restart. He surprised me with how good he was.

"Man, this is amazing. I've been close a couple times. I feel every time I've been in the All-Star Race, I've been close to winning it. It's great to finally pull it out. There's a lot of people from our shop here today and we'll get to do a lot of celebrating. I'm excited about that."

Following the finish, Clint Bowyer confronted Ryan Newman in his No. 6 Ford and threw several punches before Newman got out of his car and the two continued in a verbal tirade.

Following the break between Stages 3 and 4, Logano, Chase Elliott, Erik Jones and Kyle Busch all elected not to pit and lined up in the first two rows when the final 15-lap segment went green.

Ryan Blaney was penalized for driving through too many pit boxes and Aric Almirola had too many crew members over the wall during his stop.

Two laps into the final segment, Denny Hamlin wrecked and also collected Austin Dillon to bring out a caution.

When the race returned to green with 13 laps to go, Kyle Busch led the way followed by Elliott. On the restart, Larson went three-wide on the backstretch and got a big push from Harvick to take the lead for the first time in the race.

With 12 to go, Jones slammed the Turn 4 wall to bring out another caution. Logano, Blaney and Almirola all pit for new tires before the race returned to green with Larson in the lead.

With laps remaining, Harvick moved into the runner-up position trying to get in position to attack Larson.

With five laps to go, Harvick was catching the rear bumper of Larson’s car.

Logano led all but two of the laps and edged Elliott to win the third 20-lap stage.

Following the break between Stages 2 and 3, everyone elected to pit and Bowyer was the first off pit road thanks to a two-tire pit stop.

When the third stage went green on Lap 51, Bowyer was followed by Logano, Byron, Keselowski and Elliott. Harvick had a slow stop and lined up seventh.

Erik Jones was penalized for speeding on pit road during his stop and Blaney was forced to pit again with what he thought was a loose wheel.

With 18 laps remaining in the stage, Logano got around Bowyer to take the lead for the first time in the race.

With four laps completed, Erik Jones and Austin Dillon made contact with Jones hitting the wall to bring out a caution. Just before the caution, Harvick reported a loose wheel and also headed down pit road. Kyle Busch also pit with what appeared to be damage to the nose of his car from making contact with Dillon as well.

On the restart with 12 laps to go, Logano continued to lead followed by Bowyer, Keselowski, Elliott and Almirola.

With eight laps to go in the stage, Logano remained out front followed by his teammate Keselowski. Elliott had made his way up to third.

Elliott moved into the runner-up position with four laps remaining.

After taking the lead on a restart following a caution, Harvick easily held off Logano to win the second 20-lap stage.

Blaney was third, Byron fourth and Larson completed the top-five.

Following the break between Stages 1 and 2, only a handful of cars elected to pit and Kyle Busch led the way when the second stage went green.

On Lap 33, Newman spun on the frontstretch after contact with Wallace to bring out a caution. Larson, Bowyer and Newman elected to pit under the caution.

When the race returned to green with 16 laps left in the stage, Kyle Busch continued to lead followed by Harvick and Logano.

Harvick moved quickly into the lead on the restart as Logano moved to second and Kyle Busch dropped back to fourth.

With 11 laps remaining in the stage, Larson moved into third, Blaney to fourth and Byron into fifth. Five laps later, Blaney moved to third with Harvick still in command of the race.

Harvick moved out to a more than 1.2-second lead over Logano with five laps to go in the stage.

Kyle Busch held off a fast-approaching Harvick in a two-lap overtime restart to win the first 30-lap stage.

Bowyer was third, Logano was fourth and Dillon ended up fifth.

Bowyer started on the pole but Harvick quickly powered to the lead before the first lap was completed.

Ten laps into the first stage, Harvick maintained a very small advantage over Kyle Busch with Truex running in third.

With 11 laps remaining in the stage, Busch finally ran down Harvick, dove to the inside and completed the pass for the lead in Turns 1 and 2.

With eight laps to go, Kyle Busch held a small lead over Harvick as both Truex and Bowyer closed in trying to make it a four-way battle for the lead.

On Lap 27, NASCAR threw a caution for debris after Jones had tagged the wall and had a tire come apart as he slowed on the backstretch.

All of the cars elected to pit except Keselowski, who stayed out and inherited the lead. Kyle Busch was the first off pit road followed by Bowyer and Elliott. The late-stage caution sent the segment into overtime.

Before the race, Byron, Wallace and Larson raced their way into the main event by winning the three stages of the Monster Energy Open while Alex Bowman gained entry by winning the fan vote.