The last time Michael Waltrip started upfront for a Cup series race, Paula Abdul was atop the pop charts and "Cheers" was the hottest show on television. Several members of the NASCAR/ Nextel media core weren't old enough to vote and Brian Vickers ...

The last time Michael Waltrip started upfront for a Cup series race, Paula Abdul was atop the pop charts and "Cheers" was the hottest show on television. Several members of the NASCAR/ Nextel media core weren't old enough to vote and Brian Vickers was worried more about coloring between the lines not stock car racing. 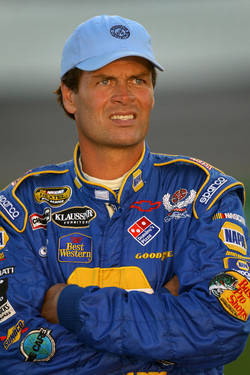 Michael Waltrip.
Photo by Bob Harmeyer.
"I'm a little amazed," Waltrip said of his pole at the Michigan International Speedway. "I didn't see this one coming. We haven't really qualified well this year. Our best starting spot this year was last week in Dover, in 18th. And we only got that one because it rained."

Waltrip's lap of 169.052 mph bested the field by almost one mile-per-hour. It is Waltrip first pole since Michigan in June of 1991 and third of his career.

"The cool thing about our car is that it is one of the best cars in race trim," said Waltrip. "I feel really confident about the race. The pole is just a bonus."

"It is definitely going to be an interesting race on Sunday," said Busch.

The highest qualifying driver from the Hendrick stable was Vickers in third with a lap of 168.34 mph. It is Vickers' best qualifying effort since he scored second at California.

"That was great," said McMurray. "We weren't that good yesterday, so we changed a lot of stuff and made a lot of improvements. The thing about the impound races is the guy who qualifies well usually races well. I'm pretty happy."

Several had issues during qualifying at Pocono International Raceway.

Jeff Gordon smacked the No. 24 Dupont Chevrolet into the wall on his lap. Gordon has had a run of bad luck in recent weeks, grabbing three DNF's, and falling to 11th in points.

He will take the green flag from the 31rst spot.

Hermie Sadler, who was released from the No. 66 Ford earlier this week, did not fare much better piloting his own ride. Sadler driving the No. 92 Ford spun during his time-trial effort and did not complete his lap.

Sadler and Jones join Carl Long and Kirk Shelmerdine amongst the drivers who did not make the field for the Pocono 500.

Tire-gate is the real headline at Pocono

Clint Bowyer: “We can’t run lap-after-lap with no cautions"

Clint Bowyer: “We can’t run lap-after-lap with no cautions"

Keselowski on Richmond winning car: ‘I want this one for Phoenix’

Austin Dillon after top-five finish at Richmond: ‘I hope they keep doubting us’