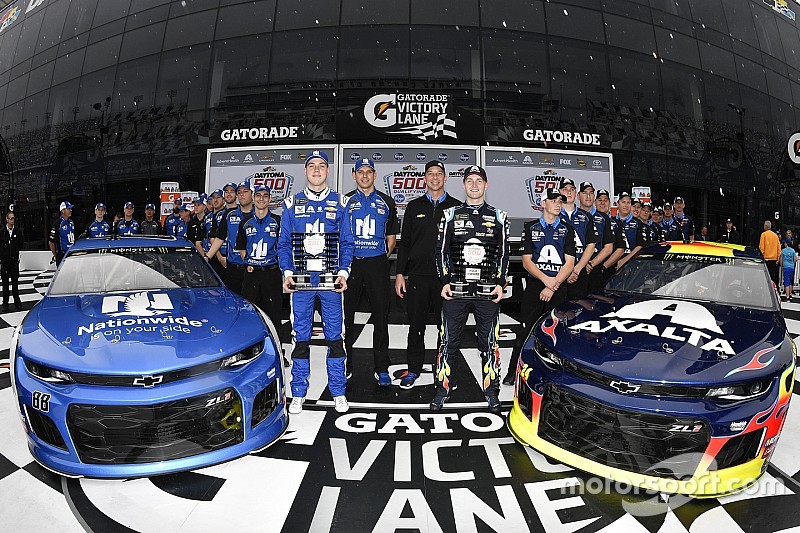 Byron held off a late challenge from Hendrick Motorsports teammate Alex Bowman to claim the pole for next Sunday’s Daytona 500 at Daytona International Speedway.

Jimmie Johnson was third-fastest, Chase Elliott was fourth and rookie Daniel Hemric completed the top-five. Only the top two drivers are locked into their starting position for the 500.

“We felt we were prepared and ready and this was sort of the first step of our process together,” Byron said of working with Knaus. “Hopefully, it goes well next Sunday. We can kind of hang out during the Duel races, learn a little bit.

Byron, 21, said he was a little worried he left some speed on the track, particularly as he watched Bowman – last year’s Daytona 500 pole winner – make his final run.

“We just lacked a little bit getting up to speed, a little too much wheel-spin,” Byron said. “This thing is fast. Obviously, a lot of credit goes to the guys. I’m really looking forward to next Sunday.

“This is pretty special and definitely a huge blessing.”

Byron’s pole is HMS’ fifth consecutive pole in the season’s biggest race and he is the organization’s eighth different driver to do so.

Also advancing to the final round were Keselowski, Truex, Bowyer, Hemric, Austin Dillon, Hamlin and Menard.

As two fastest cars without a charter in the first round, Tyler Reddick and Casey Mears have locked themselves into the Daytona 500 field based on speed.

“I’m really excited about what we’ve got,” said Reddick, the 2018 Xfinity Series champion. “It’s pretty crazy. A lot has happened in a year. I’m excited to get rolling.

“It feels awesome to be locked in. The (car) did everything it needed to for us to lock in. Can’t wait for the duels Thursday.”

Four drivers – Ryan Truex, Brendan Gaughan, Parker Kligerman and Joey Gase – will all have to race their way into the field but there are only two spots available for those four drivers.

During pre-qualifying inspection, the cars of Elliott, Austin Dillon and Ty Dillon all failed two times. The car chief of each team has been ejected for the remainder of Speedweeks and each team has lost 15 minutes from final practice prior to the 500.