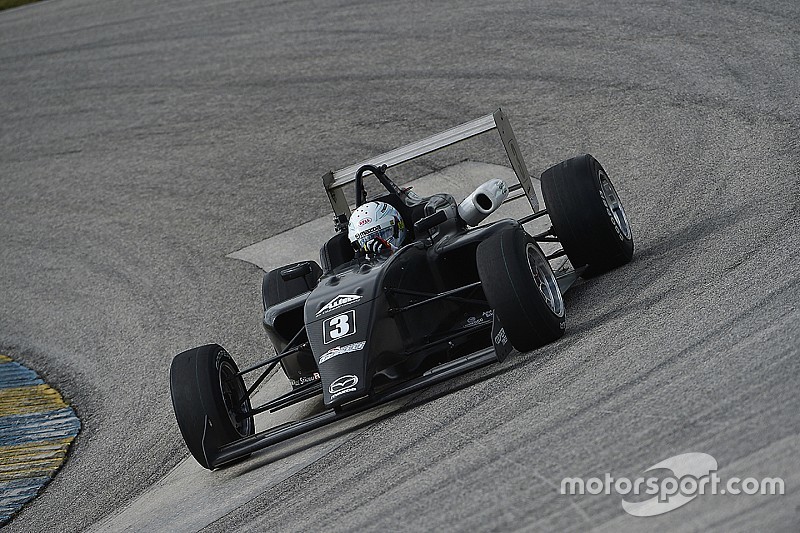 Askew not only maintained his position at the top of the USF2000 leaderboard, he pulled a remarkable 0.4sec clear of his nearest opponent on the second and final day of this series’ segment of Mazda Road To Indy Spring Training.

With a best time of 1min23.9142sec, Askew put Cape Motorsports’ #3 Tatuus USF-17 Mazda on top with a lap turned in the first of three sessions today. Around the 2.21-mile Homestead Miami Speedway road course, that equated to 94.811mph for the Team USA Scholarship winner and also victor in the inaugural Mazda Road to Indy USF2000 $200K Scholarship Shootout.

“The team is really good at making the right changes for us to learn,” said Askew, “which is what we’ve been doing these two days. We haven’t gone out with the same car as the previous session.

“We picked right up where we left off yesterday and, at the end of the day, we were the only car in the top six that didn’t put new tires on. We’re all getting more knowledgeable about the new car with every change that we make. The Tatuus USF-17 is fantastic. The series has done a great job putting it together and making it user-friendly.

“I didn’t expect the test to go this well so I’m extremely happy and very confident that we’ll be winning races this year.”

Reigning USF2000 champion Anthony Martin and Cape Motorsports with Wayne Taylor Racing hinted that they might give Team Pelfrey a tough time in the Pro Mazda championship battle this year.

The Australian narrowly edge the series’ dominant team with his fastest run of the morning, as Carlos Cunha became Pelfrey’s fastest driver, and Nikita Lastochkin also edged ahead of TJ Fischer, yesterday’s pacesetter.

Martin stated: “The last couple of days have been a big learning curve. The first day didn’t go as planned for us but, like we always do, we bounced back and this second day has been very productive. We’ve learned a lot about car setup and with my driving and, most importantly, we were quite fast.

“The biggest thing we worked on was driving, just getting me used to the car. I think the transition has gone well. This car has more power and more grip than the USF2000 car but it’s fun to learn.”

Ex Brazil F3 race winner Cunha said: “It was a very good test for me. Last week was my first time in this car and it’s very different to drive than the Formula 3 car. It has more power and I am still getting used to the tires and the difference in downforce. This year will be very challenging but I have two good teammates. I need to learn a lot – about the car and about the tracks. I’ve never driven on a street course before!”