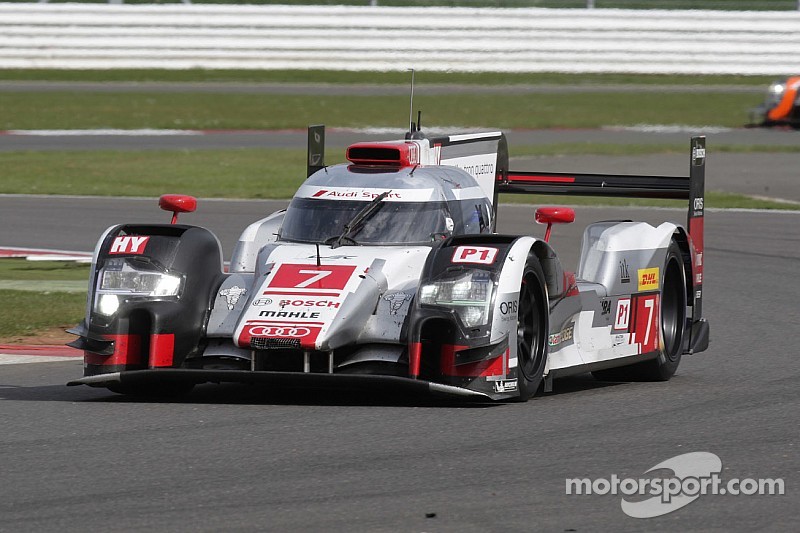 Tréluyer, Lotterer and Fässler’s tremendous spells behind the wheel hoisted the #7 Audi crew to the top step of the podium.

Benoît Tréluyer and his Audi Sport crew-mates Marcel Fässler and André Lotterer drew first blood in what promises to be an intense FIA World Endurance Championship battle after the reigning Le Mans winners came out on top at last weekend’s season-opening 6 Hours of Silverstone (April 10-12).

It’s Sunday afternoon at the home of British Motorsport and there are 20 minutes of the race remaining. Having prevailed in a mighty scrap with fellow Swiss driver Neel Jani in the Porsche, Fässler enjoys a solid, but not comfortable, lead. Inside the Audi Sport garage the atmosphere is relaxed; all eyes are following the race on the multiple screens and Tréluyer and Lotterer are trading jokes as they watch their team-mate’s progress.

All of a sudden, the entire place freezes, tension escalates and faces turn serious. Race Control has just handed the #7 Audi R18 e-tron quattro a stop-go penalty for overtaking and abusing track limits. At first, Benoît and André were dumbfounded. Now, they’re just getting angry!

No doubt we’ve got a season-long fight for the championship on our hands. Silverstone is just the beginning!

“Nobody was respecting track limits during my two stints and I radioed the team each time so that they could inform the stewards,” says a frustrated Tréluyer. “Although going wide doesn’t really help you overtake, it does enable you to defend your position. When I was done with my double stint, and handed over to André, I briefly mentioned it to him and discussed the matter with Marcel as well. Since no one was getting penalised, why should we be the only ones not taking advantage of the situation? But instead we ended up being punished for doing the same as everyone else!

“Anything can happen when you rejoin the fray with only eight seconds in hand,” explains Benoît. “If he’s held up by a GT car through a series of corners, we could lose a handful of seconds there. And if the Porsche gets too close it can use its extra power to pass us on the straight.”

Just when the pressure is at its maximum in the garage, Fassler keeps his cool in the #7 Audi and takes the chequered flag to the delight of the Audi Sport pit wall. “Marcel is just your typical Swiss guy, always staying so composed,” jokes an admiring Tréluyer.

Looking back at the nail-biting event, the 2012 WEC champions really had to dig deep in order to secure their first win of 2015.

“As far as epic races go it’s hard to top our 2011 Le Mans win, but I think we came pretty close at Silverstone,” said Benoît, reflecting on the race and his unlucky getaway. “We were a bit disappointed with fifth place on the grid after topping the timesheets during free practice. And at the start, the right gear did not engage so I was swamped by the pack. I quickly recovered and took extra care overtaking the GTs – there’s no point rushing or doing anything foolish just to gain a couple of seconds.”

By the end of lap 2, Benoît had already fought his way back to sixth place and was in hot pursuit of the second Toyota. That was when the serious business started.

“All season openers are a bit of a leap in the dark. We didn’t really know how we stacked up against our rivals in terms of performance so I took a couple of laps to observe and understand, then seized any opportunity that arose. I had a lot of fun! It’s been a while since I had last driven that kind of race. Towards the end of my second stint I was right behind the leading Porsche, overtaking it at Turn 12 and leading into Turn 13 before it got me back on the following straight, just before I pitted. So I only led for one corner but it was still an achievement!”

Everyone knows what happened next: Lotterer and Fässler’s tremendous spells behind the wheel hoisted the #7 Audi crew to the top step of the podium.

“We’re all really happy because the three of us did a great job,” Benoît enthused. “This result comes as a well-deserved reward for all the effort the team have put in over the winter. We knew a win was within reach, and Silverstone just validated that the decisions we made were right. However, the Porsche was very strong – I personally didn’t think they’d be that competitive so long into their stints, which goes to show that we can’t afford to relax. No doubt we’ve got a season-long fight for the championship on our hands. Silverstone is just the beginning!”

Tréluyer and his Audi Sport crew-mates travel to Belgium for round two of this year’s campaign – the 6 Hours of Spa-Francorchamps – which takes place at the grand prix venue on April 30 – May 2.

Can WEC ever reach F1's level of popularity?