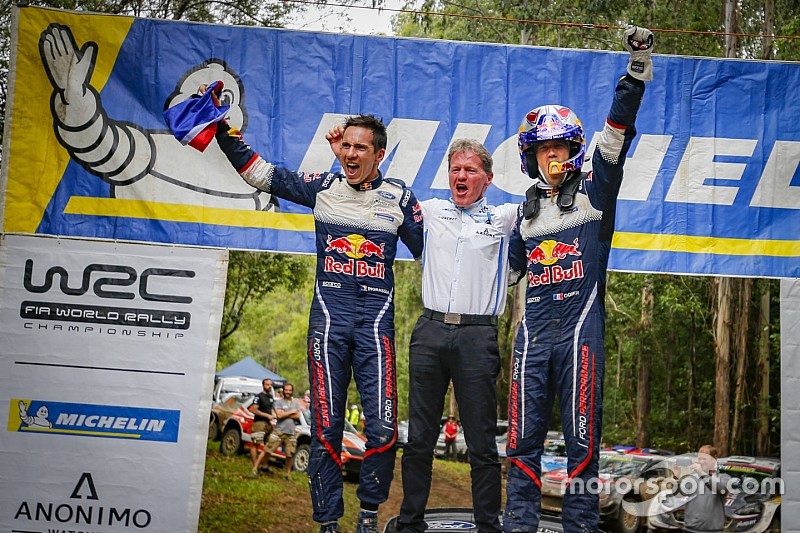 Sebastien Ogier says Ott Tanak's crash on the penultimate Rally Australia stage "killed the emotion" of becoming a six-time World Rally Champion, given that he got the news via message on a road section.

Ogier and co-driver Julien Ingrassia sealed a sixth WRC title with a stage to spare in Coffs Harbour, thanks to title rivals Thierry Neuville and Tanak both crashing out on consecutive stages early in the final loop.

Neuville was first to drop out of contention after hitting a stump on the Coramba test, before Tanak clipped a tree on the Sapphire stage and damaged his Yaris' transmission.

It was at that moment that Ogier was guaranteed a sixth crown, regardless of whether he saw the finish.

While the crashes made it a dramatic end to the season from the outside, Ogier reckons it was anticlimactic from inside his M-Sport Ford.

The Frenchman says he and Ingrassia found out about Tanak's crash during a road section, which sucked the emotion out of the moment.

"The problem is the way it happened today, it was a bit strange," he said when asked why his celebration was a little subdued compared to 2017.

"Ott stopped, we had a message on the road section and we were... okay, now it's done.

"It somewhat killed the emotion of the moment. But give me a bit of time, and I can tell you I'll enjoy it even more."

Ogier added that he can't pick a favourite from his six consecutive WRC titles, and that it's a different satisfaction to the four he collected at the wheel of the all-conquering Volkswagen between 2013 and 2016.

"They all taste good to me," he said. "I value all of them, because we had the best package with Volkswagen, but I believe we also invested a lot of energy and time to make that happen and to create all that together, and I was proud that we developed this [competition-]killing machine.

"This [with M-Sport] was a different way, and of course that's nice because. As a driver, that proves we can adapt and we can succeed in different conditions. That makes me happy.

"Six in a row, it's something really special. It's hard to put words on it."