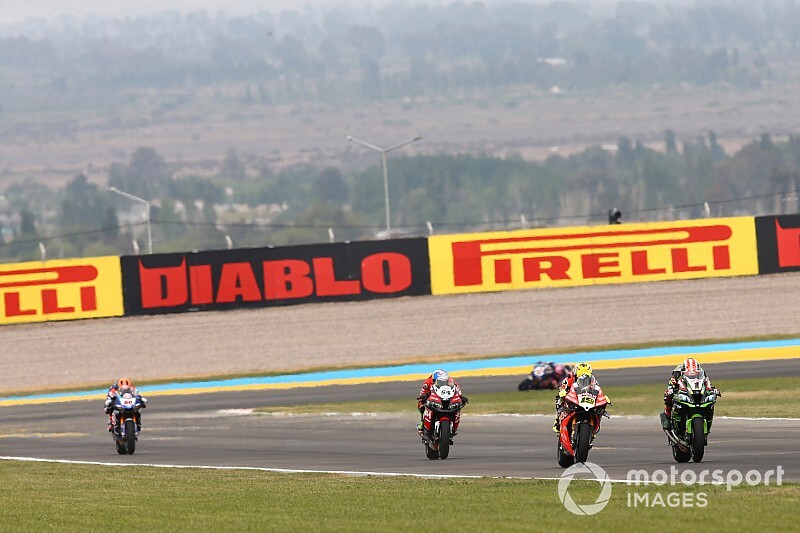 World Superbike’s governing body the FIM says conditions ahead of Argentina race one did not warrant its cancellation in a statement on the partial boycotting of Saturday’s contest.

Six riders decided to sit out the first feature race of the weekend due to unsafe track conditions at El Villicum due to a oil seepage from a recent resurfacing and thick dust blanketing the circuit.

Initially, “90%” of riders were in favour of not racing on Saturday, though 12 would eventually start after alleged pressure put on them by team managers after race organisers went above the riders.

On Saturday, Chaz Davies and Eugene Laverty – two of the six who sat out the race – blasted the FIM for homologating a circuit which did not meet its standards.

The FIM has now issued its version of events in a statement.

“Following the decision of six riders not to participate in Race 1 at the Motul Argentinean Round of the FIM Superbike World Championship, in San Juan on Saturday October 12th, FIM wishes to provide some clarifications," it said.

“At the request of the FIM in 2018, the circuit of San Juan was resurfaced to host WorldSBK in 2019.

"On Wednesday, October 9th during the inspection of the track, the FIM safety officer requested the circuit management to wash the track to remove the dust that had accumulated during the last days to ensure the safety conditions necessary for the smooth running of the Argentinean round.

"After an intensive cleaning of the track, the homologation was issued on Thursday during a new inspection.

“This homologation procedure valid from Friday to Sunday is identical for each event of the championship and takes place on the Thursday preceding each race according to the FIM rules.

“On Friday evening during the safety commission meeting, the rider representatives expressed concern over the scorching conditions and its possible effect on the newly laid asphalt.

"In agreement with all the stakeholders (Riders, representatives of FIM and Dorna), it was decided that a meeting would be held on Saturday at 12h00 after the Free Practice session 3 to make a new point on the situation.

“At this meeting all riders were happy with the improvement of the track conditions and it was unanimously decided to go ahead with the Qualifying Sessions and race. Nevertheless, after Qualifying Sessions six WorldSBK riders decided not to take part in the race two hours later.

“The FIM wishes to remind that the safety of all riders is its priority and wish to emphasize that neither the scorching conditions nor the condition of the track surface at that precise moment justified the cancellation of the race.

“In addition and to provide a high level of marshalling, the FIM also provided a seminar for the 150 track marshals on Thursday at the San Juan circuit with the support of the national federation CAMOD.”

Cooler conditions for FP3 led to more acceptable track conditions, though they worsened in qualifying due to the heat, with laptimes 1.1s slower.

The protesting riders lobbied to have two feature races run on Sunday when they knew conditions would mimic those of FP3, and the full field did contest Sunday’s two outings.