Toprak Razgatlioglu expects next year's Yamaha R1 to be “very strong” after testing some parts of the Japanese marque’s 2021 World Superbike challenger in Jerez.

Yamaha was one of the three WSBK manufacturers present at the two-day post-season test at the Spanish venue last week along with Kawasaki and Honda.

The R1 test bike featured several new parts that will go on the 2021 machine, including new brake pads, with the aim of improving its braking and turning ability in slow corners.

Razgatlioglu set the second fastest time on the final day, finishing half a second down on six-time champion Jonathan Rea who was trialling the latest iteration of the ZX-10RR.

The Turkish rider also tested the current-spec R1 for a back-to-back comparison and immediately felt the 2021 parts bringing a noticeable improvement.

“I rode again with new parts on the test bike and set a very good lap time," said Razgatlioglu. “Also I'm surprised because we saw a 1m38.8s this is the very first laptime.

“We tried the Q [qualifying] tyre but the laptime was not coming, a 39.2s maybe. After I tried again the old bike and we tried different clutches and also different parts.

“The two days [were] very positive. Also the weather was very good, hot conditions, because I need hot conditions [to test the] bike. In Aragon, the rear was sliding too much, now we are working on the rear, it’s [not] great, but not bad.

“Now I wait [for the full] 2021 bike. I think the new R1 is very strong because we tried just some parts and the bike is [already] better.

“And good turning, this is for me a good point because I need a good turning bike. And with rear grip [we made a] very small step, but the bike is not the full 2021 bike.”

Razgatlioglu kicked off his stint with the factory Yamaha team with a victory in Phillip Island, and followed that result with five podium finishes in the next seven races.

The Turkish rider’s championship challenge was derailed with a mediocre run of results in the middle part of the season, but he capped off the campaign with a double win at Estoril, beating his BMW-bound teammate Michael van der Mark to fifth in the standings.

Razgatlioglu said his motivation level is now “very high”, having admitted in the Portugal curtain-closer that he had wanted the season to end after a tiring schedule that featured seven rounds in less than three months.

“I got a good start [to the season], but you know Aragon race [the results went] down and also, I was destroyed because I think there were some problems here but always I said [it was a] bike problem,” he said. “Also we tried a new set-up but [things were] not changing.

“At the last race I said I would just ride the bike, not try set-up. Just I ride. Also I needed a podium again for motivation for winter. But I won, I was also surprised. But now the season is finished, for me it’s very good. Also motivation is very high.”

Yamaha is not introducing an all-new bike for the 2021 WSBK season, but team manager Paul Denning believes small updates could make a huge difference to R1’s capabilities next season.

“Many of the evolutions Yamaha have brought to this test have been positive,” Denning said. “The R1 street bike had an update in 2020, for ‘21 is more or less the same. But for the racing bike, as you know the last round we won two races, so we are quite competitive.

“It’s always small details that make the difference. So here we’ve been looking to find more turning from the chassis in the middle of the corner, better grip to improve for Toprak who is so extreme with the braking, even more braking performance.

“Sometimes small details are quite complicated solutions, so we’ve had to test step by step. So far these two days have been quite successful, the guys are going fast and we are happy.”

Razgatlioglu will be joined at the works Crescent Racing-run Yamaha team next year by newly-crowned World Supersport champion Andrea Locatelli, who was sixth-fastest at Jerez - two places behind satellite GRT rider Garrett Gerloff. 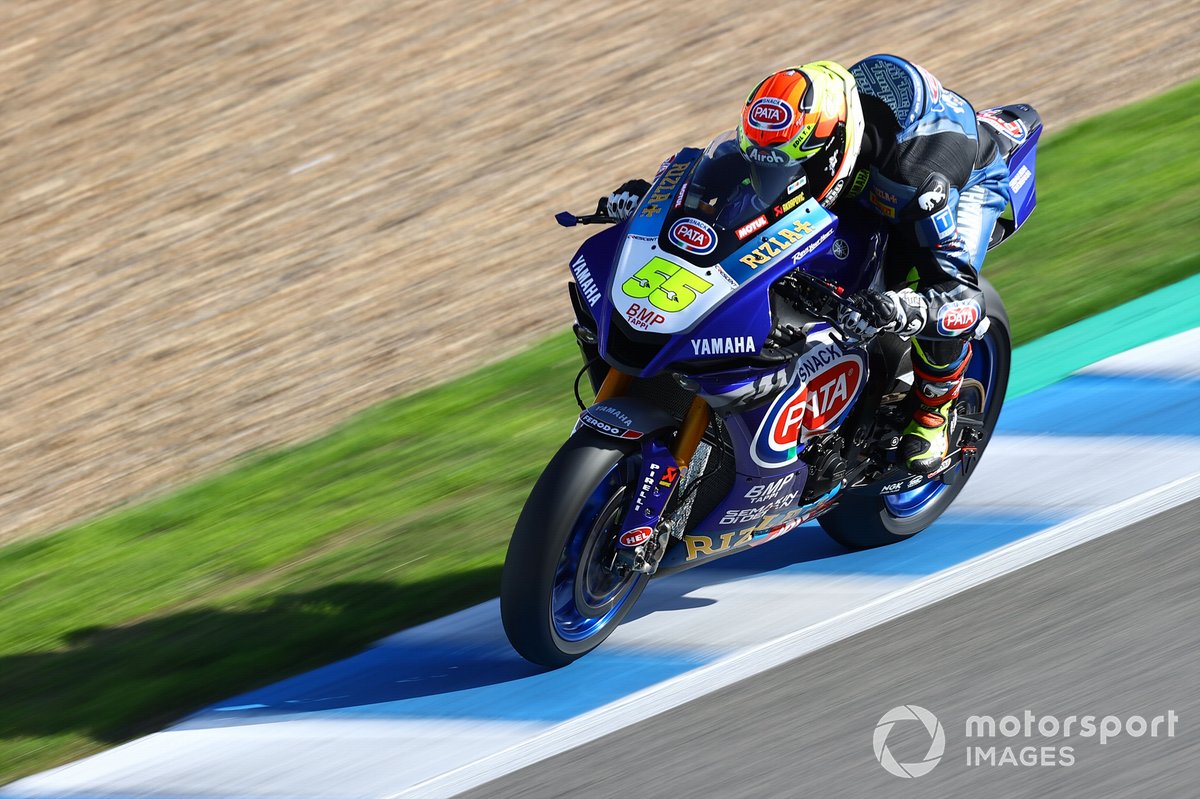 Razgatlioglu: The "real Toprak is back" after Donington treble

Honda is poised to continue with both Iker Lecuona and Xavi Vierge for a second season in the World Superbike Championship in 2023, with the team ruling out freeing up a space to accommodate MotoGP rider Takaaki Nakagami.

Scott Redding says he won't be afraid to ride aggressively against this year's World Superbike title contenders for the rest of the season after a particularly tough battle against Toprak Razgatlioglu at Most.

Michael Ruben Rinaldi had dismissed suggestions he could be in danger of losing his Ducati World Superbike ride to ex-MotoGP racer Danilo Petrucci next year.

Tom Sykes is eyeing a return to the World Superbike Championship next year and the Puccetti Kawasaki team could emerge as the most likely destination for the 2013 title winner.