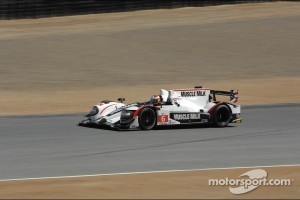 A home race for Muscle Milk Pickett Racing will see the team start on pole position. Klaus Graf was the fastest qualifier for the American Le Mans Monterey presented by Patrón on Friday with a lap of 1:13.573 (109.508 mph) in his Honda Performance Development ARX-03a prototype.

He and Lucas Luhr will try to deliver Muscle Milk its first victory at Mazda Raceway Laguna Seca in the American Le Mans Series presented by Tequila Patrón. Graf out-qualified Dyson Racing’s Guy Smith by 1.785 seconds. It was a welcomed sight for the team based out of Benecia, Calif., less than three hours to the north of Monterey.

“We have not been on pole here as a team, but the HPD cars have always done well here,” Graf said. “We've improved the car in each session. That is the goal no matter if there are two cars or 10 cars in the class. We have also worked with Michelin in testing to bring our street soft tire from Long Beach (a Muscle Milk victory) and make it work here. It says a lot about how well they make tires.”

The Muscle Milk and Dyson squads enter the race tied for the P1 championship lead; Dyson won at Sebring and Muscle Milk last month in Long Beach. For the Mazda Raceway round, the teams are taking different approaches when it comes to the driving lineup.

While Graf and Luhr go at it alone, Smith is set to team with Chris Dyson and Johnny Mowlem in the Dyson Lola-Mazda coupe.

“Greg (Pickett, team owner) gave us the chance to drive with two drivers. It gives us maximum track time to dial in the car. Certainly it’s physically demanding, but we've done it before. The pace will be close and we're going to be pushing the whole time. You don't want to get out of the rhythm, but you can beat yourself here with all the cars in different classes.

Level 5 Motorsports’ Christophe Bouchut won his second straight Mazda Raceway P2 pole position, this time in an HPD ARX-03b. The Frenchman posted a lap of 1:15.846 (106.226 mph) to qualify third overall on the grid. This week he is teaming with Scott Tucker and Franck Montagny.

“We are very competitive and reliable, so we're going to push and see where we go,” Bouchut said. “We have made some improvements over the previous car (an HPD ARX-01g) with grip and some power. It is not a big gap, but it has certainly gotten better.”

Bouchut and Tucker are 2-for-2 this year in P2 having won at Sebring and Long Beach to open the season. The class has grown this year in quantity and quality including the likes of Conquest Endurance, Black Swan Racing, Dempsey Racing and Project Libra.

The Dempsey squad qualified third in class in its ALMS P2 debut. Jonny Cocker set a lap of 1:17.494 (103.967 mph) in the Lola-Judd he drives with Hollywood star and team co-owner Patrick Dempsey and team co-principal Joe Foster.

“More competition than last year makes this more special to get the pole position,” Bouchut said. “It was interesting to fight between us (Bouchut and Montagny). We each had to make no mistakes for pole. At the end I was just faster.”

A year after winning overall in a prototype, Aston Martin Racing took the GT pole following a stunning run by Darren Turner. The Briton set a lap of 1:22.229 in his Aston Martin Vantage to beat out Corvette Racing’s Tommy Milner by 0.432 seconds.

Turner last won an ALMS pole at Lime Rock Park in 2006 – also in an Aston Martin. The British marque was a GT-class winner at Mazda Raceway in 2006.

“We're dialing it in,” Turner said. “The Vantage is good on medium-speed corners, so there are four or five good corners for us here. The slow ones we're not so good at, but the rest we're strong. The car hooked up. I kept it off the sandy bits and kept it clean.”

BMW Team RLL’s Jörg Müller qualified third with a lap of 1:22.905. As is regularly the case, the gap in GT was extremely thin. The eight quickest cars were within 0.713 seconds; the interval from third to eighth was 0.037 seconds.

This is the second race on as many continents in as many weeks for the Aston Martin squad. The team led GT early in the FIA World Endurance Championship round at Spa last weekend only to bow out because of a gearbox issue. That made Friday’s performance that much more impressive.

“The guys put (the car) on the plane and had to change things out when we got here, but we also have the hardest working team on the pit lane,” Turner said. “We're on a steep learning curve with the car. We're just preparing for Le Mans and trying to get the car to be competitive.”

Bruno Junqueira won his second Prototype Challenge pole of the season at one of his favorite tracks. The Brazilian set a lap of 1:17.867 in RSR Racing’s ORECA FLM09 that he drives with Tomy Drissi and Roberto Gonzalez.

“Junky” has a deep level of appreciation for Mazda Raceway as evidenced by two runner-up finishes in his Champ Car career.

“The RSR team is doing a good job in our first year with the car,” Junqueira said. “We had some problems yesterday but they fixed it. Today in the last 30 minutes of the practice session, the car was really good. We didn't touch much of the car for qualifying. It was just well-prepared.”

Junqueira set the fastest race lap in the most recent ALMS round at Long Beach and gave the RSR team a much-needed lift early in its rookie PC season.

“We had the speed in the first six hours of Sebring and the fastest race lap of Long Beach. I hope by starting on the pole for this six-hour race will keep the morale up for the team,” Junqueira said. “I am enjoying this so much. Last year was my first year doing sports cars, but we didn’t have the fastest and most competitive car. Now having a car that is competitive is really fun. I didn't pay attention much to the PC cars last year and now we have eight cars that are 0.9 seconds from each other.”

Damien Faulkner took the GT Challenge pole for Green Hornet Racing – his first of the year and second of his ALMS career. The Irishman set a best lap of 1:27.495 in the Porsche 911 GT3 Cup he shares this weekend with Peter LeSaffre and Sebastiaan Bleekemolen. A winner in the last round at Long Beach with LeSaffre, Faulkner was 0.175 seconds quicker than TRG’s Nick Tandy.

A pole run for Green Hornet seemed unlikely early as the Porsche experienced what Faulkner called a “fuel surge”.

“It was silly, and something just weird,” he said. “I had to abort on what would have been on the fastest lap of the run. I was upset about the problem. It put me in a different mode, and I'm glad my mom wasn't on the radio. I just had to knuckle down and do the job I’m here to do – go fast and get results.”

Jeroen Bleekemolen was only 0.003 seconds behind Tandy, putting the top three cars within 0.178 seconds.

“It was a very, very good lap. It worked out,” Faulkner said. “To get the pole for Green Hornet was fantastic. They are the hardest working team on the pit lane.”