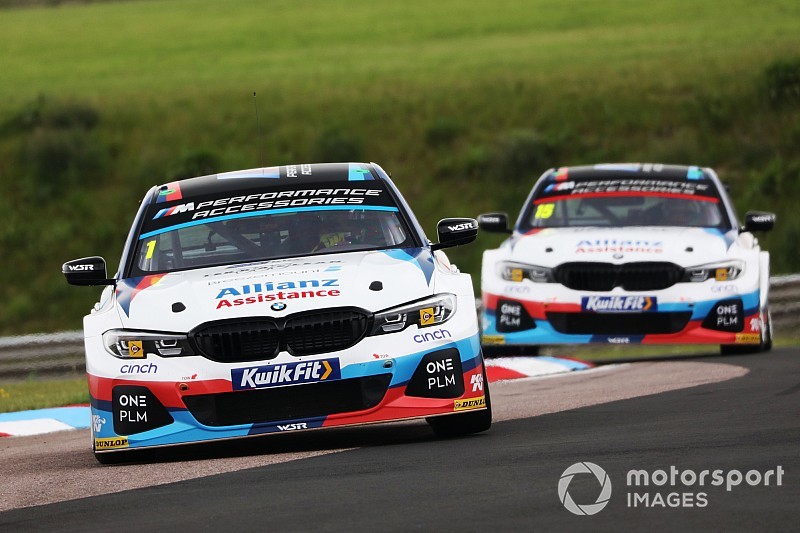 BTCC technical bosses have pegged back the WSR BMW 330i M Sport cars in the series during an in-season turbo boost review.

The BMWs, brand new for this year, have won five of the nine BTCC races so far in 2019.

Reigning champion Colin Turkington is joint top of the standings heading into the three races at Croft this weekend, while three-time race winner Andrew Jordan is ninth in the standings. Podium finisher Tom Oliphant is in the other BMW.

All the other engines on the grid remain at the same level of boost they were granted at the start of the campaign.

WSR boss Dick Bennetts said he was “disappointed” with the adjustments. The turbo boost level has been reduced by 0.02 bar.

“We have spent just under £900,000 on getting three new chassis ready, but we haven’t spent anything on the engines at all since last year,” said Bennetts.

“There were rumours that people wanted our engines turned down at the end of last year, so it could be a legacy of that, but it is just something that is going to make our lives a little bit more difficult.

“It is the way the championship works, I guess, but we have done nothing to our power output since 2018.”

BTCC chief executive Alan Gow reiterated that the alterations are done after meticulous studies of the results from the opening three meetings at Brands Hatch, Donington Park and Thruxton.

“We don’t just stick our finger in the air and come up with these things,” said Gow. “The technical guys have looked at the data, and it is all available to us.

"We have given WSR the lowest possible reduction of 0.02 bar. That equates to about 4bhp. In terms of the overall percentage of power, it is not too much.”