Fernando Alonso says he has no regrets over forgoing a cautious finish to the 2020 Dakar Rally, after a roll on Wednesday likely cost him a top-10 result.

Favourable road position for the Haradh - Shubaytah stage meant Alonso was primed to contend for a maiden stage win, having finished second to the Century buggy of Mathieu Serradori two days prior.

But his hopes were dashed just over a kilometre into the test when his Hilux was sent into a double rollover going over a dune and sustained damage that forced a subsequent stop.

Alonso wound up losing over an hour in the weather-shortened stage, and would now need to make up a similar gap to the four cars ahead of him in the general classification over the two remaining stages if he is to recover a top-10 finish,

"I'm fine," Alonso said after the crash. "As soon as we started, we had the roll - but other than that it was a good day, we're here.

"We didn't lose much, just some places, and I don't mind if I'm sixth or 13th either way.

"I'm so lucky to still be in the Dakar, to stay in this tough race. We don't give up, and we didn't come here to ride around.

"I'm trying to win stages and that's what we like to do. Today I wanted to win. You can fail, but you can't not try."

The stoppage was necessary to remove the windshield, as well as change two punctured tyres and a suspension arm.

Alonso says the car was "already at 100 percent" further into the stage.

"I know it's the news of the day, there were a thousand people waiting in every place, but look, we were lucky," Alonso repeated.

"[To be] 14th overall in my first Dakar, just a small setback where we lost a few minutes - but that's the tone of the Dakar, there are others who didn't finish. We found [Borgward driver Nani] Roma fixing the car, we are lucky to have reached the finish.

"I'm sorry if these aren't the comments you may have wanted to hear, but I'm quite happy with the day." 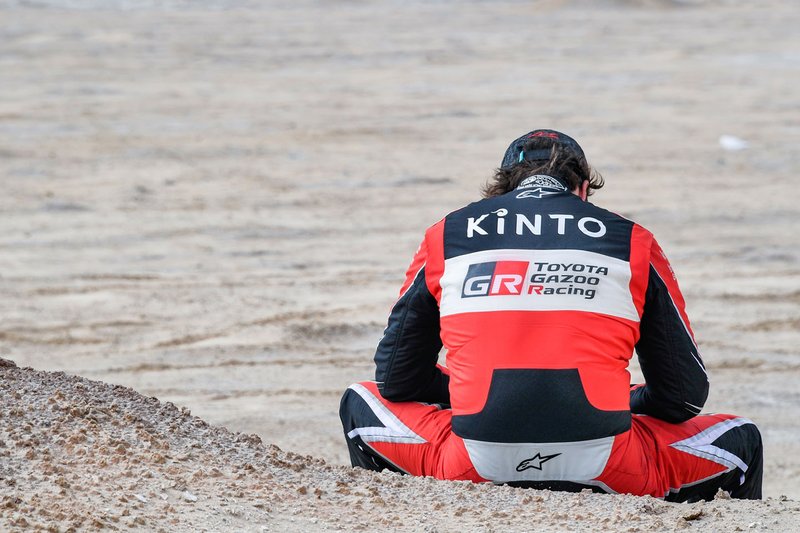