X-raid Mini driver Carlos Sainz has scored his third stage win of the 2020 Dakar Rally to further extend his advantage in the general classification.

Sainz, chasing his third Dakar win, picked up where he had left off in the first half of the marathon, as delivered Mini’s sixth stage win from seven in this year’s Dakar so far.

Sunday’s Riyadh – Wadi ad-Dawasir run featured the event’s longest timed special at 546 kilometres, yet did not cause any major swings in the battle for overall victory.

The Toyotas of reigning champion Nasser Al-Attiyah and local driver Yasir Seaidan were setting the pace through the first half of the test, but Sainz jumped ahead soon after the midway point and ended up beating Al-Attiyah by two minutes at the finish.

Sainz’s advantage over Al-Attiyah in the overall standings is now exactly 10 minutes.

The other X-raid Mini buggy of Stephane Peterhansel opened the road and though Sainz caught up to him in the stage, Peterhansel was able to minimise his time losses by finishing just 2m53s slower, which leaves him nine minutes off Al-Attiyah and 19 off Sainz with five stages left to run.

Yazeed Al-Rajhi in the Overdrive Toyota was seven minutes off Sainz’s pace and continues to run a comfortable fourth in the general classification as he extended his advantage over fifth-placed Orlando Terranova in the Mini 4x4.

Mathieu Serradori, who had entered the day in sixth in his Century buggy, has slipped behind his Toyota chasers – Giniel de Villiers and ten Brinke – as a result of getting stuck on a dune in the opening kilometres of the stage.

Seaidan, who had been fastest early in the stage, wound up 13 minutes adrift at the end of the special.

Two-time Formula 1 champion Fernando Alonso was sixth on the day, less than eight minutes behind Sainz, and is set to end the day not far off a top-10 spot in the overall order.

The day’s proceedings were overshadowed by the loss of bike class competitor and 2015 Dakar runner-up Paulo Goncalves, who passed away after a crash midway through the test.

Despite having to open the road on Sunday, Andrey Karginov continued to dominate the Trucks race as he edged his out-of-contention Kamaz stablemate Andrey Sotnikov by three seconds to claim the stage win.

Maz's Siarhei Viazovich has long consolidated third place - as he sits over an hour ahead of Czech drivers Ales Loprais and Martin Macik - but has been unable to keep up with the Kamaz pair, and now trails Karginov by more than three quarters of an hour. 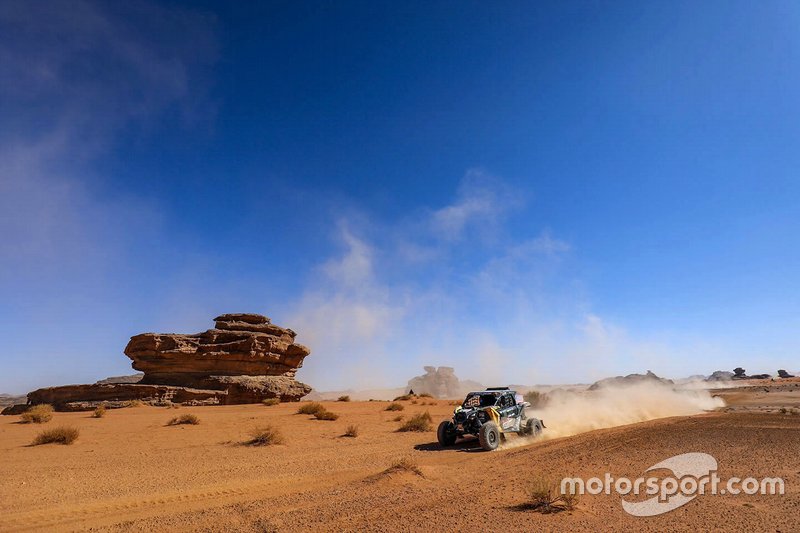 Lopez lost half an hour late in the stage, and now trails Currie by 32 minutes, with only Sergey Karyakin and Jose Antonio Hinojo Lopez also within an hour of the leader.

Guthrie, who was Red Bull's sole representative in contention with Hildebrand and Despres competing under the 'Dakar Experience' rule, retired with mechanical issues.