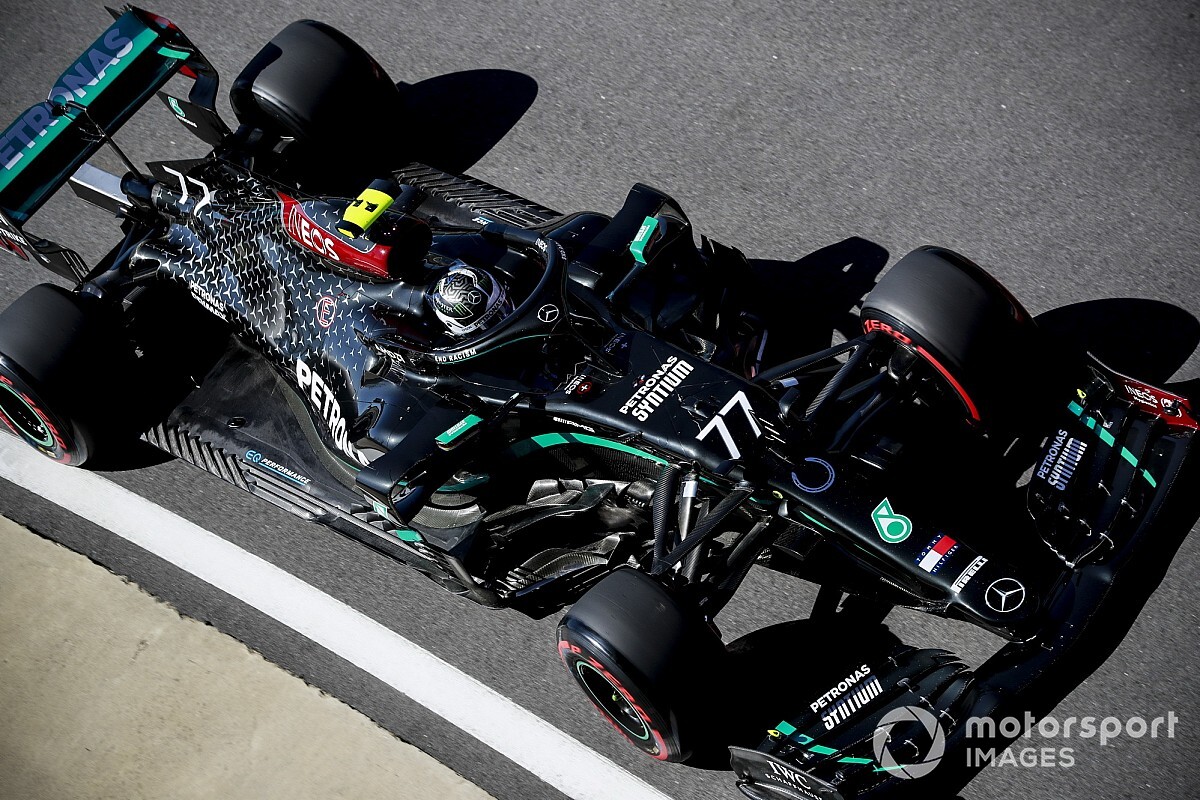 Mercedes eased to a 1-2 finish in first practice as drivers got their first chance to sample Pirelli's softer tyre selection for the second Silverstone race weekend.

All drivers opted to complete all of their of running on the C4 tyre, which is the soft compound for this race and was not used at the British Grand Prix last weekend.

Many reported high wear on the soft compound as the track temperature rose to 45ºC during first practice.

Bottas set his fastest time of 1m26.166s on the tyre en route to the head of the timing screens on Friday afternoon, beating Hamilton by one-tenth of a second in the final classification.

Mercedes was able to dominate proceedings once again as nearest challenger Max Verstappen finished over seven-tenths of a second off Bottas' pace, taking third for Red Bull.

Verstappen did not set his first timed lap until an hour had passed in the session after a number of changes were made to his car, and had a near-miss with Ferrari's Charles Leclerc while on a hot lap.

Nico Hulkenberg led Racing Point's charge in fourth place as he finished within half a tenth of a second of Verstappen's effort, having only been confirmed this morning as racing in place of Sergio Perez, who remains positive for COVID-19.

Leclerc took fifth place for Ferrari, almost nine-tenths of a second back from Bottas' headline time, and was over four-tenths clear of teammate Sebastian Vettel in seventh place.

Red Bull's Alexander Albon was sandwiched by the Ferraris in sixth place, but reported recurring tyre issues through the session and said he "almost crashed" at Copse while trying to improve on his fastest time.

Lance Stroll finished eighth for Racing Point, over half a second down on teammatemate Hulkenberg's time, while Daniil Kvyat and Esteban Ocon completed the top 10 for AlphaTauri and Renault respectively.

Pierre Gasly took 11th in the second AlphaTauri car, but reported late in the session there was "no rubber" remaining on his left-rear tyre, again fanning concerns about tyre wear in the hot practice conditions.

McLaren failed to breach the top 10 in FP1 as Lando Norris and Carlos Sainz finished 12th and 14th respectively, split by Haas driver Romain Grosjean. Sainz also reported high wear, saying his tyres were "destroyed" by the end of the stint.

George Russell finished as the lead Williams in first practice, taking 15th ahead of teammatemate Nicholas Latifi, while Daniel Ricciardo finish a lowly 17th for Renault.

Kimi Raikkonen ended the session in 18th place for Alfa Romeo, three-tenths of a second clear of Robert Kubica, who took over from regular teammatemate Antonio Giovinazzi for the session.

Kevin Magnussen propped up the order in 20th place for Haas.