Lewis Hamilton set the fastest time ahead of Valtteri Bottas in final practice for Formula 1's 70th Anniversary Grand Prix, as the fragile nature of the soft tyres dominated proceedings. 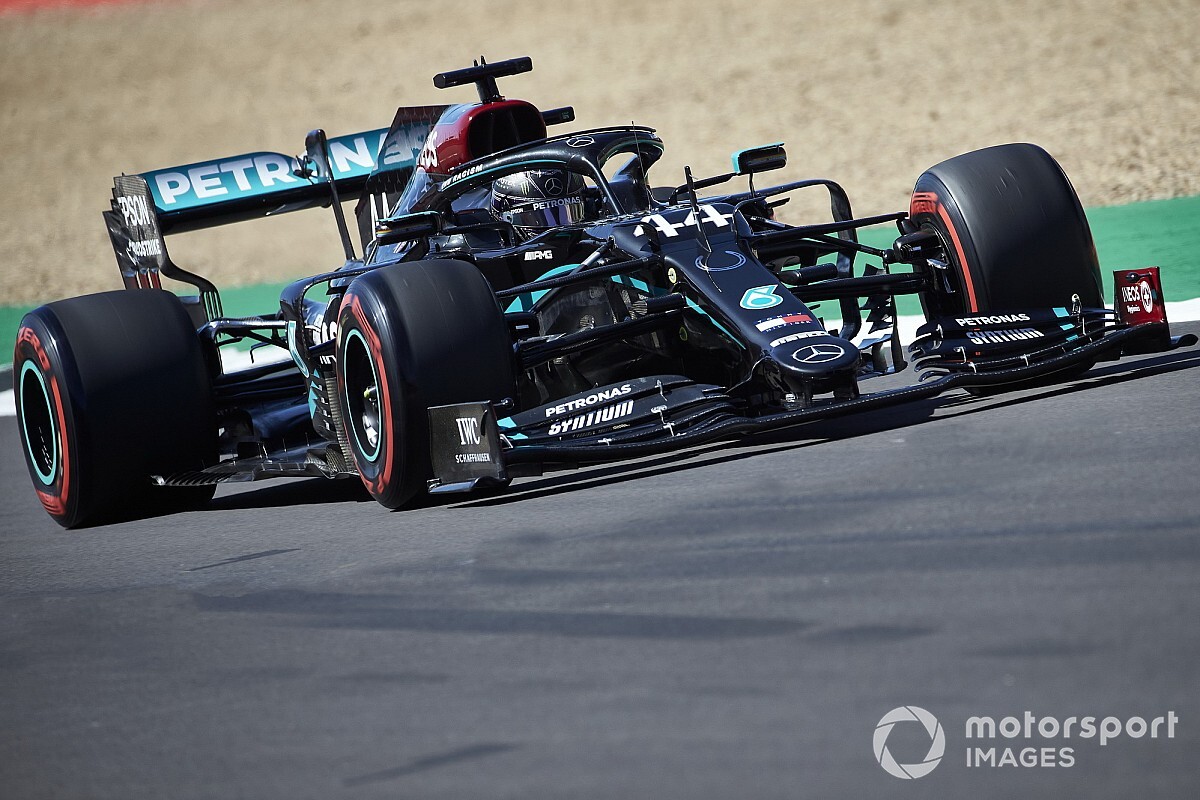 McLaren's Lando Norris ended up third behind the two Mercedes drivers on the medium tyre, while Red Bull driver Max Verstappen experimented with extremely slow cool-down laps in an attempt to set a fast time on a second lap on the C4 Pirelli rubber.

Verstappen was able to set his fastest time after extending his final soft-tyre effort to a second flying lap after his initial one was compromised by an incident with Racing Point's Lance Stroll.

On another hot and sunny day at Silverstone, where the wind has completely reversed from the way it was blowing on Friday to now give a tailwind down the Hanger straight, it was Norris who set the initial pace in the final 60-minute practice session with a 1m29.236s.

He exchanged early benchmark at the head of the pack with Ferrari's Charles Leclerc before the Mercedes pair emerged on the softs after 20 minutes had passed.

Bottas immediately moved to the top spot with a 1m27.509s despite a small lock up at the Loop, with Hamilton ending up 0.017s adrift after his own first flying lap.

After a brief trip to the pits, Bottas reemerged to improve the fastest time to a 1m27.462s, but after his own trip back to the Mercedes garage Hamilton moved ahead for the first time with a 1m27.280s.

But both Mercedes drivers were then usurped by Norris's effort on the medium tyres, which is likely to be the tyre most drivers in Q2 will run in qualifying to avoid using the soft tyre – which requires management from as early as the first lap on a stint – in the race.

Norris headed the times with that 1m27.202s with 20 minutes of FP3 remaining, before the Mercedes drivers returned to the fray to seal the top positions.

Bottas initially took first with 1m26.784s on the softs, but a few minutes later Hamilton blitzed his way to the fastest time of the session with a 1m26.621s to ended up 0.163s clear of his teammate.

Norris switched to long-run data gathering after posting what stood as the third fastest time to the end – as McLaren did not do any running on tyres other than the softs on Friday – and he was the only driver in FP3 to post their fastest time on the mediums.

Leclerc was regularly the fastest driver in the opening sector and he finished fifth ahead of Verstappen.

The Red Bull driver's best time came after he had come across Stroll going slowly through Becketts and had to abandon that lap – with the incident noted by the event stewards.

After a cool-down tour, Verstappen set his personal best with a 1m27.455s to slot in ahead of his teammate Alex Albon.

Earlier in the session, Verstappen had lapped so slowly after posting a fast time on the softs that he twice registered as "Stopped" on the timing screens and posted a lap that took over three minutes to complete.

But the tactic seemed to pay off as on both occasions Verstappen tried to set a time on a second run with the softs he improved.

Esteban Ocon and Carlos Sainz rounded out the top 10, with Sebastian Vettel down in 13th in the second Ferrari after his engine failure at the end of FP2.

Both Ferrari drivers had fresh engines installed in their SF1000s ahead of FP3.