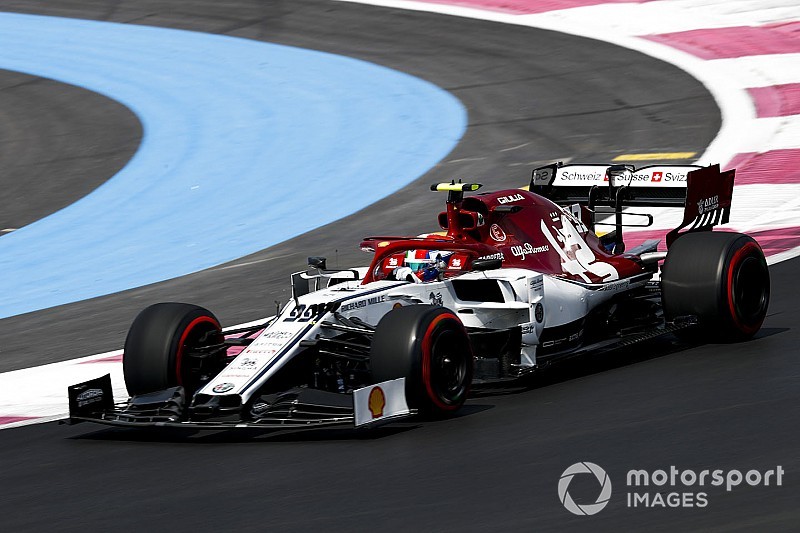 Alfa Romeo boss Fred Vasseur says his team will have a "big" update for its car for the British Grand Prix, but insists the outfit must take it "a little bit easy" after returning to the points in France.

Kimi Raikkonen matched his best result of 2019 when he finished seventh at Paul Ricard, gaining a spot from Daniel Ricciardo when the Australian was penalised after their fraught last-lap battle.

Alfa Romeo had not scored any points since Baku, and the French GP result allowed it to overtake Toro Rosso and Haas in the standings.

Vasseur admitted that the team is not confident yet that it has solved its tyre issues, and urged it to stay calm ahead of the introduction of more updates in the upcoming races.

"Sometimes Sunday evening you have the feeling that you understand something, the next Friday, you are nowhere," he told Motorsport.com.

"We have to stay calm, and take it a little bit easy, and have a good analysis. I'm not sure that we sorted out all the issues and the questions we have with the tyres so far.

Speaking about the Paul Ricard result, he said: "It's a great feeling for the team, because you're also pushing hard when you're not in the points.

"It was a bit frustrating, because sometimes the pace was there and we did mistakes. So to be back is a great feeling, and a good reward for the job done.

"Kimi did a very strong race, it was not easy between the two Renaults from the first lap to the last corner. The pace was there, Gasly was slower than us in the group, and we were catching up even Sainz and Norris at the end. It was nice to be back in the points."

Vasseur was encouraged by the form of Antonio Giovinazzi, who made Q3 in France but struggled in the race as he was one of only two drivers stuck on the soft tyres for the first stint after using them in Q2.

"To start with the soft was difficult, and then he was out of the sequence. But then we have to keep in mind the positive point that he was in Q3. Picking up the pace takes time, but if he is able to do a good job in qualifying, the next step will be the rest.

"It was probably the worst situation to P9 or P10 with the softs. It won't be always like this, if he can be in Q3 with the same tyres as the other ones, it will be good."

Promoted: Inspiring the next generation of female engineers