Formula 1 tyre supplier Pirelli has revealed the teams' selections for the opening round of the 2020 championship, the Australian Grand Prix.

F1 continues with 2019-specification tyres this year following the teams' unanimous rejection of the intended 2020 spec, and Pirelli's range of C2, C3 and C4 tyres in Melbourne will thus be identical to what had been made available for the opener last year.

Many teams have gone for an unchanged distribution of tyre sets for this year's Australian GP, among them Red Bull and Ferrari – although the latter has swapped selections for Charles Leclerc and Sebastian Vettel, giving Vettel an extra C2 hard set and Leclerc an extra C3 medium.

Pre-season favourite Mercedes, meanwhile, is among the teams to make a change, with both Lewis Hamilton and Valtteri Bottas getting an extra set of the C4 soft, taking them to 10 overall.

Renault, the only team to opt for 10 sets of the C4 last year, will do so again, but this time will be one of four teams picking the largest amount of the softest compound – it and Mercedes joined by Alfa Romeo and Haas.

Racing Point is alone in the field in limiting its drivers to eight sets of the C4 each. Only Williams had done the same as the Silverstone-based team last year, but this time George Russell and the 2020 field's only rookie Nicholas Latifi will have nine sets of the C4 each. 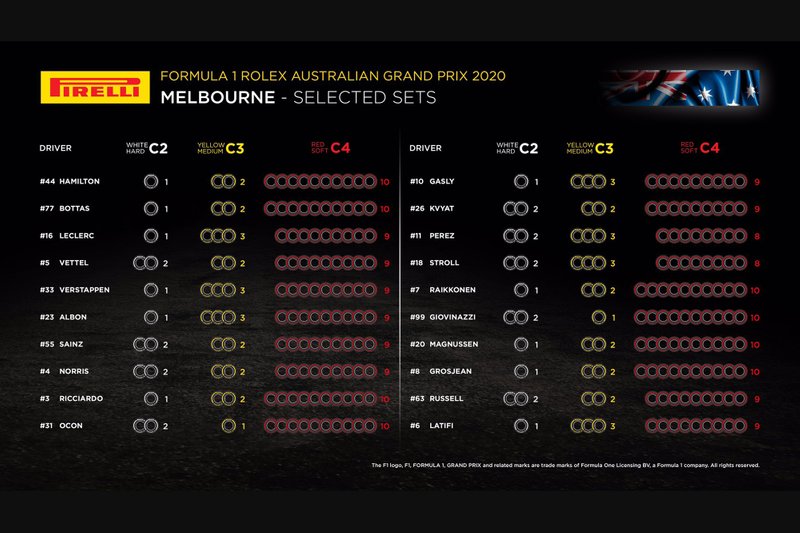 F1 must be "incredibly responsible" in coronavirus response