How to tell Pirelli’s new F1 tyres apart in testing 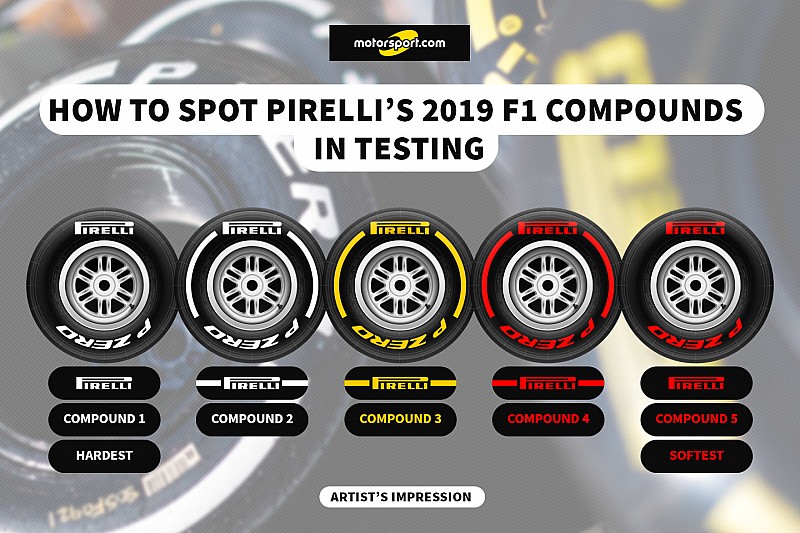 Pirelli has outlined how it will identify its five new Formula 1 tyre compounds in pre-season testing, following the removal of the previous ‘rainbow’ range.

The Italian company will provide five compounds this season, compared to seven in 2018.

Pirelli will use three nominated colours to identify tyres at races in 2019: the white will be the hard, the yellow will be the medium and the red will be the soft.

It has confirmed that those three colours will be used in testing, but as there are more compounds than colours they will be marked differently so people can tell them apart.

There will be five compounds available to Pirelli this year:

Compound 1 (the hardest) will be marked with white Pirelli branding, but without the lines around the outside wall of the tyre

Compound 2 will be marked with full white branding

Compound 3 will be marked with full yellow branding

Compound 4 will be marked with full red branding

Compound 5 (the softest) will be marked with red Pirelli branding, but without the lines around the outside wall of the tyre

Pirelli considered continuing to use the multi-coloured way it branded each compound last year for testing.

However, it decided to adapt the system it wants to use throughout 2019 to avoid creating extra confusion.

Compared to last year, Compound 1 is the hardest and is the hard compound from 2018, while Compound 5 is the softest and the same as last year’s hypersoft.

Teams and media will know in advance which of the five compounds are in use at each grand prix, but the new system is designed to make it easier for fans to identify and follow.

The "dangerous" AI tool that could dominate F1