It is by now not a big secret the Spanish Campos-Meta Formula One outfit already has financial problems, the team wasn't able to pay Dallara, who developed the chassis, and engine supplier Cosworth is also still waiting for the first payment from ...

It is by now not a big secret the Spanish Campos-Meta Formula One outfit already has financial problems, the team wasn't able to pay Dallara, who developed the chassis, and engine supplier Cosworth is also still waiting for the first payment from Spain. It has been said the Campos-Meta team owes Dallara 7 million Euro, and because it hasn't been paid yet, Dallara decided to stop the development work on the chassis. Last week Campos-Meta told the media they would -- again -- make an announcement about the team's future next Tuesday (yesterday), but just like the previous time, there was nothing else but silence from the Spanish team. There are a number of rumors circulating about the future of the team, so here is an overview about what we sofar have heard. 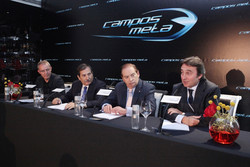 On January 13, the first rescue scenario emerged, A1GP boss Tony Teixeira would step in to rescue the team, and he was willing to invest 20 million Euro. He was interested in creating a A1GP financed Formula One team, to help young and promising A1GP drivers to become successful in Formula One. Unfortunately, Teixeira has huge financial problems with his A1GP series himself, and he is just about as good as Campos-Meta in maintaining radio silence. During the last few months of 2009 all A1GP races were cancelled, and neither Teixeira, nor the A1GP organization has since then given any explanation about what was going on.

Later it became apparent that A1GP has a huge debt of about 600 million Euro, and now, almost five months later, there is still now news about the future of the A1GP series. It is therefore safe to assume A1GP has ceased to exist, leaving a 600 million Euro debt in its wake, and it is very unlikely Teixeira will be able to raise the 20 million Euro to rescue Campos-Meta. All assets of A1GP, including the 24 Ferrari designed and Ferrari powered cars, have been impounded, and there is no way Teixeira can move 20 million Euro from A1GP to Campos-Meta.

On February 4, Campos-Meta reported that the relationship with Dallara was still 'in place', and on February 8, following reports in Spanish newspapers that Dallara had lost its patience and had sold the rights of the Dallara chassis to the Serbian based Stefan GP outfit, Dallara now claimed that Campos-Meta was given some extra time to pay the 7 million Euro for the chassis the Italian builder has designed for the Spanish team. Campos-Meta at the same time reported they would announce a new rescue plan a few days later, but unfortunately the deadline expired without any announcements from Campos-Meta or Dallara.

On February 11, the second rescue scenario emerged. According to rumors in the German and Spanish media, Bernie Ecclestone and Campos-Meta investor Spanish entrepreneur Jose Ramon Carabante had joined forces to rescue the team, Adrian Campos would leave the team and Carabante would take over the lead of the Campos-Meta outfit and former Force India boss Colin Kolles would become the new team principal. The German media claimed that the German car manufacturer Volkswagen would take over the team in 2011.

The deal would be confirmed on January 15, yesterday, but the deadline again passed without any announcements. The German media did some detective work on the VW takeover, and came to the conclusion it was highly unlikely such a deal existed. VW-Sportchef Kris Nissen stated in the German Auto, Motor und Sport magazine: "I can't give you any comments, I only know the rumors from the Internet, and I have asked our driver Carlos Sainz during the weekend to inform me about what the Spanish newspapers say about it." German ex-Formula One driver Hans-Joachim Stuck, also employed by VW, was adamant the story wasn't true and said VW had no intention to get into Formula One, well, at least not before 2012. Why 2012? Because after 2012 there will be new engine regulations, and why would VW develop and build a Formula One engine that can only be used during 2011 and 2012, and again spend a huge amount of money to develop yet another engine for 2013?

And today, the German Motorsport-Total magazine came up with a report about a new rescue plan for Campos-Meta. According to the magazine, US F1 investor Chad Hurley isn't happy with the progress the by Ken Anderson and Peter Windsor managed American team has sofar made, and has decided to pull the plug and has stopped his financial support. Hurley is now considering to help Campos-Meta by paying the Dallara and Cosworth bills and merging US F1 and Campos-Meta into one team. Which would open the door for the Serbian Stefan Formula One team, they could take over the thirteenth and last slot for 2010.

So this is the latest developpement in the Campos-Meta saga, not really a happy story, and there is one thing that makes this story extra sad, if Campos-Meta doesn't make it to the grid of the Bahrain Grand Prix on March 11-14, it would also be the second time that Brazilian Bruno Senna, nephew of the legendary Ayrton Senna, signed a contract with a team that never made it to the start of the season...