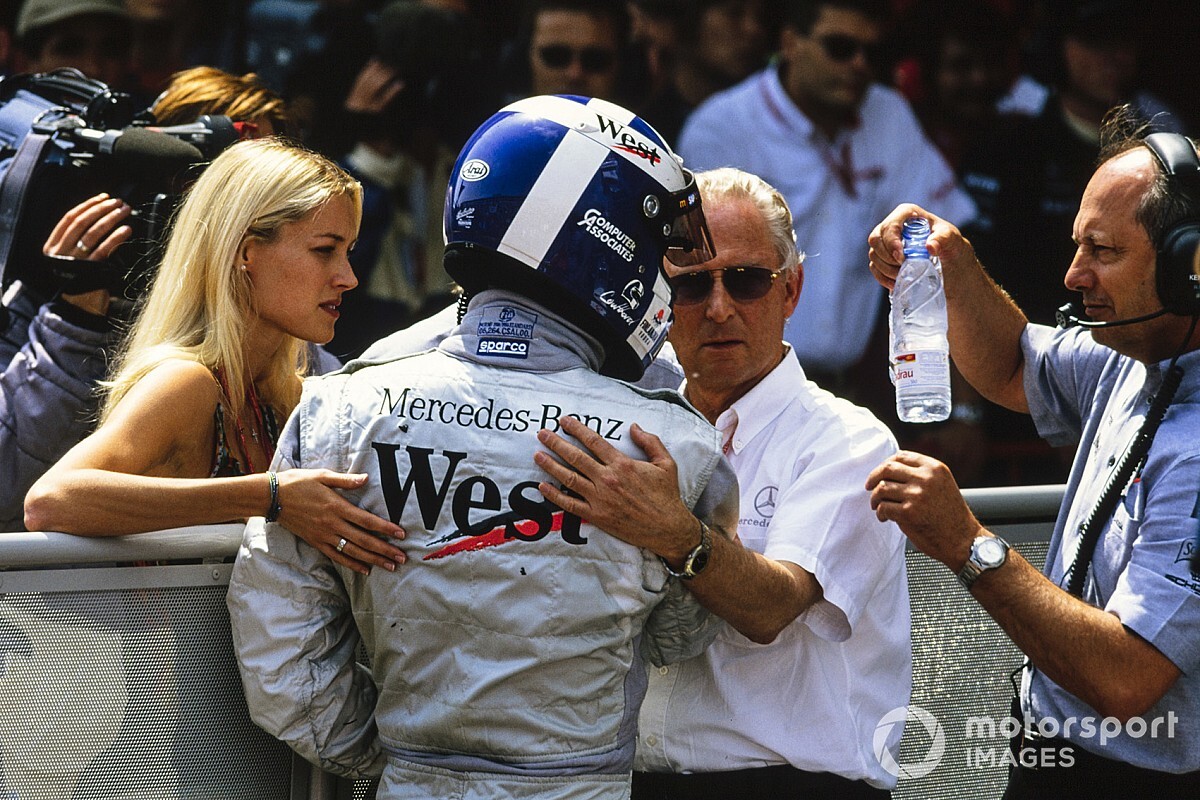 The 2000 Spanish Grand Prix was a resounding 1-2 finish for McLaren, as it bounced back from a Ferrari-dominated start to the season to get Mika Hakkinen’s title defense back on track. But the bravery of David Coulthard, to not only take part so soon after a near-death experience but to finish second, was the real talking point of the weekend.

Just a week after beating Hakkinen to victory at Silverstone, teammate Coulthard was on board a chartered LearJet when it suffered an engine failure en route to Nice.

While making an emergency landing at Lyon, the plane crashed, killing the two pilots. Coulthard’s girlfriend, the fashion model Heidi Wichlinski, and his personal trainer Andy Matthews were able to escape the wreckage. Coulthard returned to the plane, “to see if I could do anything for the pilots, but there was nothing I could do to help.”

Following hospital checks, and a consultation with F1 doctor Prof. Sid Watkins when he arrived at the Circuit de Catalunya, Coulthard was cleared to race in Barcelona. But, ahead of the race, he told ITV’s Martin Brundle that the tragic accident just days previously had affected him. 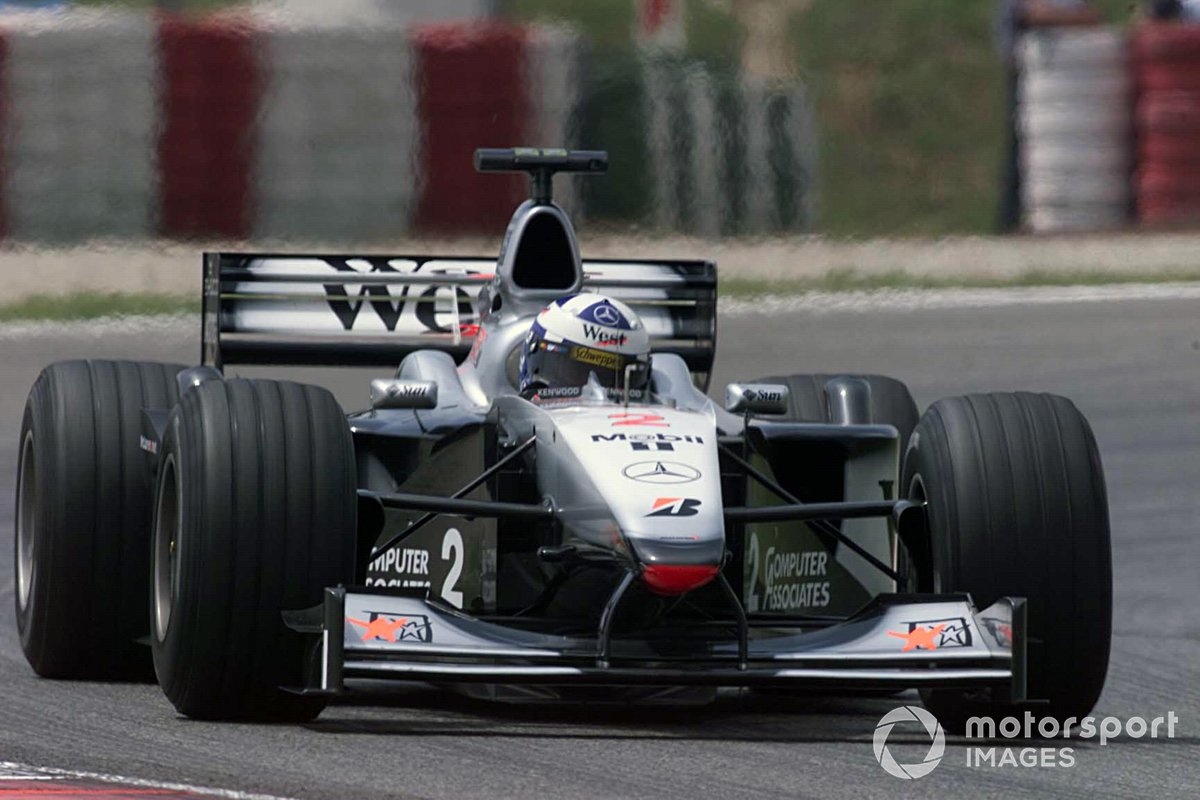 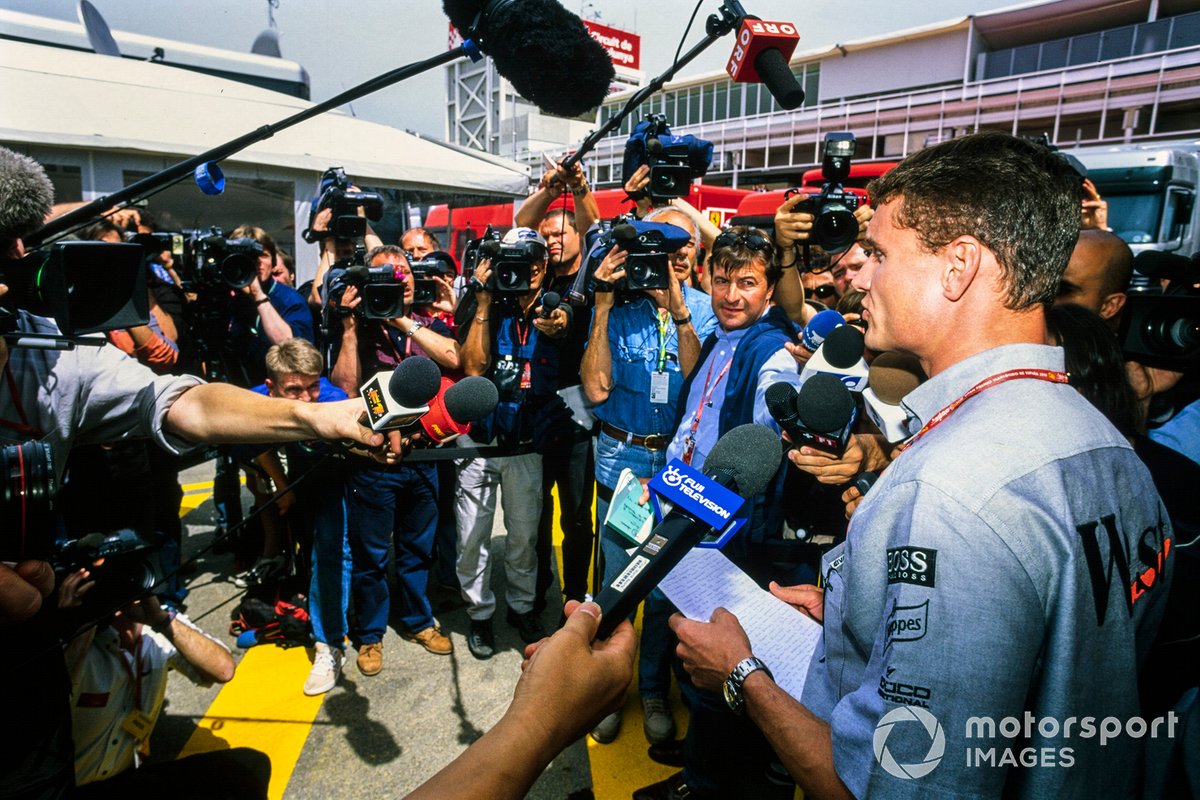 “You can’t have a situation like that which brings you so close to the realities of how fragile we are on this earth and not change in some way,” he said. “I have an increased sense of how lucky I am, how lucky I am in my life and what I have. I don’t live in the real world being a grand prix driver. It’s made me realise the importance of family and friends.

“I felt focused before, but I feel a renewed focus and a renewed determination to get out as much of every day as possible.”

Asked if he had encountered any physical problems in practice, he said: “No, not really, I’ve got a few little bruises but that is not going to affect the way I can drive the car. Obviously I expect to be a little more sore on Sunday evening than in a normal grand prix, because I’m starting in slightly worse physical condition. But from my first lap on Friday, I was quick and focused and thinking about how much I can get out of the car.” 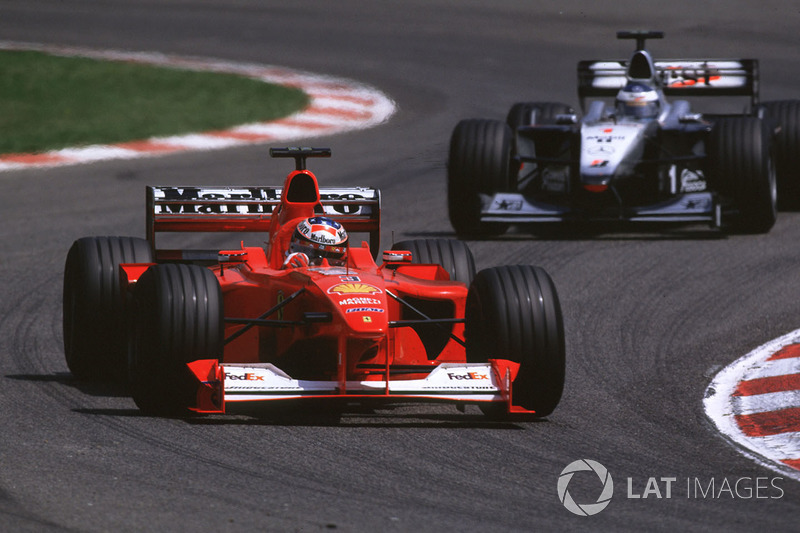 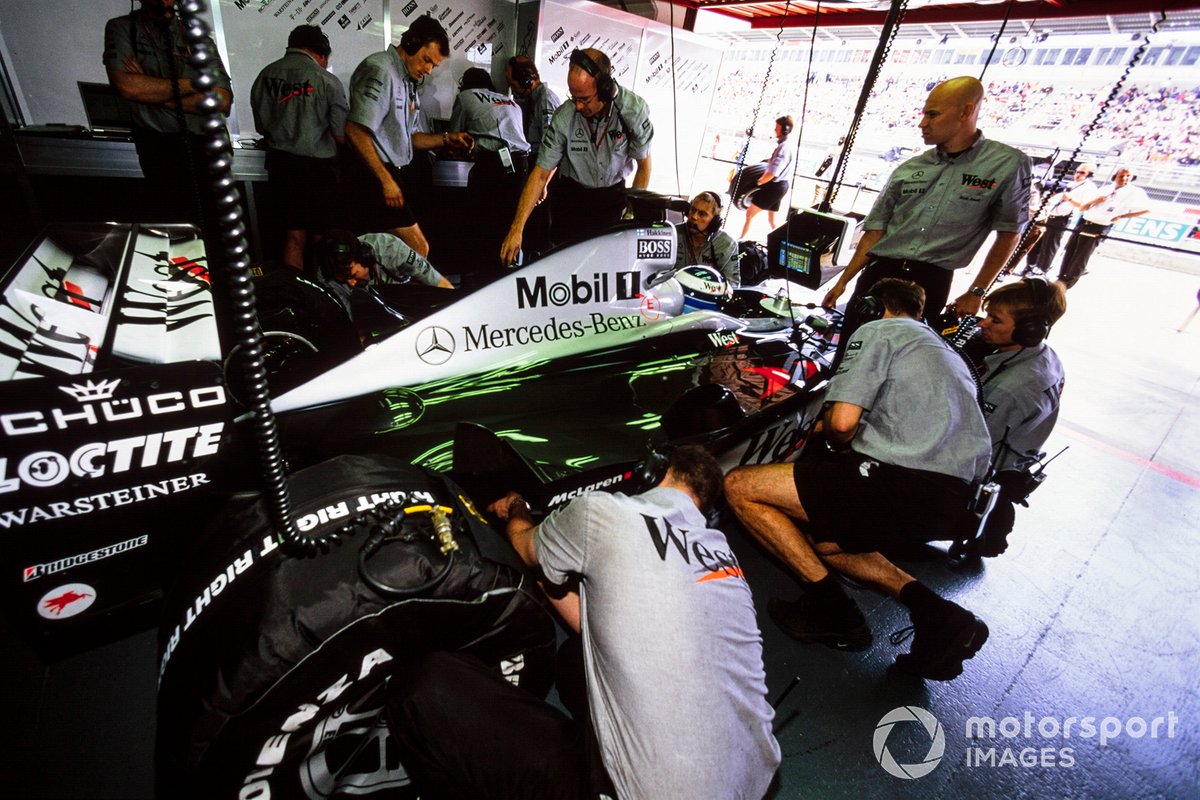 In qualifying, Ferrari's Michael Schumacher claimed his first pole position of the year by just 0.078s from Hakkinen, with their respective teammates Rubens Barrichello and Coulthard sharing the second row.

“It was very close today,” admitted Schumacher. “Certainly it is nice to be on pole position for the first time this season. I was not completely happy with the car, even though I had a clean run, so we made some adjustments but they did not work out the way I wanted.

“As for the race, the start will be important because it is easier to plan your tactics and control it in the lead. But we have proved this season we can also win from behind.” 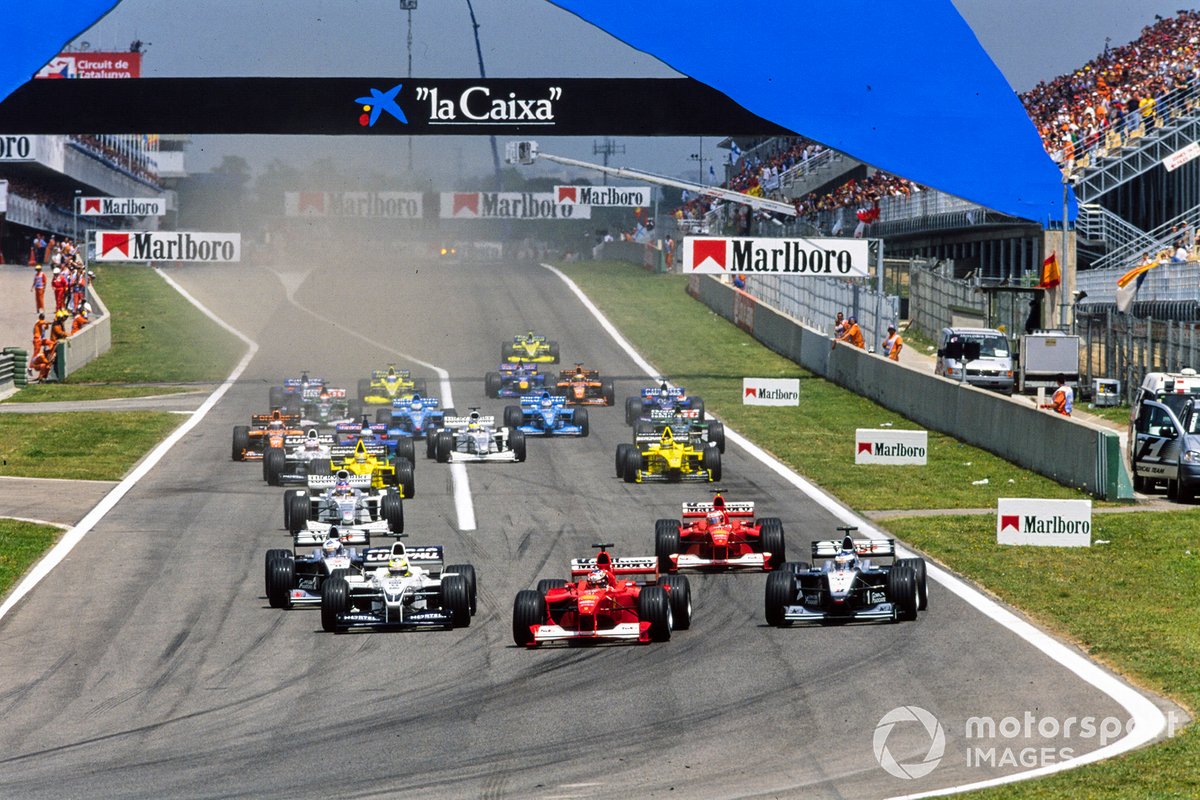 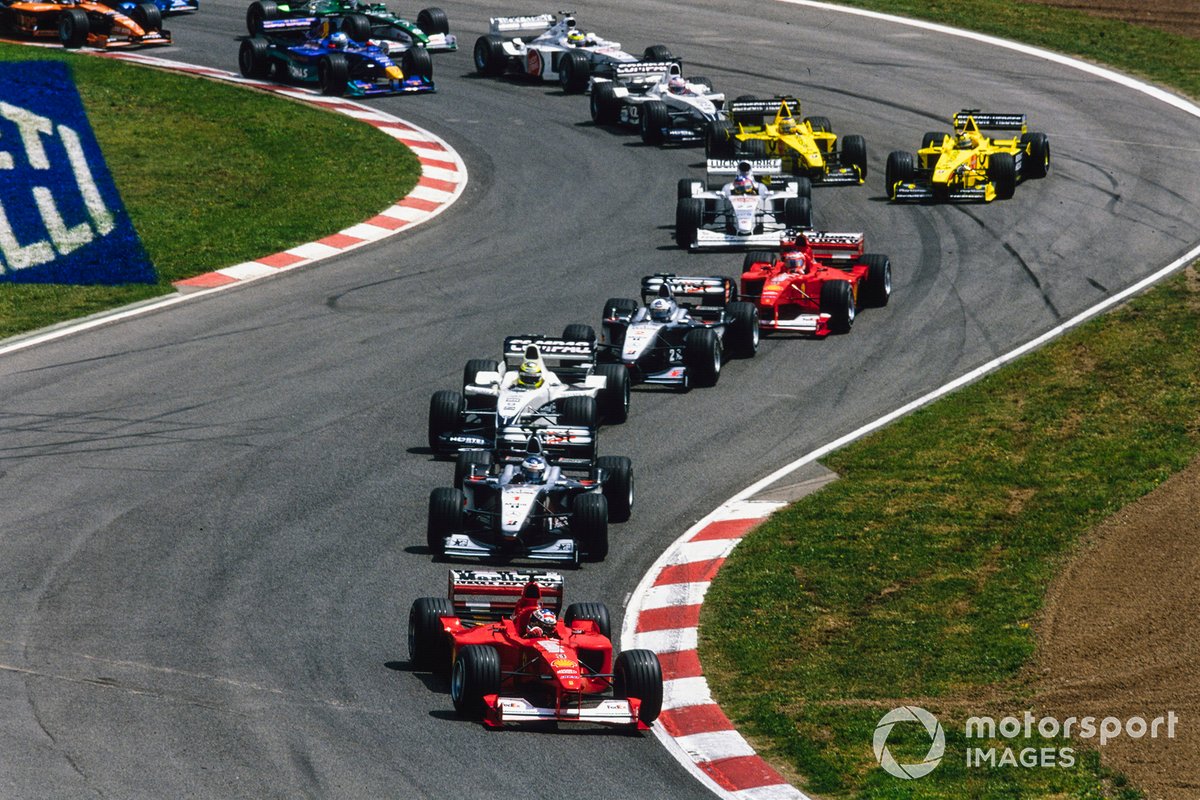 At the start, Hakkinen made the better getaway, but Schumacher chopped across him to hold the lead, with a fast-starting Ralf Schumacher sprinting up to third in his Williams.

Leader Schumacher’s race was going to plan until his first pitstop on lap 24. Refueller Nigel Stepney was still engaged with the car when Schumacher was released by the 'lollipop' holder, and although Stepney managed to hurriedly disengage the rig, Schumacher ran over him with his right-rear wheel, breaking Stepney’s ankle. Despite this, Schumacher continued to lead. 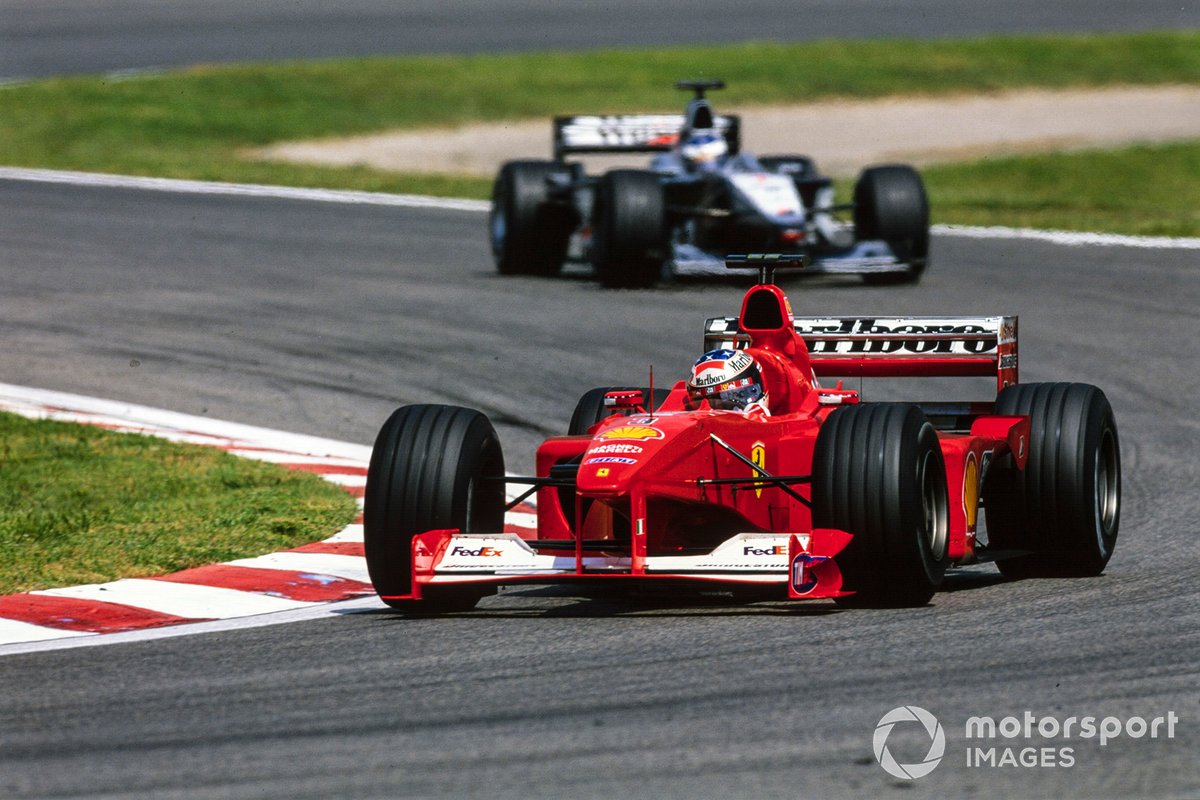 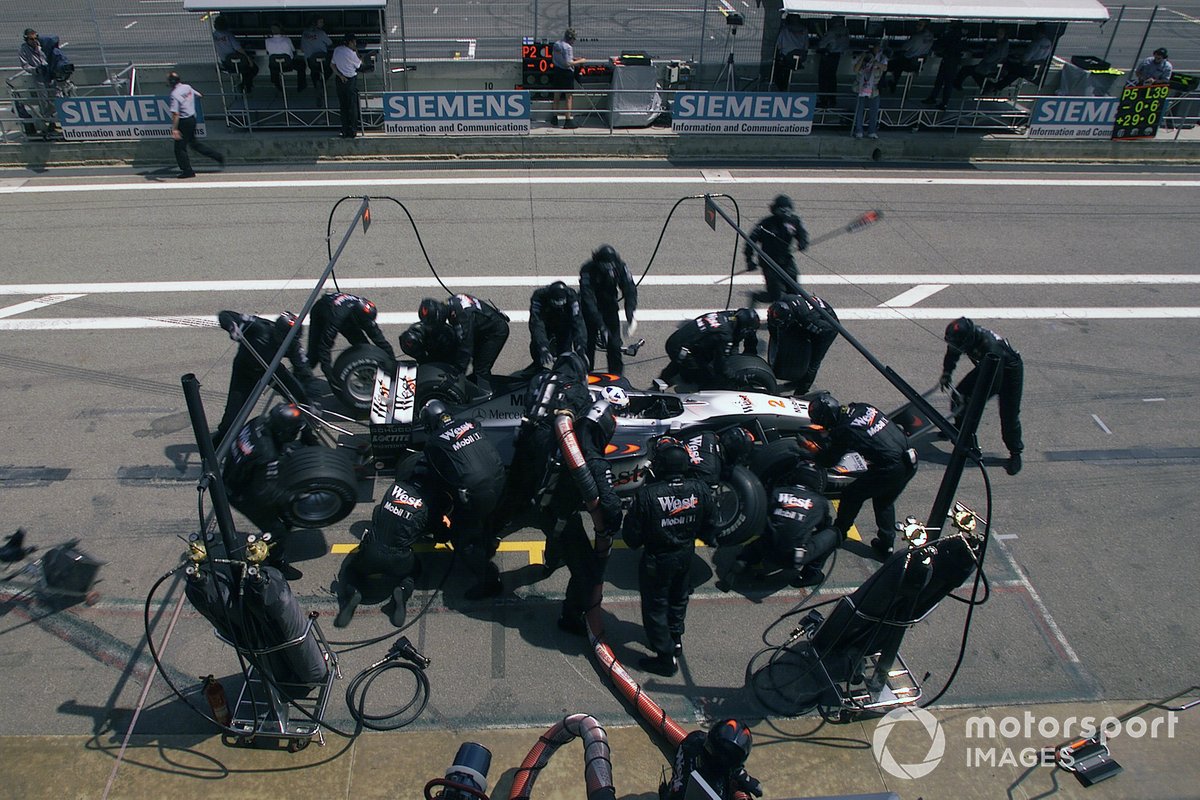 Coulthard also suffered a poor first pitstop, dropping back to fifth position after pulling away in second gear instead of first. But Schumacher’s race went from bad to worse in his second stop, as the reserve refueller struggled to get the hose attached, and he lost 10s.

A fired-up Coulthard was on a charge and caught Schumacher. After one aborted attempt to pass when Schumacher chopped him – “incredibly close and not entirely fair,” complained Coulthard – the Scot then pulled off a brilliant pass around the outside going into Turn 1 a lap later.

A struggling Michael, who had a slow puncture, then came under pressure from brother Ralf but, in a controversial move, he ran him wide in a corner to allow Barrichello past both of them. “All I can say is that racing is racing,” said Michael. Ralf refused to comment. 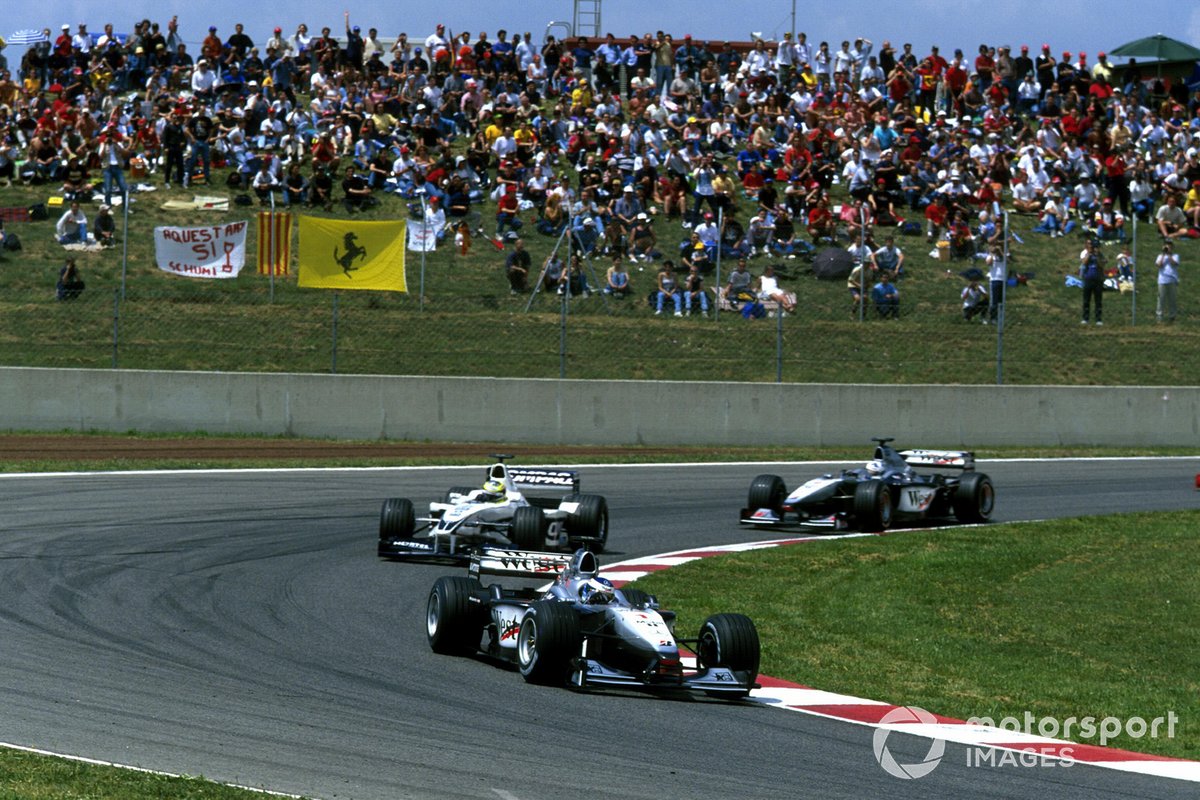 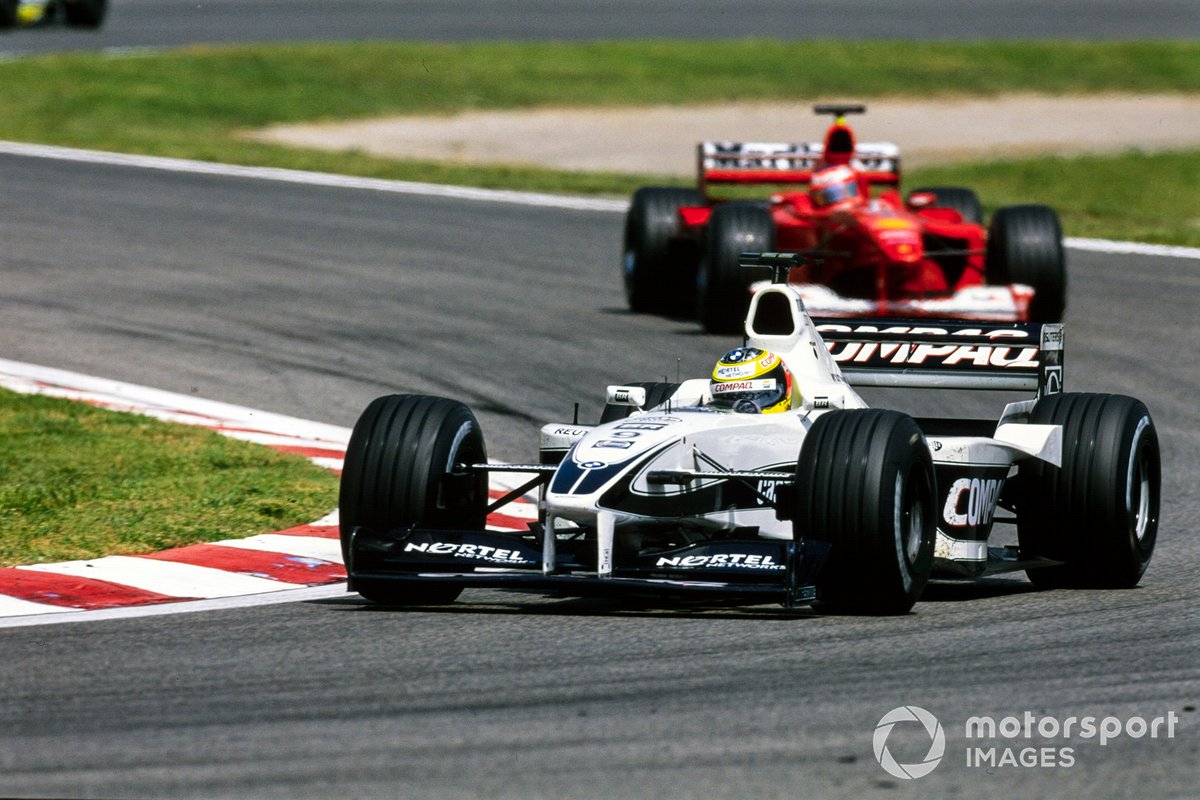 Hakkinen cruised to the finish to score his first win of the season, 16s clear of an aching but happy Coulthard at the conclusion of his dramatic week, with Barrichello third ahead of a silently fuming Ralf Schumacher.

“I can’t really find the words to explain how happy and relieved I am to have claimed my first victory this season,” said Hakkinen. “We have been so close before but today was the day and the team did a fantastic job. My start from second wasn’t ideal, despite having a lot of traction I didn’t get the clutch to bite properly. Fortunately Schumacher didn’t make a great start either, so we were side by side coming into the first corner. In the end I had to give way because I was on the outside.

“Schumacher managed to pull away during the first couple of laps but when his tyres started to go off I was able to catch him and could start putting him under pressure. The team did a great job in the second pitstop so I was able to take the lead.” 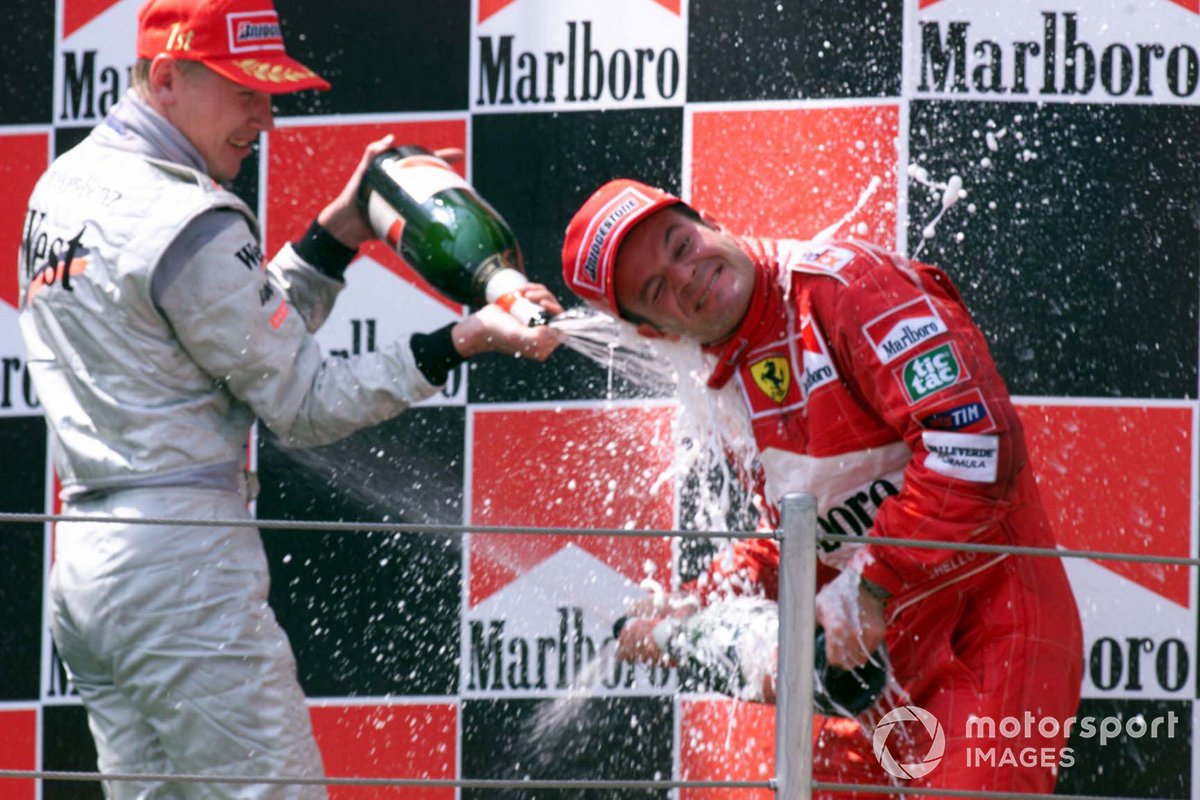 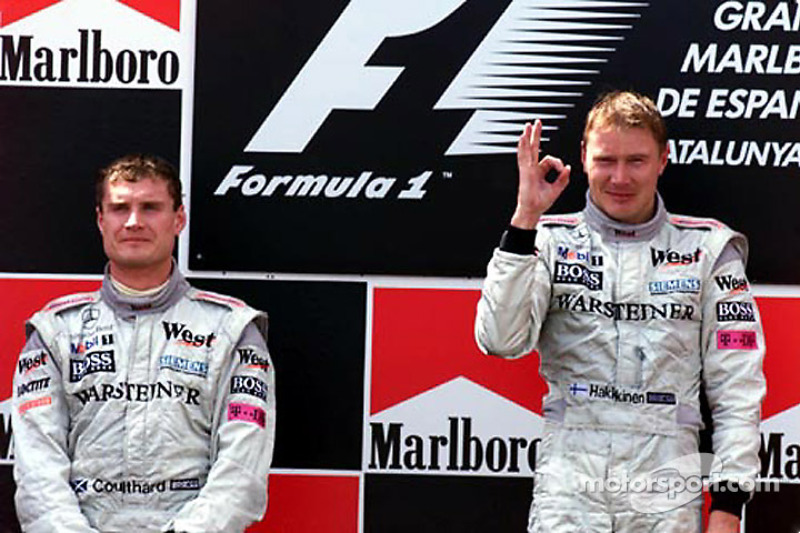 Coulthard said: “It’s great for the team to get another one-two victory. All in all, I’m pleased that we scored maximum points this weekend.”

Following his slow puncture, Schumacher inevitably had to pit for an extra set of tyres so could claim only fifth, and later admitted: “You cannot always have lucky races and today’s race did not go so well for us. We had a problem at the first stop and that gave us problems for the second one also.

“At the first one, the lollipop man lifted it and then put it down again. But it is impossible to stop that quickly. I felt I had driven over something and I looked in my mirror and saw a mechanic on the ground. I asked the team what happened, but they did not reply.

“Then I had a slow puncture and it was obvious that the race was out of our hands. I am not angry. I took two important points and we are still looking very strong for the rest of the season.” 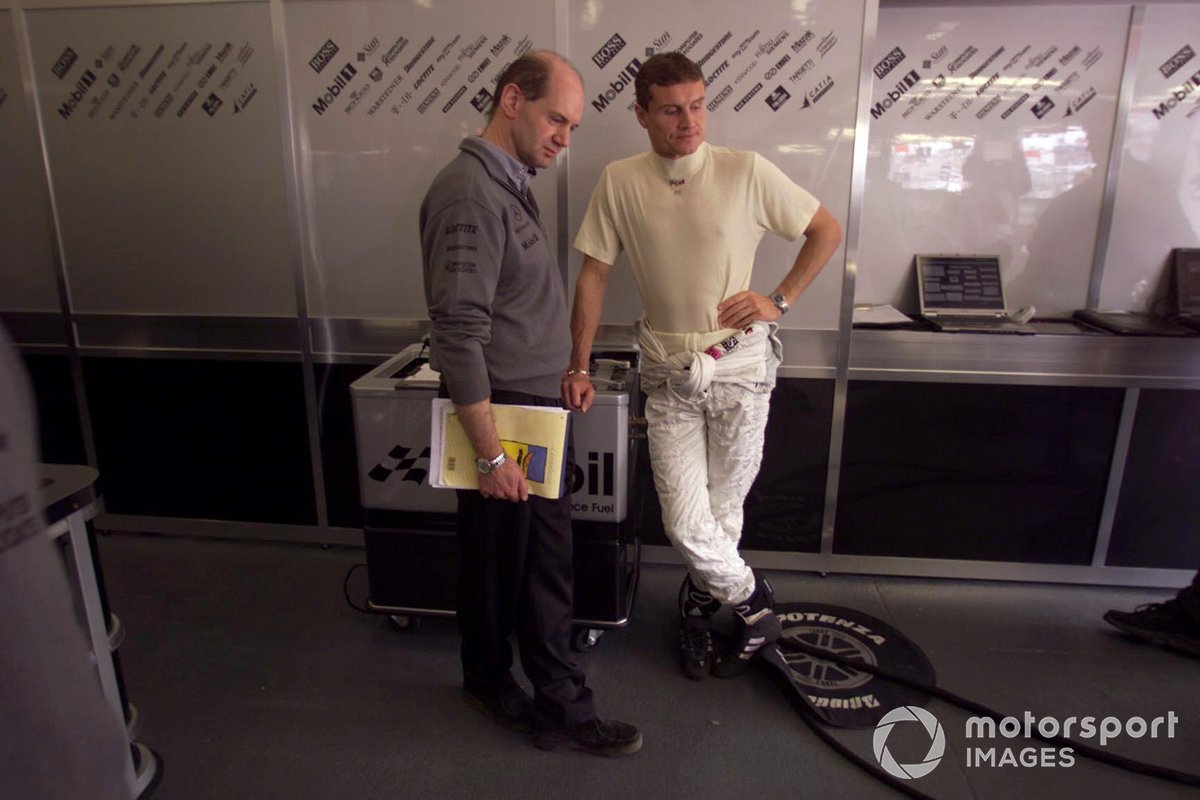 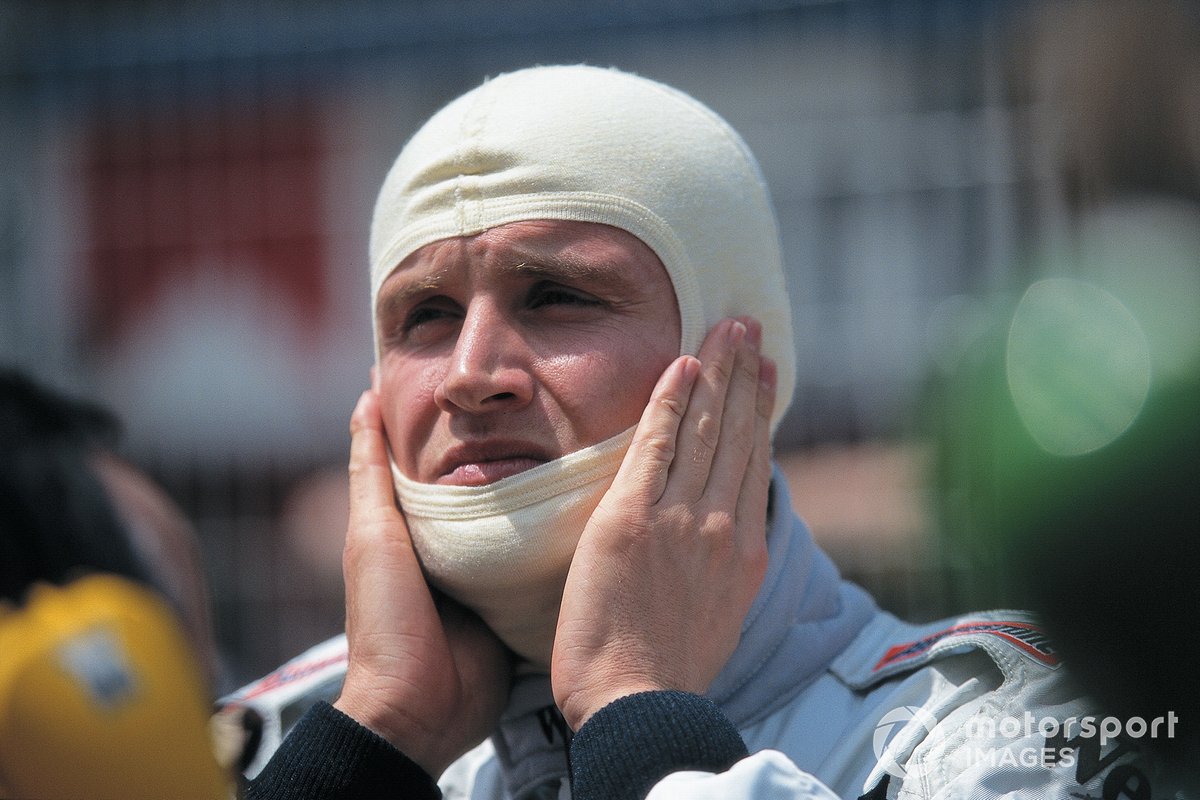 After the race, Coulthard went for a full medical checkup at London’s Princess Grace Hospital, where it was discovered just how much pain he'd had to deal with in the racecar, and how much he'd played it down. A team statement confirmed: “The inspection established that David has a bruised right chest wall and that the eighth, ninth and 10th ribs on his right side are cracked.”

Extra venues in contention for F1 races in 2020