Ever since aerodynamics became an important part in the performance of Formula 1 cars, flexible bodywork has been an ever-present issue.

The latest intrigue – surrounding what Red Bull is cleverly doing with its front wing – is just the latest chapter, but it is one that perhaps hints at a new direction for flexi-wings in F1.

The matter came up at the British Grand Prix when the attention of rival teams was caught by a unique characteristic that Red Bull's front wing displayed.

Frame-by-frame footage indicated that the outer footplate, which is already demonstrably different in design to its rivals and sits askew to the main plane, was rotating and flattening as load built on the wing.

While flexi-wings are in theory illegal, there is no suggestion that what Red Bull is doing is against the rule, because it fully passed all FIA checks when they were done in the pitlane.

Furthermore, it's important to point out that no part on an F1 car can be infinitely rigid, for if it were it would break off as load is applied. Tolerances for flexing are part and parcel of the scrutineering process.

The FIA ensures that the wing does not deflect vertically more than 15mm when a 1000N load is applied to the end plate, simulating the type of load you may expect on track.

The video shows the deflection test that was conducted up until 2013, with loads having been revised since to take into account the amount of flex that was being preloaded into the front wing by the leading teams.

Defeating these tests, whilst not strictly in the spirit of the rules - if there were such a thing - is part of F1's engineering challenge.

In the case of Red Bull, it has cleverly taken what it has learned in the past and applied it laterally, taking into consideration the increased load tests since its last real foray in this area and the revised front wing geometries used in 2017.

Rather than the entire wingspan flexing, as had become commonplace in the last flexi-wing war, circa 2010-2012, it has taken an approach similar to that which McLaren employed back then.

In that instance, the MP4-26's wing was observed to tilt back and forth as the load built, with pre-load built into the wing as the team looked to boost straightline speed whilst maintaining downforce for cornering.

The concept appears to be employed in a similar way on the RB13, but rather than the entire wing rotating, which could risk falling foul of the deflection tests, the designers have decoupled the main plane and endplate from the rearward flap stack and the outer footplate in order that it rotate and deform.

And this time the flexing is not just about minimising drag on the straights, for it is about better managing airflow entirely. This is a slightly different direction for flexi wing development.

Red Bull going its own way 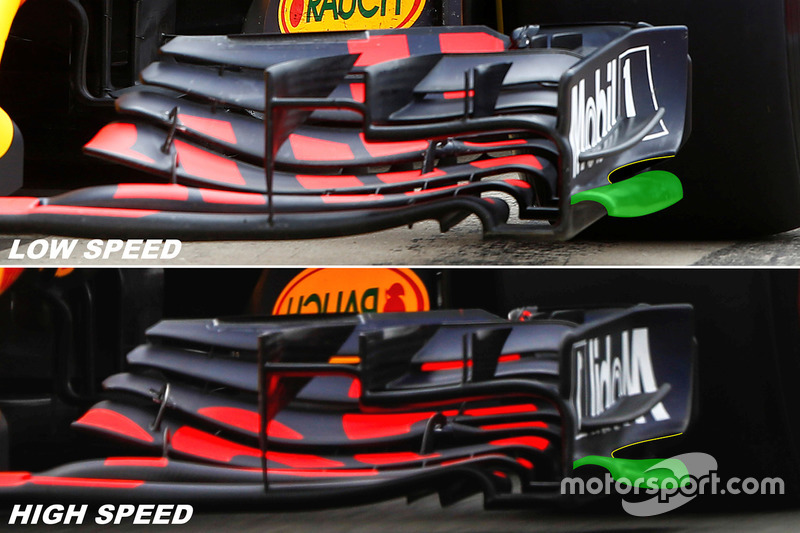 So what is happening?

When load builds on the flaps, it rotates the footplate with it (highlighted in green), gradually changing the position and shape of the footplate and the vortex it creates.

This not only has a direct effect on the performance of the front wing but is also favourable to airflow structures downstream, such as the wake shed by the front tyre, as well as flow moving under the floor toward the diffuser.

This handy trick is all about aeroelasticity, with the angle and shape of the footplate seemingly designed to move in accordance with the load placed on the wing. Red Bull is utilising its years of experience to create the desired effect.

It would also seem that a more aggressive use of this flexible footplate coincides with the almost full-time return of Adrian Newey, as the engineer famed with operating with ingenious solutions has found a way to outsmart those around him. 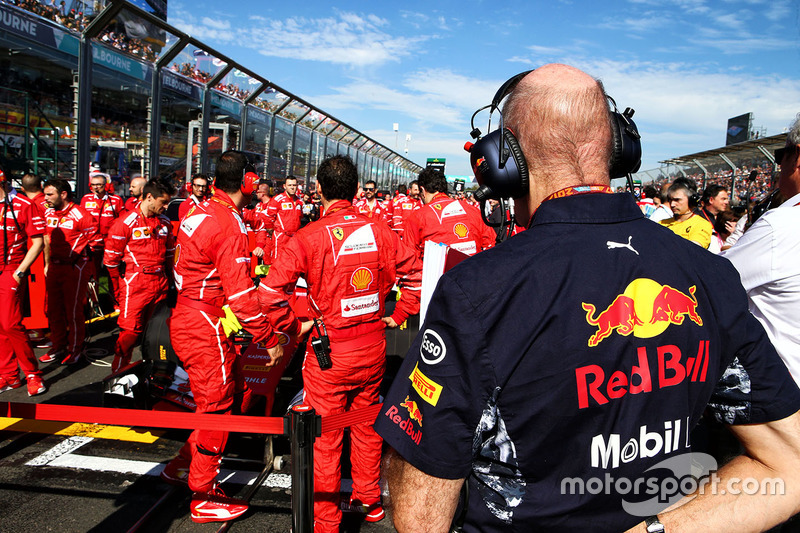 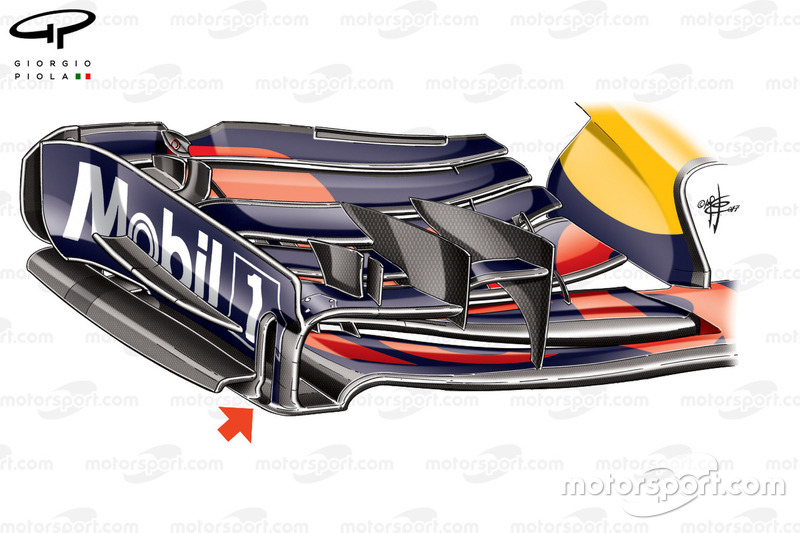 Red Bull introduced a new wing in Canada which not only featured a revision to the height of the footplate (arrowed) but also included a vertical slot just behind the endplate's leading edge. This allowed airflow to migrate in board and perhaps make up for the inevitable flow separation as the elements flex under load. 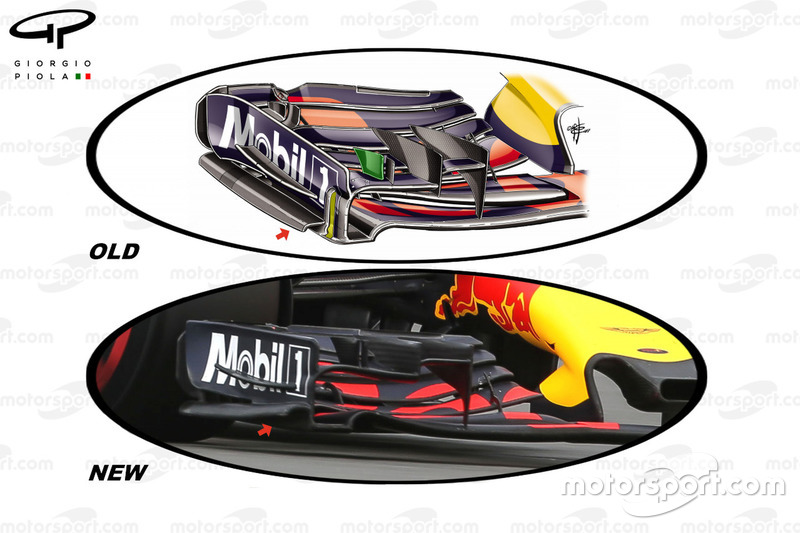 For Silverstone the footplate was raised a little further, as the designers looked to reshape the vortex it creates and also allow for the increased loads incurred at the high-speed circuit, something of high importance given the wing's penchant to flex. 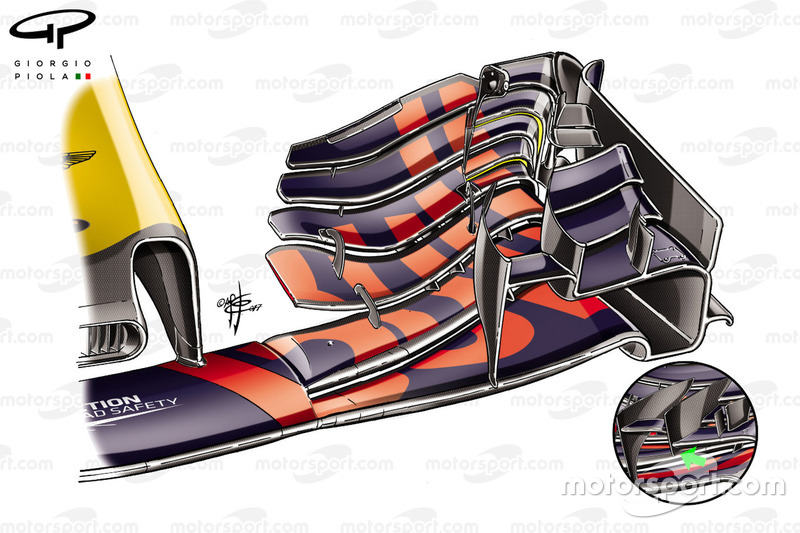 Allied to this change was the loss of the vertical slot in the endplate, made up for by the introduction of two additional slots in the outboard section of the wing (highlighted in yellow) which introduce energy into the outer section in order that flow not separate at higher angles of attack.

As we can see, even if Red Bull is a step ahead of it rivals, it will be pushing hard on making further improvements, as the wing concept helps to mitigate some of the straight-line speed losses it currently faces.