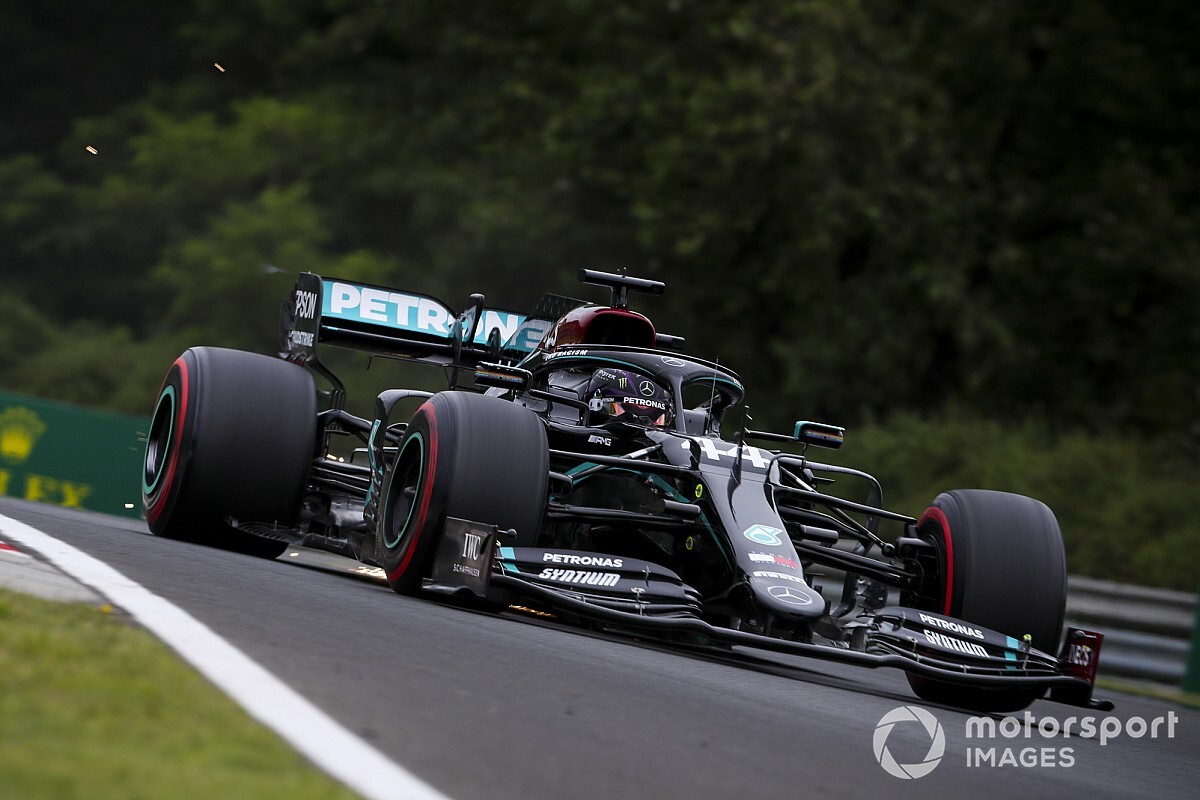 Lewis Hamilton led a Mercedes 1-2 ahead of the two Racing Point Formula 1 cars in the opening practice session of the 2020 Hungarian Grand Prix.

Red Bull, Mercedes' closest rival in the opening races of the season, had a low-key start to the weekend with P8 and P13 for Max Verstappen and Alex Albon, while Ferrari again finished well adrift of the practice pace-setters.

Under cloudy skies at the Hungaroring, Verstappen set the pace in the initial with a 1m19.536s – sparking his way around the track on the hard tyres.

The Red Bull driver lowered the P1 benchmark on subsequent laps in the opening 20 minutes of the 90-minute session before the Mercedes cars went on the soft tyres and set about sealing the two positions, which they held to the end.

Mercedes instructed its cars to stay out and collect data on the soft tyres due to a threat of rain – with a few spots falling during the very early laps – which they did, with a massive double lock-up for Hamilton at the first corner the only notable interruption.

At the 50-minute mark, Hamilton and Bottas switched to the hard and medium tyres respectively, and both drivers improved their best times at the head of the field.

Bottas retook first place with a 1m16.089s on his yellow-walled tyres, but a few minutes later Hamilton moved back to the top with 1m16.0003s – an ominously fast time on Pirelli's hardest rubber.

Sergio Perez, who also had a big lock up at Turn 1 where he ran close the barriers deep in the run-off, led his teammate Lance Stroll with third place.

That was 0.527s slower than Hamilton's leading time, with the second Racing Point driver a further 0.437s back in fourth.

Daniel Ricciardo, who ran with a large aerodynamic measuring device fitted to his RS20 during the early installation laps, finished fifth for Renault – ahead of the two Ferrari cars.

Sebastian Vettel was the lead driver for the Scuderia on a 1m17.238s, with Charles Leclerc 0.166s behind his teammate.

The Ferrari cars are running in the same specification as last weekend's Styrian GP, where they failed to finish after Leclerc triggered a clash between the team-mates on the race's opening lap, as the team brought the full update package it had been expected to introduce in Hungary forward by one event.

Verstappen finished FP1 in eighth place – sliding on his own soft tyre effort and ending up 1.432s slower than the leading Mercedes time.

Lando Norris and Esteban Ocon rounded out the top 10 for McLaren and Renault.
Albon finished 13th in the second Red Bull after having his initial soft tyre lap deleted for running wide at Turn 11, but he was able set a faster time, albeit one that was 1.724s adrift of Hamilton's time.

Robert Kubica finished P19 on his FP1 outing for Alfa Romeo in place of Kimi Raikkonen after spinning at Turn 1 on an out-lap on hard tyres early in the session.

Pierre Gasly took no part in FP1 as AlphaTauri was forced to carry out an investigation on his engine after spotting an anomaly in its data.