Kubica feels he has "no race pace" since F1 race return 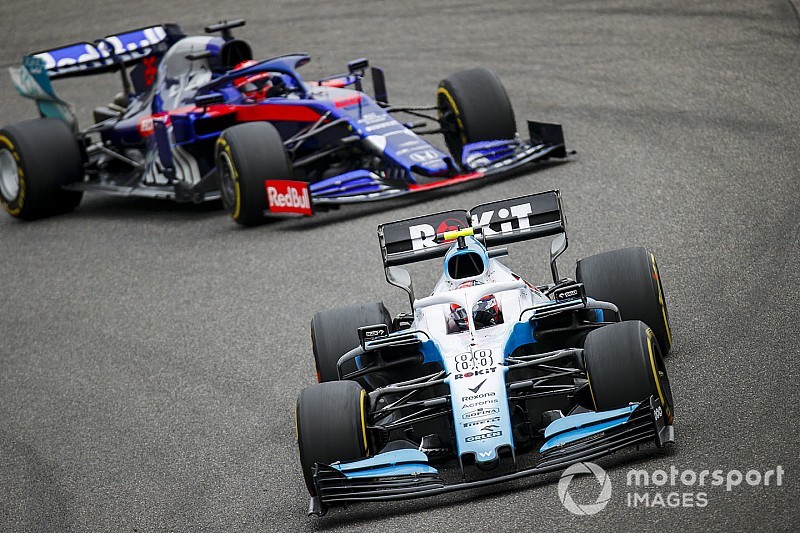 The Pole has finished as last of the runners in each of the three races since his return to the sport, winding up over 16 seconds behind teammate George Russell in the Shanghai event - despite an extra pitstop for the latter.

Kubica feels long-run pace was one of his strongest points during testing last year, and admits he is baffled as to why he is unable to match his teammate on Sunday.

"I think that for whatever reason since I drove the new generation cars I had to work on my single-lap pace, but on the long runs I was always very good, and here since I drove this car - my first long run was in Australia - but the pace is nowhere and the feeling is much worse than I ever had on long runs," said Kubica after finishing 17th in China.

"I have no grip. I think I managed to do something in qualy because the grip delivered by the tyres is much higher, but I cannot do the things that the guys in front are doing, or even George, so it's very strange.

"I really tried everything but when you have no grip, there's no magic in this sport," he added.

Kubica had qualified just 0.031s behind Russell on Saturday, but his average 10 fastest laps in the race were a full second slower than the Briton.

Kubica admits the fact that he felt his race pace was very strong with last year's car makes the current situation harder to accept.

"It looks like whenever the grip is lower, or even with the colder tyre temps when you struggle with the grip, I just cannot drive the car," Kubica said. "And it was definitely not the case last year.

"As I said, probably last year I ended the season saying I definitely had to improve something on single-lap new tyre [pace], but one thing I was not worried at all was the race pace. Actually it was one of my strongest points, but [now] I have no race pace."

He added: "I have no race pace against my teammate. And when you see exiting corners you are wheel-spinning and losing the car and he's pulling away.

"I'm not saying it's the car, but there's something we have to understand. I have very poor traction and actually after the debrief George said the traction was not so bad. As I said, it's not only the car. There are different factors, but that's how it is."

The Polish driver acknowledged his team has been unable to make consistent improvements on how the car handles every time he is on track.

"I think the car is maybe getting slightly better sometimes and slightly worse other times. It's track dependent, conditions dependent and I think we had a better pace compared to others on Friday but you don't know what they are doing.

"Ten years ago in this kind of situation I would try to push more. Probably I would do three or four laps quicker, but then probably I would be on the gravel with worn tyres and my pace would be slower. I really felt like I cannot do anything. I tried many things."

Leclerc: Strategy to hold up Bottas "right thing" for Ferrari