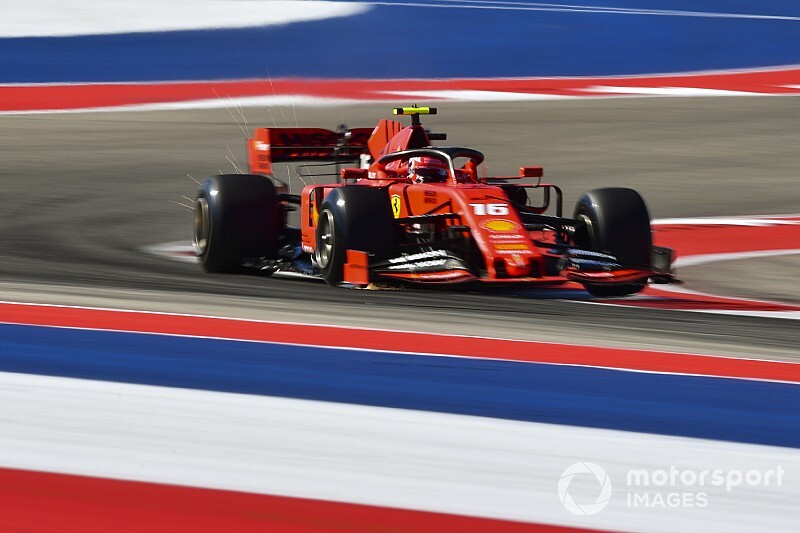 Charles Leclerc suffered a throttle pedal issue on his Ferrari Formula 1 car in opening practice for the United States Grand Prix that was caused by the Austin circuit's bumps.

Leclerc reported a suspected engine problem early in FP1 at the Circuit of the Americas, which Ferrari said it was looking into and then clarified was an issue with the throttle pedal.

Several drivers complained about how bumpy the Austin circuit has become, and teams are now wary of it causing more trouble over the course of the weekend – with Ferrari team principal Mattia Binotto claiming that the bumps were behind Leclerc's setback.

"It's certainly bumpy," said Binotto. "To say right now it would not affect reliability would be very brave. Because maybe later in the race weekend we affirm the opposite.

"As a matter of fact this morning with Charles we had a small inconvenience due to we believe a bump. A small issue. Just as an example.

"So it needs to be managed, we need to be aware of it and making sure it doesn't affect the result."

McLaren driver Carlos Sainz had a big spin through the Esses in the session and his team CEO Zak Brown said it could "create some excitement" in the race.

"I'm not worried about the integrity of the car," he added. "[But] it could catch a driver or two out in the race."

Renault F1 boss Cyril Abiteboul said it was not only a matter of reliability as teams may be able to protect against the worst of the bumps by adapting their set-ups.

"[The challenge is] finding a proper balance between sector one, with the understeer you can create on those bumps that you can fight, to the expense of what you get in sector three, stability and oversteer.

"It will be a compromise. It might be an interesting challenge for all of us."

Williams deputy team principal Claire Williams said stand-in FP1 driver Nicholas Latifi was reporting significant difficulties at the start of the lap, after the engineering team had already identified it as a problem.

Latifi said: "The bumps into Turn 1 were definitely the biggest ones. They were big, but like at a low frequency, so it wasn't like going over rumble strips where you get that kind of vibration effect.

"It was probably the biggest I've ever experienced on a race track. Going into Turn 2 actually, which is quite easy flat out, the first time I tried it flat I hit a bump, got a massive snap.

"Some different lines and stuff to experiment with. But it's still an amazing track to drive."

Williams added: "We've had a lot of race attrition over the past three or four races and we would just like a clean weekend so our poor manufacturing guys don't have to do a whole lot of work after this race going to Brazil."