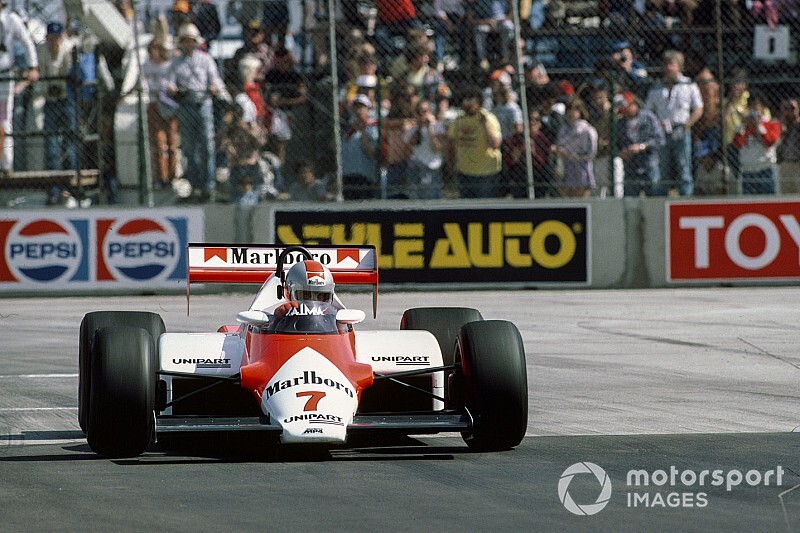 On March 27th 1983 John Watson pulled off one of the most remarkable victories in Formula 1 history, winning the US GP West at Long Beach from a lowly 22nd on the grid.

It was a sunny Californian day not impacted by bad weather, there was no multiple accident to thin out the field, no clever pit stop strategy, and safety car interventions were still a decade away.

So how did he do it? Quite simply it was a stunning performance by a motivated driver who was at the top of his game and had complete confidence in the package underneath him.

In 1983, Watson was in his fifth season with McLaren. The previous year he'd been joined by Niki Lauda, whose return from retirement had captured the headlines. Watson enjoyed a good relationship with the Austrian – they had been team mates at Brabham in 1978 – and while Lauda had the higher PR profile they were equally matched on track through 1982, scoring two wins apiece.

McLaren was one of the teams still using the normally aspirated Cosworth engine, and through 1982 the turbo cars from Ferrari, Renault, Brabham and Alfa Romeo dominated the front rows of the grid.

It was obvious that the class divide was going to be even more apparent in 1983, and with his own TAG Porsche turbo project still in development team boss Ron Dennis left nothing to chance. If McLaren couldn't match the engine performance of its main rivals, the team could at least ensure that its drivers operated more efficiently than their rivals.

"At the start of that year Ron Dennis had said to Niki and to me, 'I'm fed up spending so many millions of dollars to make competitive race cars," Watson recalls. "You two lazy bastards should make the same effort.'

"He said that Niki's physio Willi Dungl would become a full-time team member, and Niki, myself and the team would have to pay a third of the costs each.

"I got my first official Dungl treatment in Brazil, and it was a revelation. He was the architect of the first really scientific approach to the physical, dietary and psychological training of a racing driver. Niki had benefited from it before, and I had seen it, but never actually been a part of it."

Watson was to gain an advantage over Lauda when following the '83 season opener in Rio he unexpectedly found himself with exclusive use of Dungl. 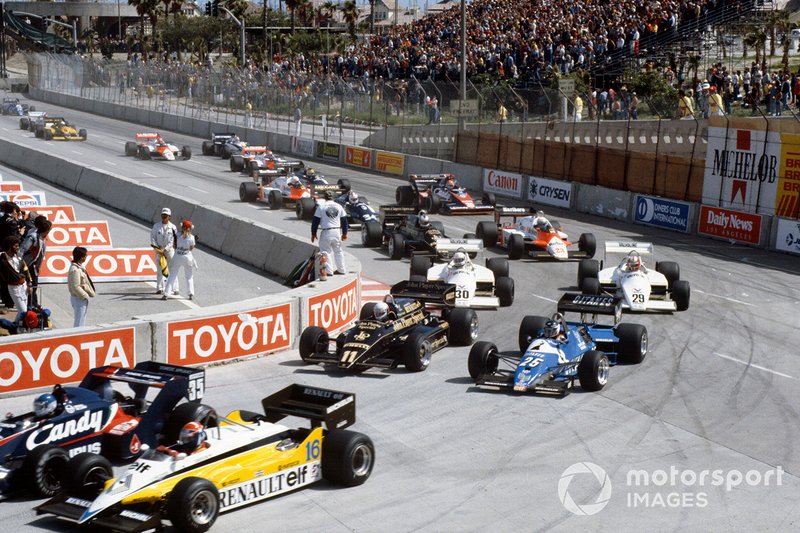 "After the Brazilian GP Niki, Keke Rosberg and myself were due to do a promotional tour of South America for Marlboro.

"But some of the British newspaper boys heard about it, tackled me and said, 'John, are you seriously intending to go to Argentina some nine months after our boys were shot and tortured in the Falklands Islands? This is a great story John, it wouldn't be very good for you...'

"In effect it was a form of blackmail. I thought, 'I don't need this, I'm not going.' I explained that to Marlboro, who were understanding, although it caused some disruption of their plans - they sent Andrea de Cesaris instead.

"So instead of me going on this week-long tour of South America, I flew straight up to California and Long Beach. And there I had the full attention of Willi Dungl for about a week or eight days, before Niki and the rest of the tribe arrived back from South America.

"As that week went on, my physical condition improved. I was never a natural runner, but I began to run better, and all the things that basically equate to fitness were improving, like heart rate and recovery rate.

"Niki eventually arrived back and joined in, but that trip had been an arduous one, and I think he'd picked up hepatitis or something of that nature. It wasn't affecting him immediately, but he wasn't 100%. And I was.

"As the second week continued, my strength increased – not just physical strength, but mental strength – and that's where so much of a driver's performance comes from. I felt I'd grown over that two-week period between Brazil and practice in Long Beach."

There was still a belief that the Cosworth-powered cars could mix it with the turbos on a street track, and indeed the Williams duo of Keke Rosberg and Jacques Laffite qualified third and fourth, and the Tyrrells were also in the top 10. However both teams were using Goodyear tyres, while rivals on Michelins – including McLaren – were left struggling.

"Basically, they were geared more to suit the kind of energy that a Renault turbo car would put through the rear wheels," says Watson.

"In Long Beach, where part of the surface was concrete, we just couldn't get the bloody things to work, because the DFV-powered MP4 was very light on its tyres, especially in qualifying configuration. 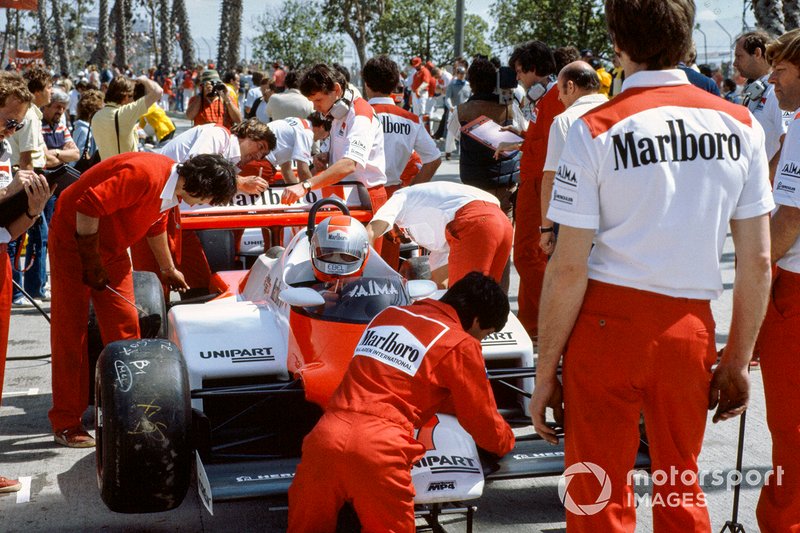 "The inevitable conclusion was that we qualified 22nd and 23rd. It drove Ron and John Barnard almost to distraction – always blame it on the drivers!"

By any stretch this was a disaster for the team, especially at a high-profile US event that was important for sponsors.

The race at least offered some hope, as the turbos couldn't run the sort of power levels they enjoyed in qualifying, and their reliability was always suspect. However, from outside the top 20 even securing a point for sixth place seemed a little ambitious. Then the warm-up session provided some encouragement.

"Then as usual on Sunday morning, with a full fuel load on board, the times were there, and I was flying. You were putting energy into the tyre, which was generating heat. So you could really drive the car, steer it anywhere on the race track.

"There was a particular Michelin, the 05, which was always more consistent for me, whereas Niki always sought to take advantage from something which was marginally quicker, but was not so adaptable to circumstances and conditions.

"So he had potentially slightly more grip than I had, but I had the mental strength plus the knowledge that my good old 05 Michelin would last the race. I could push on it all the way. So that was the tyre – and I come to the point – that I chose..."

Watson went into the race with a positive mindset, helped by his earlier preparations with Dungl. He also knew that he'd won from a similarly frustrating 17th at Detroit the previous year, and that overtaking was possible on a wall-lined city track, if you had the confidence.

"Niki got ahead of me at the start of the race, and basically the pair of us moved up through the field in tandem. Some people dropped out, and some we overtook. I felt extremely strong, and at no point was I going to let Niki get away.

"I felt I was better street fighter than Niki was, borne out to some extent by my win in Detroit a year earlier. He was driving his balls off, but I shadowed his every move, and every time he made an overtaking manoeuvre I pushed my way through as well, to prevent him getting away.

"It wasn't that I was racing him any more than anyone else, but when you're behind another car, if you lose momentum, you then stall out."

Both men worked their way up the field, helped by some attrition ahead, notably when Keke Rosberg and Patrick Tambay tangled while battling for the lead.

"At some point we were running third or fourth or something, and I'd decided that there was no way he was going to beat me. Eventually I slid past; I'd come from quite a long way behind to do it. Niki was also aware that once I was on an overtaking manoeuvre I was on my way, and there was nothing stopping me! 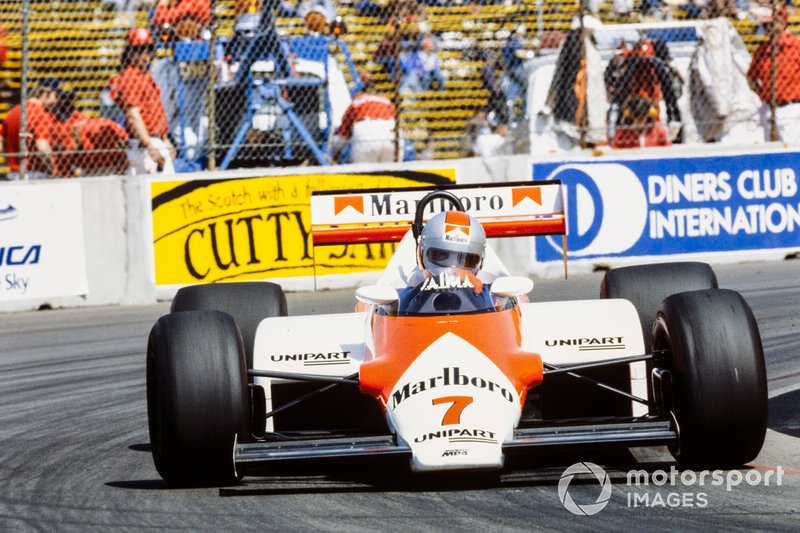 "Then once I was past him, I was gone. Mentally, he'd been beaten. Once he was overtaken he didn't come back, he almost acknowledged that that was going to be the result - which was another aspect of Niki's pragmatic mind.

"And then I took Jacques Laffite for the lead. He tried to narrow the angle into the corner, but with the same kind of confidence I'd shown in Detroit, I did a really positive, well-executed overtaking move. I think overtaking is as much in the head as anywhere else. So I won the race, with Niki second."

In fact, Watson led his teammate home by 27.9 seconds – and the Ferrari of third-placed Rene Arnoux was almost a lap behind.

"It was a big shock. John and Ron, plus John Hogan and Paddy McNally of Marlboro, looked like they'd been caught with their trousers round their ankles or something!

"It took some time to react to the reality that we'd won the race from this lowly grid position. But Willi had seen the potential, the power he was generating in me. He didn't tell me before the race, but he said afterwards that he knew I was going to win. He could see what was happening to me - there was this svengali-like operation going on."

The joy of victory was later to be tempered by some in internal politics at McLaren, and Watson would be subject to a dressing down when he returned to the UK.

"In the press conference I remember being asked, 'What tyre do you use?'. And I said, 'I chose the 05.' Which was a naive answer...

"When I got back to England a few days later, there were thunderclouds over the McLaren HQ. I walked in and Ron said, 'John [Barnard] is very, very upset.' Motoring News was put down in front of me – the headline was about me choosing the tyre.

"There were two points, one that I'd implied it was my choice, and secondly that I had exposed something that was in-team knowledge. So there were two lessons to be learned, and I had no problem with that. You're never too old to learn.

"But it was just amazing the way this had manifested itself at the end of a dream weekend for the team – a one-two, when they were looking at falling on swords...

"I said, 'Look John, I apologise, I shouldn't have done it,' blah, blah, because that was the easiest way to resolve the situation. It was a lesson for me to in future, in those circumstances, never answer direct questions..." 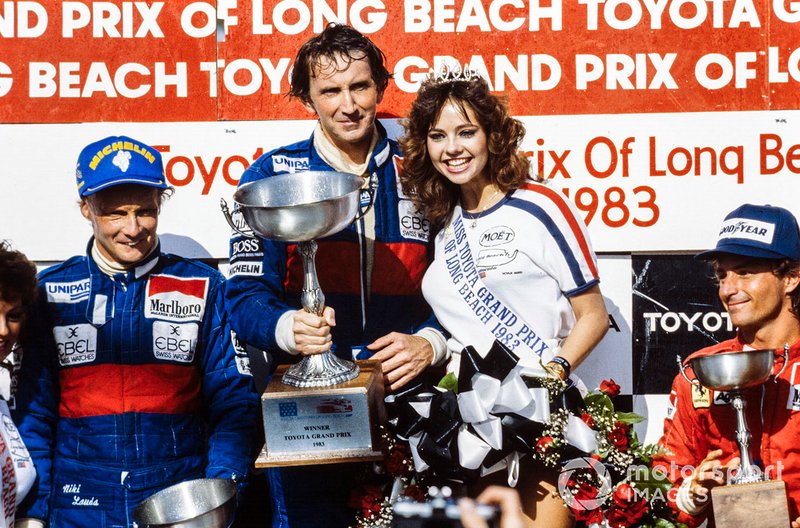