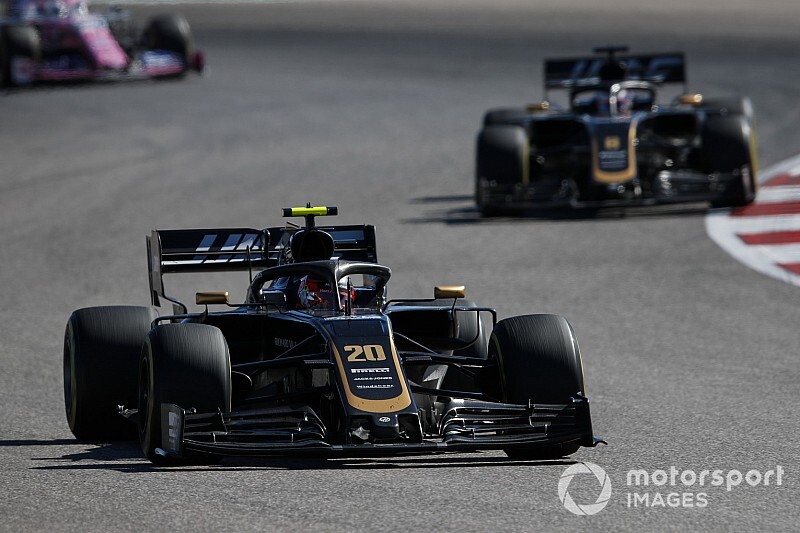 Kevin Magnussen's late-race retirement in the United States Grand Prix was caused by an "exploded" brake disc on his Haas Formula 1 car.

The Dane slid into the gravel on the penultimate lap of the race at the Circuit of the Americas after suffering a brake failure at the end of the back straight.

As his car came to a rest in the gravel Magnussen radioed his team to say "yep, told ya", having been told to adjust his brake balance seconds before the failure.

"I had a long pedal the whole race and I was asking them to have a look but they couldn't see anything and the temperatures were alright so I just yeah continued, and then the disc exploded," said Magnussen.

"The disc exploded, so no brake disc!"

Magnussen was only running 16th at the time of the failure, despite moving up to 10th on the opening lap and briefly holding ninth when Sebastian Vettel retired.

"I even overtook a Red Bull which was good," he laughed. "I just was massively out of position, then fell back."

Magnussen had slipped out of the points by lap nine, as Haas's race-pace problems continued.

The team has tried different aerodynamic packages in its bid to understand its car's problem but has been unable to rectify its form this year.

Magnussen scored Haas's only points since the summer break in Russia and has fallen to 16th in the drivers' championship, one place ahead of teammate Romain Grosjean.

"I kind of knew after a few laps that this isn't going to last," said Magnussen of his early top-10 run.

"You really need to manage the tyres and for it to kind of settle, and I can't do that, they will overtake me anyway.

"It's hopeless. Not in terms of our situation, but it's a hopeless job to try and hang on to my position."