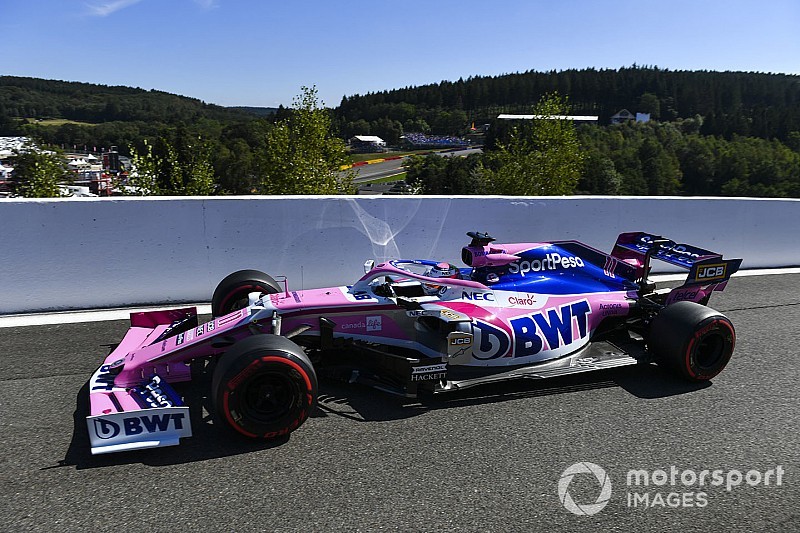 Racing Point's Sergio Perez has been forced to switch to an older-spec Mercedes engine after he suffered a failure of his new-spec unit in second practice for the Belgian Grand Prix.

The failure will be a cause for concern for Mercedes, as all six drivers from the works team, Racing Point and Williams took the new upgraded spec on Friday morning, comprising a V6, turbo and MGU-H.

The HPP factory in Brixworth will investigate the cause of Perez's issue overnight.

Perez still had mileage on his last old-spec engine, which was set to be used up over future race weekends.

That means he can go back to it and thus won't take a grid penalty at Spa.

However, the Mexican now looks set to take a penalty at Monza next week if as expected he takes a new example of the latest spec, which will be his fourth power unit of the year.

Perez was an encouraging fifth in FP2 when he stopped on track in the closing minutes of the session after suffering an apparent loss of oil pressure. Flames were seen around the rear of the car as he climbed out.

"I just got off the power and I saw a little bit of smoke and noise coming out of the exhaust, so not looking good," he said.

Despite the frustration with the engine issue, Perez was encouraged by the performance of the car, which is running a new front wing and other updates.

"I think it's helping the balance," he said when asked by Motorsport.com about the wing. "But I still think there is a lot of work to do.

"I think we are getting there, step by step. It's looking promising for the weekend and we can be strong tomorrow when everyone puts it together.

"I think we are doing good progress, I think historically this is a good circuit for us so I'm not surprised we are competitive. I found a very strong rhythm today and things are looking very solid."

Perez's teammate Lance Stroll reported a burning sensation in his back during FP2, which was related to excessive heat from electrical boxes behind his seat, and not connected to Perez's problem.

Red Bull not ruling out external driver for 2020 line-up