Bottas had only qualified sixth after a spin on his first Q3 run in Montreal, while Ricciardo secured the best grid spot of his Renault career so far in fourth.

The Mercedes arrived on the fifth placed Renault's tail soon after Bottas made his pitstop, but spent six laps stuck behind it - during which title contender Bottas repeatedly got alongside Ricciardo but could could not complete passes.

Even once Bottas managed to get through, Ricciardo mounted retaliation attempts before having to let the Mercedes go.

"Probably the most positive thing was holding off Bottas for so long and just being in that fight with a Mercedes for a few laps. That was cool," said Ricciardo when asked for his verdict on the race by Motorsport.com.

"I would've have loved to have done it with Max as well but he was coming with too much pace at the end with that tyre. He got me very easily."

Ricciardo admitted he had initially intended not to fight Bottas too hard.

"When he came up behind me I thought he was going to get me easily," said Ricciardo. "I was going to try to defend for one lap but if he got me I wasn't really going to fight to the edge.

"But I kind of held him off for one lap and then saw in my mirrors 'maybe he'll start to hurt his tyres' a bit. So from that point I was like 'let's have some fun'. I think I hurt my tyres a bit doing it but it was worth it. I didn't think I'd hold him off for that many laps.

"By that point you could tell he was getting a bit agitated and I was just enjoying it, enjoying making life difficult."

Bottas described the Ricciardo dice as "on the limit" of what is allowed in the rules, but emphasised that he was not complaining and had enjoyed it.

"It was actually a really good fight with Daniel," said Bottas, who finished fourth.

"Sometimes it was on the limit of the regulations with his defending, because he was waiting for me to make the move and then he kind of blocked me afterwards in pretty high speeds.

"But I wasn't complaining because I like hard racing. Some good defending by him. He definitely didn't make it easy for me to get by, but it was all OK."

"What showed was that even when he had DRS we still had pretty good straightline speed," he said. "I feel there we've bridged the gap a lot. There's still a lot of work to do but it's looking good."

He admitted that he had also hoped to jump second row partner Charles Leclerc at the start and have an early battle with a Ferrari.

"But as soon as I dropped the clutch I could feel that I generated wheelspin and I actually thought I was going to get passed," Ricciardo added.

"I guess the cars behind didn't make a great start either. I just managed to hold position in fourth. In my head I was envisaging passing Leclerc." 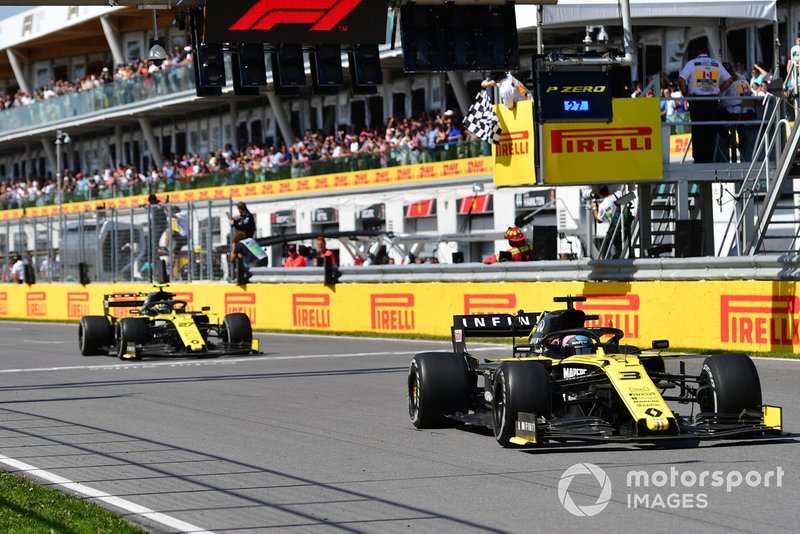