At Sauber Petronas a fresh breeze, in the literal sense of the word, will be blowing in the 2004 season. The Swiss team today presented the new, ultra-modern wind tunnel at the Hinwil headquarters to international media ...

At Sauber Petronas a fresh breeze, in the literal sense of the word, will be blowing in the 2004 season. The Swiss team today presented the new, ultra-modern wind tunnel at the Hinwil headquarters to international media representatives. 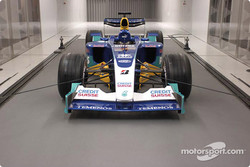 The Sauber wind tunnel is large enough for a full-size Formula One car.
Photo by Sauber Petronas.
"Aerodynamics is the primary factor affecting a modern Formula 1 car. Consequently, the wind tunnel is the primary tool for creating a successful racing car," said Team Principal Peter Sauber, explaining his decision to build this complex facility. Sauber have invested roughly 70 million Swiss francs (US$ 55m) in this project, marking the largest ever in the company's history. The team is now at the point of systematically expanding the level of work performed in the wind tunnel. "With the top teams having made enormous progress particularly in this area in recent years, we have a lot to catch up on," Sauber added.

Sauber's plans for building a wind tunnel date back to the year 1999. Construction started on 14 January 2002, and the technical equipment of the facility was completed last Friday. Following completion of the calibration phase in February, the aerodynamics of the new Sauber Petronas C23 can be improved for the first European races already.

The Sauber wind tunnel features the most advanced technology currently available. Regarding factors such as wind speeds, the size of the test section and the models, the dimensions of the "Rolling Road", and the "Model Motion System" as well as data acquisition technology, the Sauber facility will compare favourably with the existing Formula 1 wind tunnels.

The wind tunnel is of a closed-circuit design. The total length of the steel tube is 141 metres. A fan with a maximum power consumption of 3000 kW enables wind speeds of up to 300 kph to be reached. The same velocity is achieved by the steel belt of the so-called Rolling Road, simulating the relative motion between the car and the road. In order to simulate cornering or side-slip conditions up to a maximum angle of ten degrees, the entire rolling road platform can be rotated. Load cells underneath the steel belt enable constant measuring of wheel lift.

With a 15-square-metre cross-section and a particularly long Rolling Road, the test section is unusually large, allowing even road cars up to the size of vans to be measured. In most cases, Sauber's engineers will be working with 60% scale models, however, certain measurements will be made on full-size Formula 1 cars, as well. As an absolute novelty, the test section includes the possibility of performing tandem tests of 60% scale models to simulate air turbulences and slipstream conditions.

The overall concept of the Sauber facility is based on a completely novel approach. It combines the purposes of an industrial building with a hospitality section, which can be used by Sauber's partners and sponsors for exclusive special events. With a total length of 65 metres and a width of 50 metres, the building boasts impressive dimensions as well as appealing aesthetics, emphasised by the glass fa?ade.

Although presenting the exterior impression of a homogenous hall, the facility actually comprises two clearly separated elements. These are the wind tunnel hall itself and a multi-storey wing that accommodates work areas, a plattform for special events and the Sauber museum. The two sections are separated by a glass wall that visually preserves the relation between them, while effectively keeping out the noise emanating from the wind tunnel.

"The new wind tunnel, in terms of its overall concept, is truly unique. It visibly documents our prime objective of continually improving the competitiveness of our team and of ensuring that Hinwil remains an attractive location over the long run," Peter Sauber said in his closing comments.

Sauber under no illusions about constructors' position