Toyota: Another one bites the dust

Today the world's No. 1 automaker, Toyota Motor Corporation (TMC), announced its immediate withdrawal from Formula One. The decision once again caught Formula One by surprise, as the team had signed the 2009 Concorde Agreement, an agreement between ...

Today the world's No. 1 automaker, Toyota Motor Corporation (TMC), announced its immediate withdrawal from Formula One. The decision once again caught Formula One by surprise, as the team had signed the 2009 Concorde Agreement, an agreement between FIA, FOTA, FOM and capital investor CVC about the future of the sport, and it was therefore widely assumed that the Toyota team was fully committed to Formula One until the end of 2012. 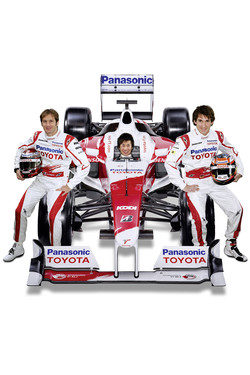 The Toyota team at the start of the 2009 season.
Photo by Toyota Motorsport GmbH.

But the TMC board of directors decided otherwise, and at a press conference on Wednesday morning in Tokyo, company president Akio Toyoda told the press the TMC would withdraw from Formula One because they "needed to cut the costs and needed to focus on its core business", and added that this was "a very painful decision for the company. I apologize to our fans from the bottom of my heart. I made the decision myself."

Earlier in May this year, the company reported a record loss of $4.4 billion, while in the same period the year before, the company made a historic record profit. Like other car manufacturers Toyota had to cut production when car sales dramatically declined as a result of the economic crisis. At the start of the 2008 and 2009 Formula One seasons, Toyota F1 boss John Howett admitted that they were under pressure and very desperately needed to score good results, to convince the board of directors they should stay in Formula One.

But Toyota claims it was a decision based upon the current economic climate, and had nothing to do with the poor results of its Formula One team this year or last year. Toyota officials also admitted the withdrawal from Formula One was permanent, and claimed that even when the economic climate would improve, a return to the sport would be very unlikely.

The complete withdrawal also means Toyota will no longer supply engines to Formula One teams, and Williams team principal Sir Frank Williams probably knew -- or at least suspected -- what was about to happen, when he on Monday announced his team would be using the Cosworth engines in 2010. In the past Toyota supplied engines for Williams, Jordan, and when Eddie Jordan sold his team, to the Midland F1 team.

Despite an estimated budget of $300 million per year, Toyota failed to win any of the 139 races it entered since they joined Formula One in 2002. They managed to secure a few podium positions, but this season, although they made a very promising start, they ended in sixth place in the Constructors' Championship with 59.5 championship points. 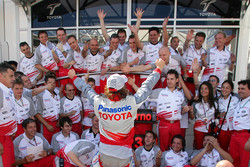 During their debut season in 2002 they scored 2 points, with drivers Alan McNish and Mika Salo, in 2003 they scored 16 points with 2002 American Champ Car champion Cristiano da Matta and Frenchman Olivier Panis. The 2004 season ended on an all time low for Toyota, the team only scored 9 points in the championship, and both cars were disqualified from the Canadian Grand Prix for running illegal parts during the race. In that same year Toyota was also accused of industrial espionage when stolen data from the Ferrari team emerged at the Toyota facility in Germany.

Their best season was 2005 when Italian driver Jarno Trulli scored a second place during the races in Malaysia and Bahrain and a third place in Spain, while team mate German Ralf Schumacher scored a third place in Hungary and China, and also scored the first pole position for the team during the Japanese Grand Prix. That year Toyota took fourth place in the championship with 88 points.

In 2006 they scored 35 points with the same driver line-up, and ended the 2007 season with 13 points in the bag. In 2008 Timo Glock replaced Ralf Schumacher, and Toyota managed to score 56 points which earned them the fifth place in the Constructors Championship.

Formula One has already been hit hard by the economic crisis, many sponsors, and especially banks, insurance companies and capital investors, have already turned their back to the sport. Last year the Royal Bank of Scotland, Williams' title sponsor, and this year Dutch ING bank, Renault's title sponsor, announced they would withdraw from Formula One. The number of spectators who attend a Formula One venue have also been decreasing, in Turkey and China the empty grandstands were testimony to the fact that the Formula One fans also suffer from the economic downfall of the last two years. 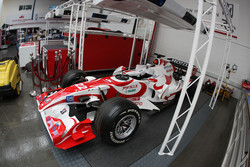 In 2008 the Super Aguri team, founded in 2006 by ex-Formula One driver Aguri Suzuki, was the first victim, having run into financial problems, and although they were backed by the Honda Company and the Honda Formula One team, they had to close the garage doors permanently after Aguri Suzuki failed to secure more sponsor monies to save his lifetime ambition, the Super Aguri team.

At the end of 2008, the Honda company decided to pull the plug on their Formula One team. Like Toyota, Honda reported enormous financial losses as a result of a world-wide decline in car sales, and really had no other option than to withdraw from Formula One. Although Ross Brawn managed to make a deal with Honda and revived the team just in time before the start of the 2009 season, and even won both championships with his Brawn-Mercedes team, the trend is clearly visible, the economic crisis has had an enormous impact on Formula One.

And to add to the misery, a few weeks ago the Bavarian BMW car manufacturer also decided to end their Formula One activities, also because of the afore mentioned reasons. Again Formula One was shocked by the decision of the BMW company. Ex-team principal Peter Sauber and capitol investor Qadbak have now taken over the team, but have sofar the new Sauber-Qadbak team failed to secure a slot on the 20210 grid.

Last Monday, Japanese tyre manufacturer Bridgestone also decided to end their Formula One activities after the 2010 season, that hasn't even started yet. And today Toyota leaves Formula One, which brings us to the next question: Who's next? Renault? Toro Rosso?

All eyes are now on the Renault Formula One team, like Toyota they have signed the 2009 Concorde Agreement, but as the events of today proved, it doesn't mean a thing and is surely is not a guarantee Renault is still committed to Formula One until the end of 2012. Renault had a miserable 2009 season to say the least, as a result of the Crash-gate scandal, they lost their team principal Flavio Briatore, top-notch designer Pat Symonds and driver Nelson Piquet, and may sponsors. Star-driver and double World Champion Fernando has left the team to try his luck at the Italian Ferrari team.

Although Renault secured the services of Polish driver Robert Kubica for 2010, and against all odds has signed a major sponsorship deal with Dutch watch maker TW Steel for 2010, they could be the next team to leave Formula One. Perhaps not this year or next year, but the losses the Renault mother company reported this year, could very well be a reason for the Renault board of directors to stop their Formula One activities, especially if the economic crisis continues beyond 2010.

But the situation Formula One is now facing, is not completely out of our hands. If the FIA (Federation Internationale de l'Automobile), led by freshly elected president Jean Todt, and the FOTA (Formula One Teams Association) could agree on a for all teams acceptable Resources Restriction Agreement (the new name for the old Max Mosley cost cap regulations) the battle against the economic recession could be decided in favour of Formula One. And if Bernie Ecclestone, and his FOM (Formula One Management) organization and its partner capital investor CVC would give circuits a bit more financial room to make a modest profit when they host a Formula One Grand Prix, the situation might not be entirely hopeless.