21-year-old Italian Mirko Bortolotti has confirmed his participation in the 2011 FIA Formula Two Championship, rejoining the series after a year spent competing in GP3.

Every season is always important and I always push 100%, but my goal this year is to win and I will do my best to achieve that.

Bortolotti, who has tested for both the Scuderia Ferrari and Toro Rosso Formula One outfits, competed in Formula Two's inaugural season in 2009. He enjoyed great success, scoring a maiden victory at Brno and collecting four podiums to remain in contention for second in the championship until the final race of the season. He was rewarded with a call up to test for the Toro Rosso F1 squad during official F1 rookie testing at the end of the year.

Such performances added to Mirko's reputation as one of the world's best young drivers -- a status he first gained when he dominated the 2008 Formula 3 Italia Championship, taking nine wins and finishing outside the podium only once in 16 races. He went on to test for the Ferrari F1 team as his championship prize, unofficially breaking Kimi Raikkonen's lap record at their Fiorano test track.

Ferrari then signed Mirko to their Driver Academy and placed him in GP3 for 2010, where he again met with success as he took five top eight finishes and one podium at Monza. He also finished as Addax's outstanding driver, collecting almost double the points of his nearest team-mate.

Bortolotti, who follows Spain's Miki Monras in graduating from GP3 to F2, insists the FIA Formula Two Championship is his only goal in 2011 -- particularly given his impressive showing in the series two years ago. 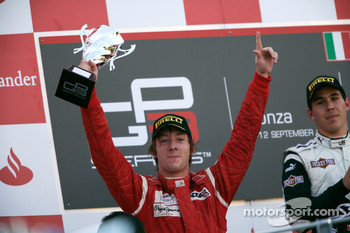 Mirko Bortolotti on the podium

"I did F2 already and I was able to show very good potential, so I'm very happy to be back and I have to thank everybody who has helped me," Bortolotti said. "Every season is always important and I always push 100%, but my goal this year is to win and I will do my best to achieve that.

"It won't be easy, it's going to be a fight, but I always believe in my own ability and we will see the results at the end of the season. 2009 was a very important year for me in F2, and I know how the championship works and how professional it is, which will help this year. I also know how hard the engineers and mechanics work in F2, and hopefully I can pay them back with results in 2011!

"I'm quite relaxed and for sure a lot more experienced now than in 2009. I had some troubles in GP3 at the start as we weren't ready with the car, but I kept cool, worked hard to improve the situation and our results got better and better. I scored almost double the points of my team-mates and importantly I learned and developed as a driver, so I'm feeling confident.

"I also have to say I was very happy to drive for Ferrari, it was a great thing to be part of their team and I learned so much by working with some of the best engineers in motorsport. The point is to take everything I learned and put it together this season. It won't be easy to beat everyone else, but the Williams F1 test prize is a great incentive and I'm aiming for the top!"

Jonathan Palmer, Formula Two Chief Executive, said: "I am really delighted to welcome Mirko back to F2. He is a big talent and was one of the F2 stars when he was part of the Red Bull team in 2009, winning at Brno and scoring another four podiums. With a year of GP3 experience to add, Mirko will clearly be very strong this season and will undoubtedly be one of the favourites for the 2011 FIA Formula Two Championship -- and the Williams F1 test."