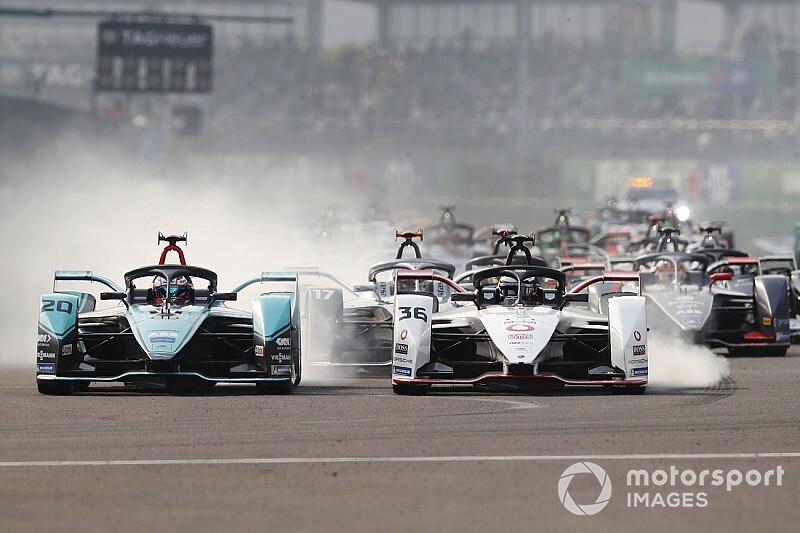 Jaguar's Mitch Evans won an incident-packed Mexico City E-Prix, the fourth round of the 2019/20 Formula E season, at the Autodromo Hermanos Rodriguez circuit on Saturday.

Evans crossed the 4.271 seconds clear of Antonio Felix da Costa to bag his second series win, but had been a massive 7s to the good with a handful of laps to run.

He and poleman Andre Lotterer, who had scored Porsche's first-ever FE pole, made similarly subdued starts and that allowed the Mercedes of Nyck de Vries to threaten on the approach to Turn 1. Evans, on the inside line, dived alongside Lotterer under braking and locked up. The pair made contact as Lotterer tried to defend the postion and that pushed him out on to the grass and down to fifth.

From there Evans led the remainder of the race and never faced a genuine challenge to his lead, including managing a safety car restart.

De Vries aborted any possible move into Turn 3 as the rear of his car snapped sideways, and that allowed the Nissan of Sebastien Buemi through to second two corners later. With de Vries further delayed as he struggled early on, Lotterer was able to partially recover to third before the race was paused by a safety car.

The Dragon of Nico Muller was battling for a top five spot, and that prompted him to brake too late on the run to Turn 1. Muller attempted to make the corner but carried too much speed and ploughed into the barrier in the middle of the circuit.

With Evans safe at the restart, Bird made a robust move on Lotterer into the stadium section for third place. That put Robin Frijns on course to pass also, and Lotterer's attempts to defend were insufficient with de Vries going by also.

As Lotterer continued to drop he then whacked the wall on the exit of Turn 3 to cause a front-right wing failure. That then dropped the bodywork on to the tyre as he rounded the final corner to leave a plume of smoke down the main straight as the corner of the car then caught fire.

With Lotterer out the equation, the DS Techeetahs once again fell foul of team orders in their battle to close on Buemi for third. Antonio Felix da Costa and Jean-Eric Vergne were twice instructed to swap positions and that gave Buemi breathing space.

But as da Costa finally broke free with more useable energy, he slashed the margin and made a move round of the outside of Buemi at Turn 9 before setting off after Bird.

A lap later, Bird activated one of three attack modes – up from the usual two – and was delayed as he ran off line. That brought da Costa side-by-side round the outside of the final corner, with Bird narrowly holding on.

But under the pressure Bird ran too deep into Turn 3 and nosed into the wall. He managed to rejoin but then crashed in the stadium section. That gave da Costa second place, ahead of Buemi and Vergne.

Alexander Sims mounted a massive comeback from 18th on the grid in a race of attrition. He now sits only one point adrift of new championship leader Evans.

Lucas di Grassi lost out to the BMW driver late on but secured sixth from Oliver Rowland and Edoardo Mortara. After qualifying 17th, Evans's team-mate Calado moved to ninth with Pascal Wehrlein rounding out the top 10.

That was despite serving a drivethrough penalty on the opening lap owing to both Mahindra cars exceeding the two-gerbox limit for the season. His team-mate D’Ambrosio, who had to serve a different stop/go penalty for qualifying outside the top four, was 11th.

Robin Frijns dropped from sixth to 12th after an issue activating attack mode.

Evans now leads the championship, after erstwhile leader Stoffel Vandoorne suffered a late impact with the wall and failed to score.