Alex Bowman beat Corey LaJoie and Ryan Preece to the line in a three-wide photo finish at virtual Talladega Superspeedway. 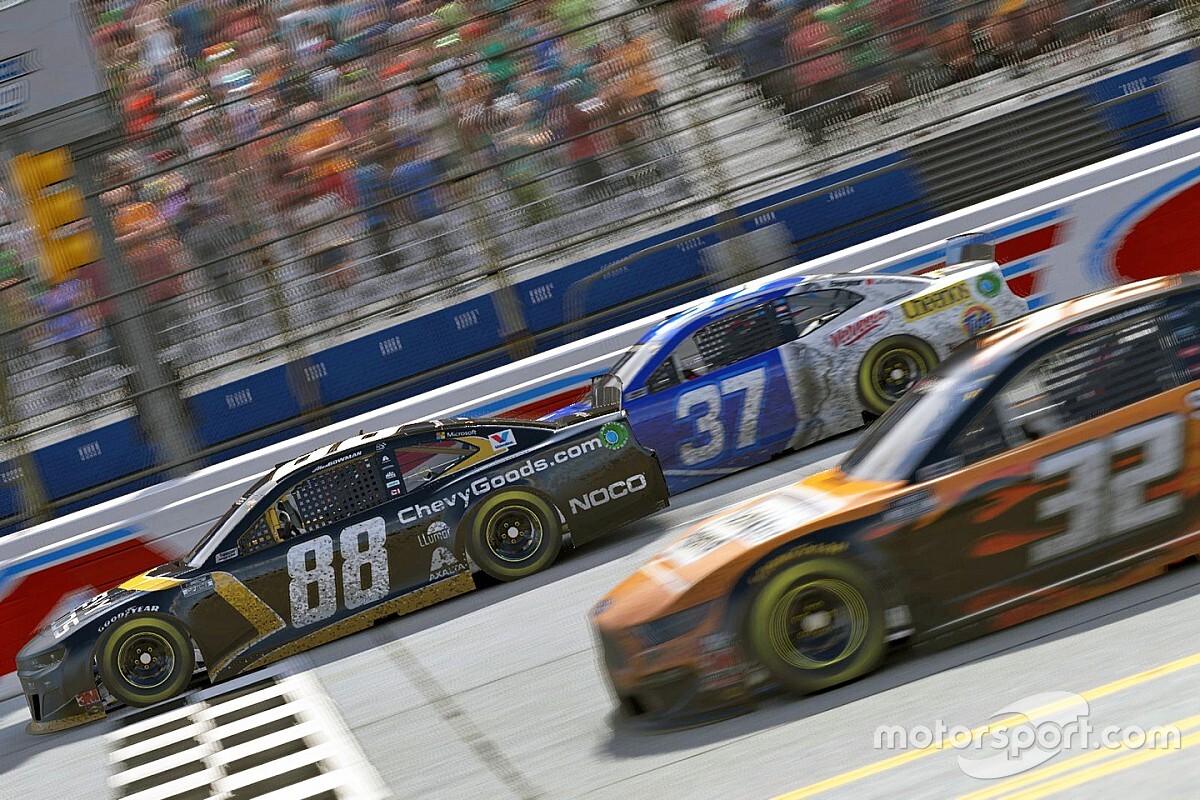 The 70-lapper at virtual Talladega Superspeedway got underway with Corey LaJoie leading the field to the green flag.

He led the way until Ty Dillon took a turn out front eight laps into the race with a push from brother Austin.

15 laps into the event, the Big One struck. Ricky Stenhouse Jr. was challenging Brad Keselowski for the race lead from the high side and got hooked into the outside wall by Dillon.

Jeff Gordon was one of at least a dozen cars taken out in the incident and was sent airborne, getting stuck in the catch-fencing and was forced to tow.

All drivers were allotted one quick repair and many used it during the ensuing caution period.

Brennan Poole led on the restart with Keselowski quickly moving into the race lead on Lap 21. A few laps later, both drivers were sent sideways and into the grass on the frontstretch, but both recovered and continued on.

William Byron moved into the race lead and although there were a couple incidents back in the pack, the race stayed green.

Clint Bowyer took the lead as green-flag pit stops neared, but soon overheated his engine while pushing the lapped car of Alex Bowman, blowing up.

The leaders started filing down pit road with just over 20 laps to go. Denny Hamlin was removed from the server after an equipment failure caused him to crash.

The caution flag returned with 14 laps to go when Gordon crashed out of Turn 2 after Elliott got turned off the nose of Poole, collecting the No. 24.

During the caution, Aric Almirola got into the wall and collected Bowyer.

The lead changed hands several times with Bowman taking control in the final five laps. Earnhardt Jr. got sent up the track and out of contention after a bad bump.

Soon after, Joey Logano went spinning and collected several cars as he challenged for the race lead entering Turn 1.

The race turned into a two-lap overtime shootout with Bowman leading the inside and LaJoie behind. Ty Dillon led the outside with Preece behind him.

Bowman moved up the top and led the white flag with Preece behind as Dillon tried to maintain control from the inside. Coming to the finish, LaJoie got to the inside of Dillon and he blocked, sending the No. 13 spinning through the field.

Preece went to the outside of Bowman and it turned into a drag-race to the stripe with Bowman taking the checkered flag just ahead of LaJoie and Preece.

Smithley and Cassill rounded out the top-five followed by Byron, Poole, Kyle Busch, Kurt Busch and Daniel Suarez in the top-ten.

"I guess it's right place, right time," Bowman said. "I'm surprised that we won an iRace. It's pretty wild to be with how good those guys are. If it was going to happen somewhere, Talladega's where you can make it happen, definitely more guys that take it more seriously than I do."
Asked about his fuel situation at the end of the race, which he tweeted about before the final restart, Bowman said, "It was close, but glad we were able to make it. We were in a situation where you can't really trust the fuel gauge. I started saving with 3/4-quarter throttle. Glad the caution came out when it did."