Colton Herta put Andretti Autosport-Honda top in opening practice for the IndyCar season finale, but Team Penske Chevrolet’s Scott McLaughlin was only half a second slower in his first official session in the series. 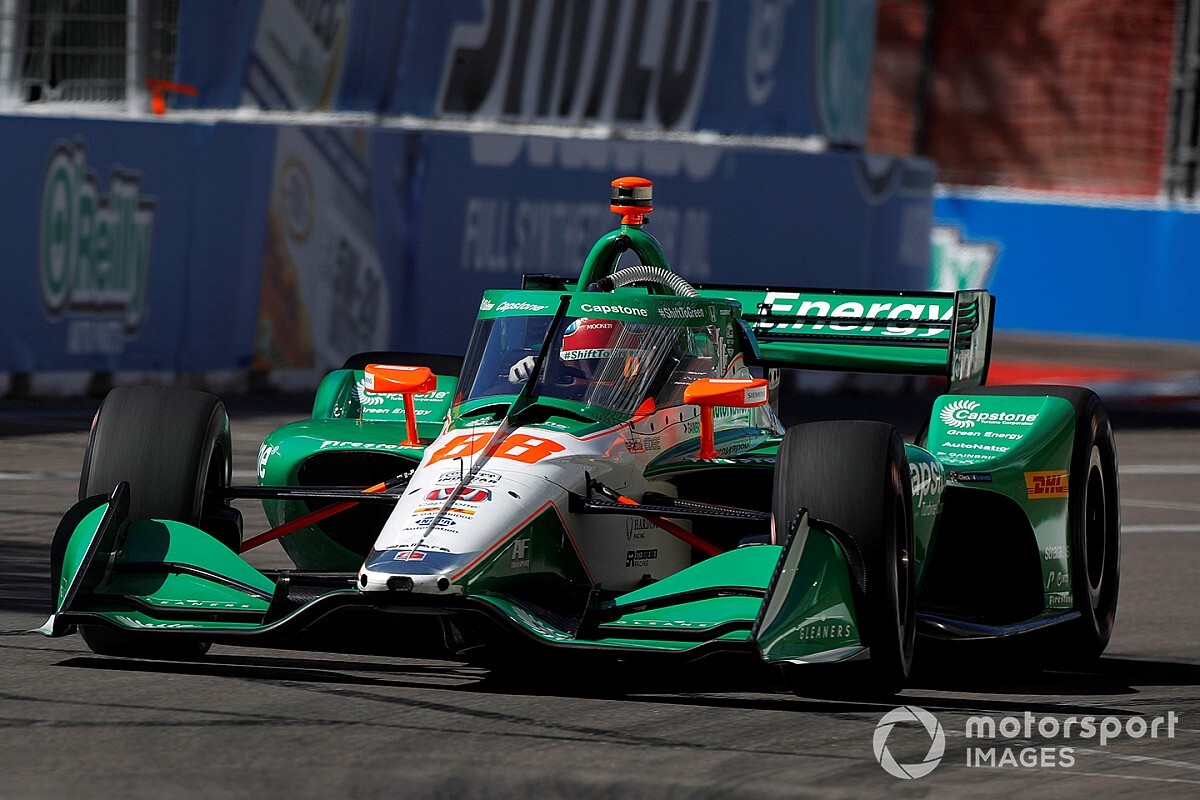 Chip Ganassi Racing’s Felix Rosenqvist was the first driver to duck into the 61sec bracket, turning a 1min01.8248sec lap of the 1.8-mile street and runway course, an average speed of 104.812mph.

Then with 25mins remaining, eight-time St. Pete polesitter Will Power of Team Penske-Chevrolet joined him in that bracket and next time by eclipsed him with a 61.6276.

After outbraking himself at Turn 3, Bourdais channeled his frustration into brilliance and sprung to P2. Then Marcus Ericsson of Ganassi headed into the Top 3.

But the next star of the show was Scott McLaughlin, in his IndyCar debut, strapping on fresh primaries and all-but matching teammate Power’s P1 time.

The three-time Supercars champion – confirmed yesterday as an IndyCar full-timer in 2021 – made a couple of errors on his first flyer on alternates but appeared to be getting it right on his third until running into Turn 10 runoff.

However, the session had already been red-flagged with five minutes to go, as Rosenqvist spun and stalled heading into the final turn.

Meanwhile, James Hinchcliffe and then Andretti Autosport teammate Herta had moved the benchmark to 61.2279 and 61.1306sec respectively.

The session restarted with just 2m30sec remaining, but then Oliver Askew – returning to the #7 Arrow McLaren SP-Chevrolet after a one-event absence – skated straight on at the final turn and nosed into the tire barrier, while McLaughlin made a similar error without contact, and so the session ended under red.

Palou grabbed third ahead of Sato and Bourdais, while Alexander Rossi was sixth but needed his toe-link replaced after tagging a wall.

Other drivers made wall contact, including Ganassi's championship leader Scott Dixon ,who reported that the Firestone alternate tires go through a lull before offering their ultimate grip. He finished the session in 16th, just behind his teammates, but said the car was plenty fast enough and that his best lap had been ruined by a red flag.

The only man who can prevent Dixon taking the title, Team Penske’s Josef Newgarden, finished the session in eighth, just ahead of Power and McLaughlin, and just behind Ed Carpenter Racing’s Rinus VeeKay, who will claim IndyCar Rookie of the Year honors when he starts the Grand Prix of St. Petersburg tomorrow.

Qualifying begins at 3.05pm local (Eastern) time and reverts back to the normal IndyCar method of knockout qualifying. With one second covering the top 21 cars, it promises to be very tight.