Andretti Autosport's Oliver Askew won the third race of the Indy Lights season in emphatic fashion, but all the talk afterwards was of the amazing scrap for second around the 3.41-mile Circuit of The Americas. 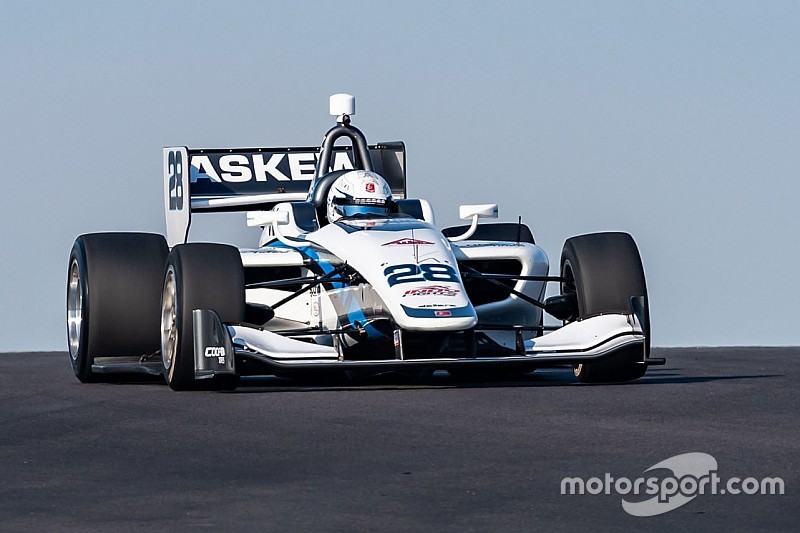 Ryan Norman, set to start second alongside polesitter and Andretti Autosport teammate Askew, spun on the warm-up lap, leaving Askew unchallenged into Turn 1, and giving BN Racing/Team Pelfrey’s Toby Sowery a clean run up the inside of the third AA car of Robert Megennis to grab second place.

At Turn 1, Zachary Claman de Melo went onto the pitlane exit to make it four-wide, braked too late and slid into his Belardi Auto Racing teammate Lucas Kohl, spinning him around and leaving De Melo with a holed nosecone.

Behind Askew, Sowery and Megennis, Juncos Racing’s ace Rinus VeeKay was initially involved in a titanic scrap with BN Racing’s David Malukas, while Norman – chased by another Belardi car, that of Julien Falchero – stacked up behind them. But on Lap 3 at Turn 15, the scrap went wrong for Malukas: he tried to dive down the inside of VeeKay, realized he wasn’t going to make it and as he backed off he allowed Ryan Norman alongside. The BN car understeered wide and struck Norman, leaving him with a broken right front suspension and broken front wing, while Norman escaped relatively unscathed.

Further back, a recovering De Melo became the victim when Kellett inexplicably turned in on him, although it was the Juncos driver who suffered a front left-front puncture and had to pit.

Meanwhile back at the sensible end of the field, on Lap 6 Megennis drafted Sowery down the back straight and hit the push-to-pass to get around the BN/Pelfrey machine as the pair ran 3.7sec behind Askew. However, immediately he had to switch from attack to defense because Sowery wasn’t giving up.

Over the next five laps, these two passed and re-passed each other countless times, sometimes under hard braking at the end of the three straights, sometimes by better placement through the technical section in the second half of the Circuit of The Americas. It was hard and fair – although Race Control did give Sowery a warning for blocking – but it created two issues. Leader Askew was out of sight, 15sec to the good, and it was allowing fourth-placed VeeKay back into play, and he had way more push-to-pass boosts remaining.

Finally on Lap 13 Megennis started edging away from Sowery who now had VeeKay all over his rear wing. At Turn 1 on Lap 14, VeeKay made his first attempt to dive up the inside of the BN/Pelfrey car but pushed wide and Sowery got him back. Two laps later VeeKay made the same move stick … until turn 11, when Sowery, smoking his front tires for the umpteenth time under braking, slid into third… and ran wide. He attempted the same at Turn 12 but again to no avail.

Once Sowery fell back with square front tires, VeeKay homed in on Megennis using his push-to-pass, but every time he nosed ahead, Megennis got him back. Finally VeeKay got it right, Megennis twitched slightly out of shape one too many times in pursuit over the final two laps, and second place was VeeKay’s at the flag by a quarter second.

Also on the final lap, Sowery in hard defense of his fourth place suffered a spin at Turn 12, allowing both Falchero and Norman through.

Up front, despite lapping 1.5sec off his fastest lap, Askew won by over 24sec.

De Ferran: Pato O’Ward “drove his heart out” to another podium