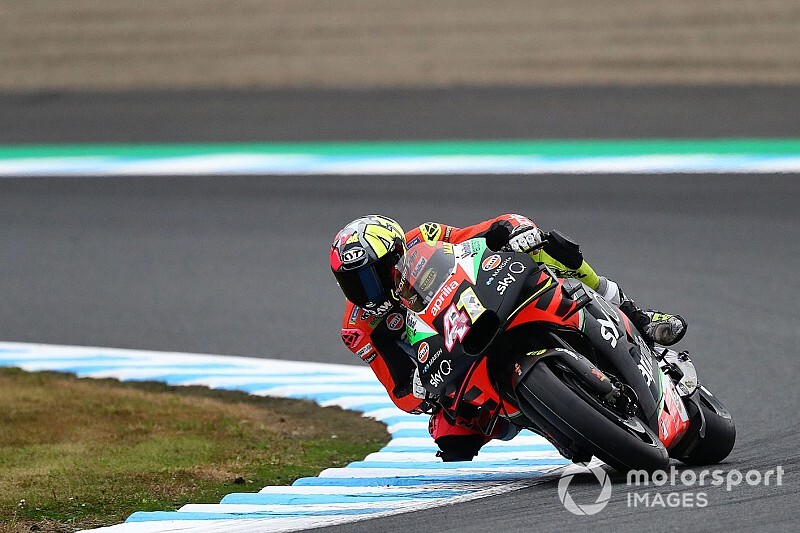 The outfit revealed riders Aleix Espargaro and Andrea Iannone both encountered issues with their engines in the Motegi race, despite running new units.

Espargaro, who had qualified ninth, began to tumble down the order almost immediately in the race and toiled to an eventual 15th place, whereas Iannone crashed at the sharp Turn 11 right-hander - with the team indicating his accident was caused by an engine-related problem.

The two problems add to the RS-GP's dubious reliability record, coming just two weeks after Espargaro retired from the Thailand race due to an electrical issue.

Rivola, who joined Aprilia in the off-season after a long stint with Ferrari, elected to address the media after the Motegi race in place of his two riders.

"The start was good, but we immediately realised that there was a problem because Aleix did not have the pace of this morning [warm-up]," Rivola explained.

"They were two new units and we really need to understand what happened: we will completely disassemble them to find out what the nature of the problem was and if the engines will still be usable in the next races.

"It's true that we are at the end of the current engine's lifespan, but we must try to finish the season in the best possible way. Aleix's performances have been very good in this period, and we can reap encouraging results.

"We always see him in Q2, and not finishing the races gives me much anger because we cannot express our true potential."

Rivola said he was in the process of figuring out a way to "improve quality and processes, and have a more reliable and competitive product".

Asked whether the MotoGP team is in need of an increased budget, Rivola said: "Of course Aprilia is part of a very strong group [Piaggio Group], which can do that - but I believe that we must earn the trust of the Piaggio Group and these things don't help us.

"Having problems when you could've performed well means we can't go home and sleep well because we've made mistakes and it's up to us to solve them."

Quartararo was given rookie season target of '50 to 90 points'