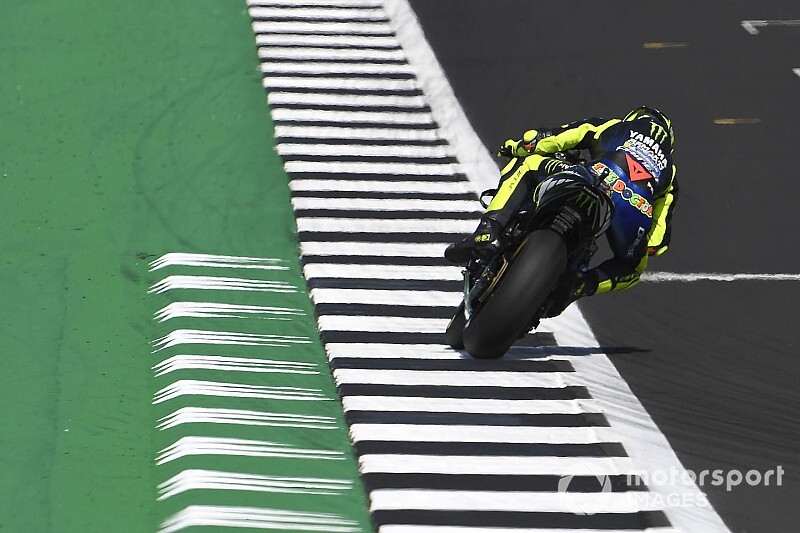 MotoGP has altered the track limit boundary at the exit of Silverstone's Chapel Curve in the wake of several riders having laptimes deleted in Friday's second practice session.

It was agreed to make the changes in Friday evening's Safety Commission meeting, after Fabio Quartararo, Valentino Rossi and Takaaki Nakagami all had their best laptimes deleted in FP2.

Stewards reviewed video evidence after the session and concluded that Quartararo's record lap of 1m59.225s should in fact be allowed to stand, while Rossi and Nakagami were reinstated in fourth and 11th places respectively.

To avoid further controversy, it was decided that a small area of green tarmac just beyond the end of the kerb leading onto the Hangar Straight - normally considered beyond the boundary of the track - should be turned white, making it legal for riders to use it exiting Chapel.

After his best lap in FP2 was reinstated, Yamaha rider Rossi commented: "I was quite surprised, because on the bike it didn't feel like I was on the green [section]. Usually you realise, like what happened to me in FP3 at Assen.

"Then [team director Massimo] Meregalli went to ask for clarification, because they were checking, and after quarter of an hour, they gave us the time [back].

"At this point the white area after the kerb ends abruptly, so we will talk about in the Safety Commission. If we can increase the white part, maybe it's better for the stewards, who do not have to check at every turn if we run on the green or not."

He added: "It's a question of safety. In theory there should be grass there, but the tarmac was added because you come out of that corner very fast and you pass very close to the grass - if you got it wrong by a few centimetres it would be dangerous.

"By putting the tarmac you make it safer, but the problem is then you start using all the tarmac. It's a bit like hawk-eye in tennis: if you touch the white line it's in, if you don't it's out. Anyway, I think it's good to have this as a rule."