The bump at Silverstone's Brooklands corner that Daniel Ricciardo identified as something that could give MotoGP riders a headache is set to be fixed ahead of the championship's visit in August.

Silverstone underwent a complete resurfacing last month after the previous asphalt laid in 2018 deteriorated and a lack of drainage during a day of persistent rain led to the cancellation of MotoGP's British Grand Prix.

The new work was carried out by Solihull-based company Tarmac and was overseen by Italian track design firm Studio Dromo, which has previously been responsible for surface upgrades at numerous MotoGP venues as well as the redesign of the Termas de Rio Hondo track in Argentina.

Although the new surface was met with praise by F1 drivers last weekend, they noted some bumps remained - including a particularly problematic one into the Turn 6 left-hander of Brooklands.

Dromo owner Jarno Zaffelli told Motorsport.com this was known about immediately after works had been completed, and that work to correct the bump before the F1 weekend was considered.

But with only 10 days having elapsed since the completion of the resurfacing work and the risk posed to the smooth running of F1's British GP, the idea was scrapped.

Zaffelli confirmed to Motorsport.com that the FIM's inspection of the new surface took place on Monday morning and that remediation work at Brooklands was already planned.

The work has now been allocated a day between now and the MotoGP event on August 23-25 - though this is still subject to the feasibility of Tarmac's proposal and weather conditions.

Contractor 'can't be blamed' for bump

Zafelli added the bump was a result of Tarmac using the Wellington Straight to get to grips with the new type of temperature-sensitive asphalt never before used on a British circuit.

"We rebuilt up [the surface] in two layers," explained Zaffelli. "The first layer was regulated and was quite easy because it was a softer compound.

"Then, when we did the wearing course, it was very difficult and very sensitive to temperature. As hard as you want the material, you need to have more stringent temperature control, and this is exactly what we had.

"The problem is that on the first day, we decided to start from the Wellington straight. The reason being, the Wellington Straight gave the contractor 500, 600 metres to train with this kind of material that was never used in the UK, apart from the trial test we did before.

"But it is always difficult actually going into [and doing] the works. So Brooklands was the first corner of the first day of this new material."

Zaffelli says he "cannot blame" Tarmac for the bump, due to the circumstances they were working under, and instead praised its commitment towards the project.

The previous asphalt, laid by Aggregate Industries, was also met with praise initially when it was first laid but it had deteriorated by the time F1 visited in July.

Zaffelli noted the new surface showed no signs of degradation during the F1 weekend, despite its freshness, hailing it as an "outstanding result".

"So we know that we are good with drainage, we know that we increased the flatness of [reduced bumps] more than 60 percent in respect of what was there before," said Zaffelli.

"We know that we had Formula 1 doing an amazing race and destroying the [lap] record during Lewis Hamilton's last lap with hard tyres of more than four seconds after only 20 days from laying, and the asphalt is absolutely good.

"[There was] no sign of rubbling [break-up], nothing. So it absolutely was an outstanding result." 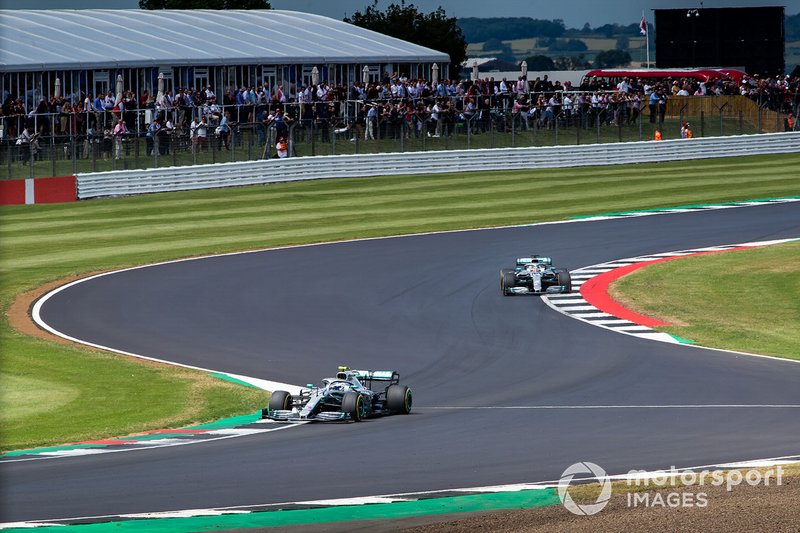