NASCAR and Charlotte Motor Speedway on Wednesday announced the format of this year’s $1 million-to-the-winner all-star race next month.

The race format itself is very similar to 2018, with four stages of 30, 20, 20 and 15 laps each. That’s a five-lap change over last season. Both green flag and yellow flag laps will count in Stages 1-3; with only green flag laps counting in the final stage.

NASCAR Overtime rules will be in effect for Stages 1-3. In the final stage, if the race is restarted with two or less laps remaining, there will be unlimited attempts at a green, white, checkered finish under green flag conditions.

The most significant change will be in the cars themselves.

For the 2019 edition, the cars will feature two keys technical elements that may be incorporated into the Gen-7 car slated to debut in 2021.

Current manufacturers Toyota, Chevrolet and Ford have been in discussions with NASCAR to help inform the direction of the regulations, and the series has consulted OEMs outside of NASCAR in a bid to attract more car-makers. Road-relevance and controlled costs are two of the targets for the next generation car.

The first technical change is single-piece carbon fiber splitter/pan that should offer dramatic improvements in ride height sensitivity for the drivers. This technical component will provide a more stable aero platform and create more consistent performance in traffic.

The second component consists of the car being configured with a radiator duct which exits through the hood as opposed to the current design which exits into the engine compartment. This feature should improve aerodynamic parity and, at the same time, reduce engine temperatures.

“Throughout its history, the Monster Energy NASCAR All-Star Race has provided a platform to try new and innovative ideas, some of which we have incorporated on a full-time basis,” said Steve O’Donnell, NASCAR executive vice president and chief racing development officer.

“Last year’s all-star rules package resulted in one of the most exciting all-star races in history. With a similar package, and added elements that we could see in the next generation race car, we expect another must-watch event.” 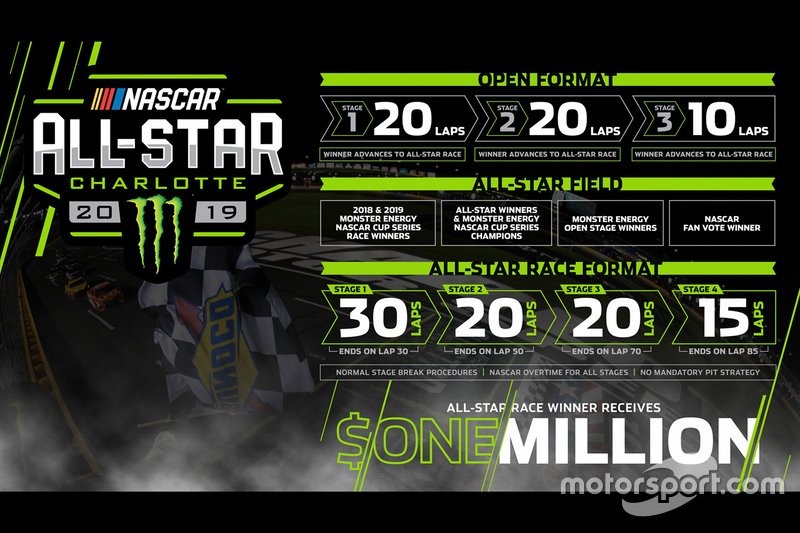