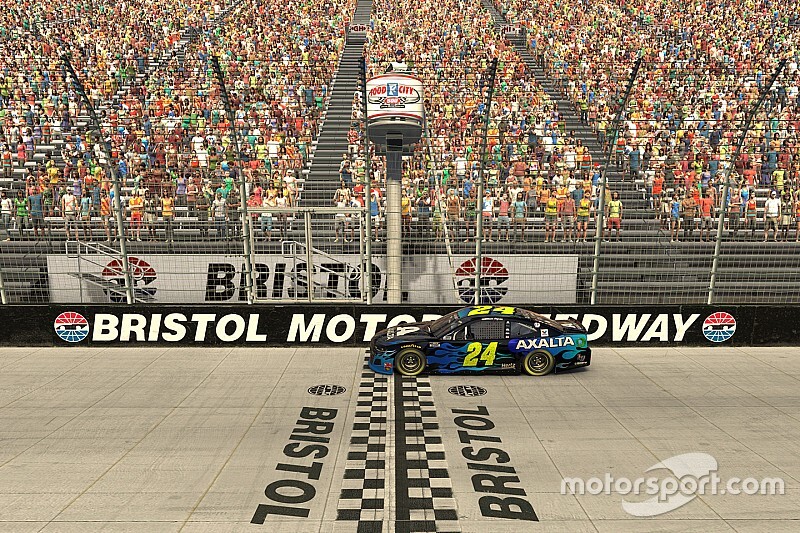 William Byron escaped the carnage and took the victory in third round of the Pro Invitational Series at virtual Bristol Motor Speedway.

There were twin 50-lap heat races to set the field before the main event.

William Byron, who was fastest in qualifying, cruised to the Heat 1 win ahead of Christopher Bell and Dale Earnhardt Jr. In the second heat, John Hunter Nemechek narrowly beat Ryan Preece in a photo finish for the win and the honor of starting on the outside of the front row.

The race itself was 150 laps with a 32-car field and it didn't take long for the wrecking to begin at the high-banked half-mile. Several cars came together on the opening lap after Ryan Preece spun off the nose of Kyle Busch.

This was the beginning of a rash of yellows that plagued the first 50 laps of the race. Bubba Wallace abruptly left the session after contact with Clint Bowyer, with both drivers pointing fingers at the other.

There were five cautions in the first 50 lap before the first real green-flag run, which lasted only 20 laps before the next yellow. Byron remained in control of the race.

Tempers flared between Kyle Larson and Daniel Suarez, which continued under caution as they took shots at each other. Both drivers were parked and removed from the race.

Byron and other frontrunners took the opportunity to pit while Landon Cassill and Chris Buescher led a contingent of drivers who stayed out.

Cassill would ultimately be the next yellow after getting turned. Several cars were damaged in the crash including Texas winner Timmy Hill.

Buescher now led Matt DiBenedetto, but Byron was coming. The No. 24 machine rolled the bottom well and moved all the way back up to second before the next caution period.

Byron was able to take over the top spot from Buscher with 42 laps remaining.

Another contender, Parker Kligerman, was forced to pit for a quick repair after contact with Garrett Smithley with less than 40 laps to go.

Kyle Busch went around and impacted the inside wall with ten laps to go, setting up the final restart of the race.

Byron got away and was able to cruise to the race win while the rest of the frontrunners were left to contend for second. Nemechek prevailed in a photo finish for the runner-up position over Hill in third and Homestead winner Denny Hamlin in fourth.

DiBenedetto rounded out the top-five, followed by Preece, Kligerman, Reddick, Smithley, and McDowell in the top-ten.

"It was a lot of fun," said Byron. "We had to work through some track position and really tried to keep ourselves up toward the top-five and luckily we were able to do that," Byron said. "I made the pass on Chris Buescher there (for the lead) and then just had to manage the restarts. Thankful for Axalta for allowing us to run this cool black and blue paint scheme.

"Some things are different (in iRacing) but a lot are similar. This is one of the race tracks I've always enjoyed coming to in the Cup car and all the cars I've ran there. Working on this track in the offseason was helpful. It's just fun to have a little bit of pressure in iRacing because I normally just do it to try to learn and get better, but to be able run with a a good group of guys is really cool."