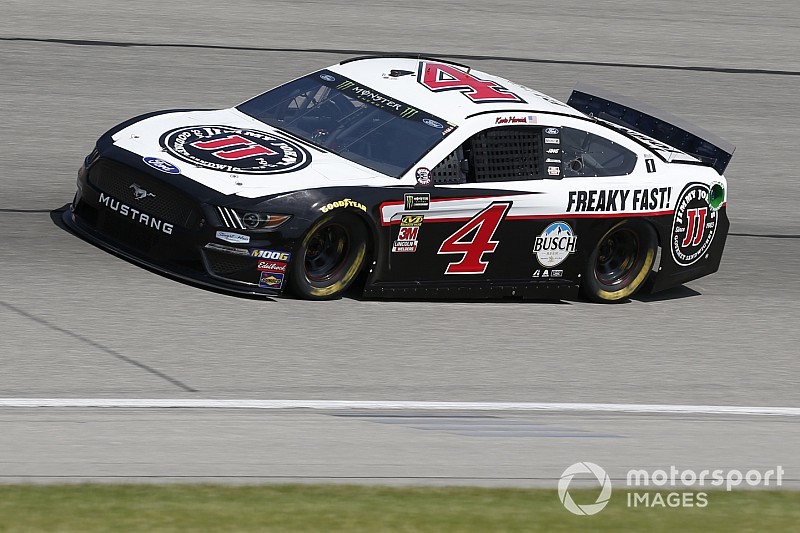 Kevin Harvick withstood a tough challenge from Hendrick Motorsports teammates and a possible tire issue to take the Stage 2 win at Chicagoland Speedway.

With 28 of 80 laps remaining in the second stage, Harvick thought he had another tire going down but was able to ride it out and held off Chase Elliott for the stage win.

After the break between Stages 1 and 2, several teams who pit late in Stage 1 stayed out and Harvick took over the lead when the race returned to green on Lap 86. He was followed by Larson, Ricky Stenhouse Jr., Denny Hamlin and Daniel Suarez.

On Lap 87, Johnson worked his way back to second behind Harvick while Hamlin ran in third.

With 65 laps remaining in the second stage, Byron had moved into the second position behind Harvick while Clint Bowyer was forced to pit road for another tire issue.

William Byron went inside of Harvick on Lap 99 and came away with the lead for the time in the race as Harvick dropped to second. Johnson remained in third.

Caution was displayed on Lap 104 for fluid on the track, presumably from the No. 77 of Quin Houff. Kyle Busch received the free pass under the caution and returned to the lead lap.

All of the lead-lap cars elected to pit with Byron the first off pit road. He led the way when the race restarted on Lap 109, followed by Harvick, Johnson, Larson and Elliott. Hamlin was penalized for an uncontrolled tire and had to restart the race from the rear of the field.

Harvick charged back to the lead as Byron had trouble on the restart and dropped back to 11th.

With 45 laps to go in the second stage, Harvick maintained a small lead over Johnson with Elliott running in third. Larson was fourth and Kurt Busch was fifth.

After 125 laps, Harvick was still out front and all four Hendrick Motorsports drivers were running in the top-10, with Johnson leading the way in second.

With 28 laps remaining in the second stage, Harvick reported he may have another tire issue developing.

On Lap 137. Suarez slowed with smoke after contact from Hamlin off Turn 4. Suarez headed to pit road for service as the race remained green.

With 15 laps remaining in the second stage, Harvick remained in the lead with a small advantage over Johnson with Elliott running in third.

After 150 laps, Kyle Busch had made his way back into the top-10 after a rough start to the race as Harvick stayed in the lead.

With five laps remaining, Elliott made his way around Johnson after a spirited battle to reclaim the second position.