One of NASCAR’s most experienced veterans helped celebrate the sport’s return to live racing Sunday at Darlington (S.C.) Raceway.

Kevin Harvick, who was the Cup Series points leader but without a win when NASCAR suspended its season, corrected that problem with a dominating performance with his victory in the Real Heroes 400.

Harvick led 159 of the 293 laps and his pit crew got him off pit road first in all but one stop.

Harvick held off Alex Bowman by 2.154 seconds and remains the only driver to finish in the top-10 in every race this season. The win was the 50th of his career, tying him with Ned Jarrett and Junior Johnson for 12th-place all-time.

"I just want to thank everybody from NASCAR and all the teams for letting us do what we do. I didn't think it would be that much different if we won the race, but it's dead silent here," Harvick said after exiting his car at the start/finish line. "We miss the fans.

"It's a pretty big honor to win 50 races in this deal. I just have to thank all my teams guys and everybody for what they're doing. I have to say hi to DeLana (his wife) and my kids at home - I guess we'll bring home the trophy." 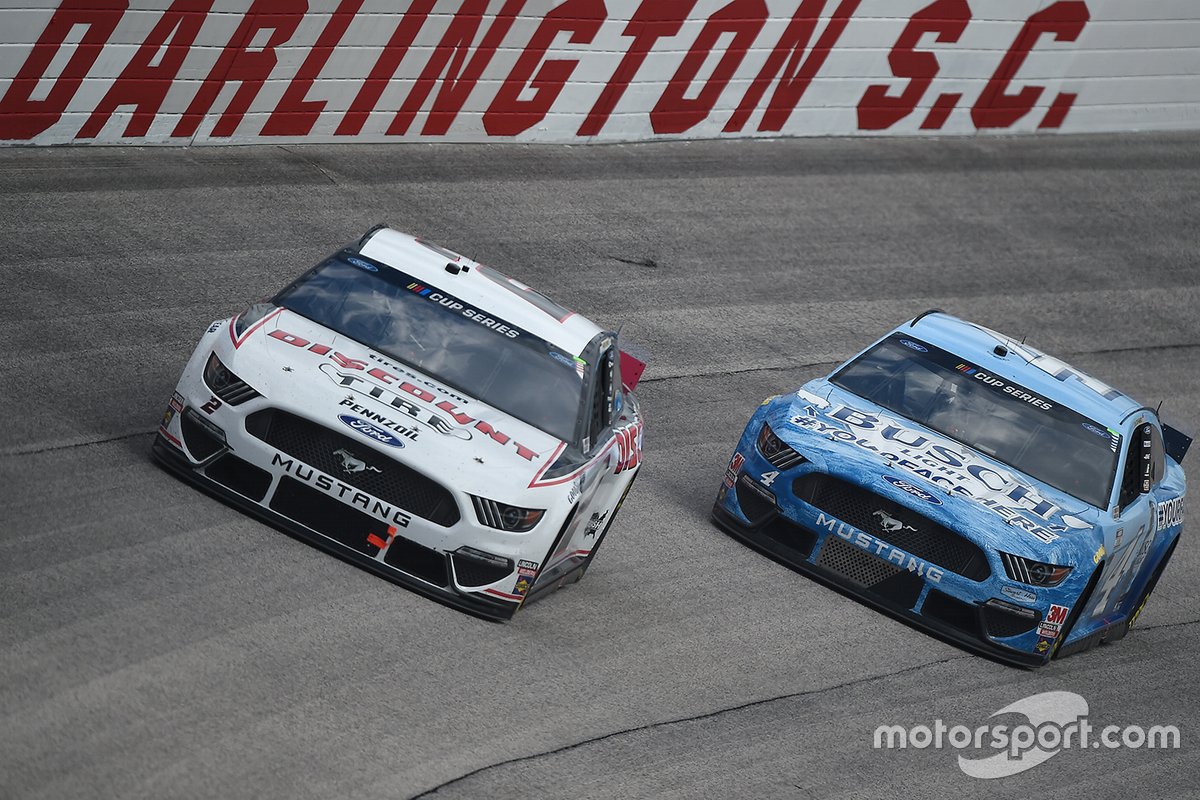 "I think as you look at Darlington and you look at the things that happened this week, I really thought it could play into our hands just because our guys are just so good at hitting the car (set-up right) off the truck for the most part," he said. "We spent a lot of time, a lot of effort, a lot of studying, a lot of meetings. Man, I'm excited. It is weird just because there's nobody up there (in the stands)."

Sunday’s race was the first live NASCAR event since March 8 at Phoenix Raceway. The following week, all professional sports were shut down as the COVID-19 pandemic gripped the United States.

In recent weeks, the state governments in North and South Carolina have loosed their stay-at-home orders which allowed NASCAR to schedule several race events at Darlington and Charlotte Motor Speedway over the next two weeks but without fans in attendance.

The Xfinity Series will compete at Darlington on Tuesday night while a second Cup race will take place Wednesday before NASCAR moves to Charlotte beginning on May 24.

Following the break between Stages 2 and 3, Bowman was first off pit road and led the way when the race returned to green on Lap 193.

Keselowski powered by Bowman off Turn 2 to reclaim the lead after the restart.

With 85 laps remaining, Brad Keselowski maintained a small lead over Bowman. Truex as third, Harvick fourth and Hamlin rounded out the top-five.

On Lap 213, Chris Buescher went around on the frontstretch to being out a caution. At the same time, there appeared to be a grass fire behind the wall in Turns 1 and 2 and a line of smoke poured into the sky.

All of the lead-lap cars pit with Harvick the first off pit road and he reclaimed the lead on the restart on Lap 218. The smoke from the fire soon dissipated. 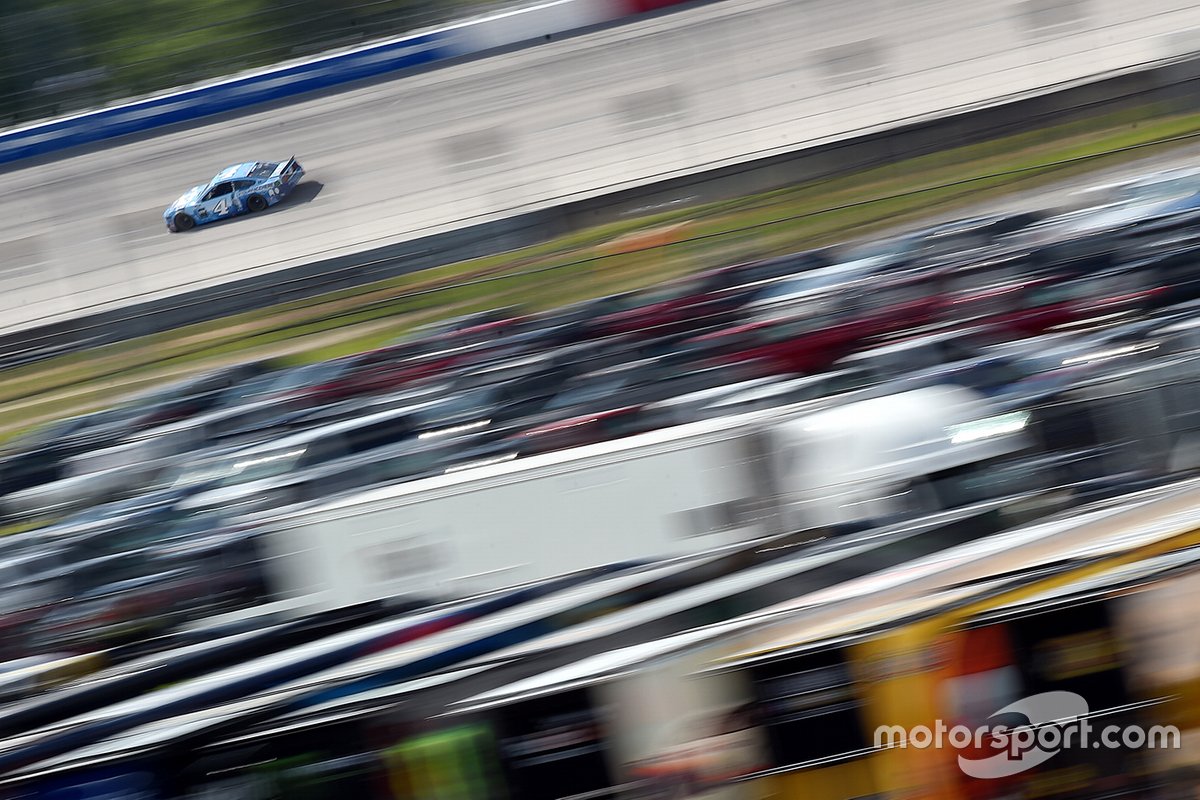 With 50 laps remaining, Harvick had moved out to a more than 2-second lead over Bowman. Elliott had moved up to third, 5.1 seconds behind the leader.

Ryan Newman spun in Turn 1 to bring out a caution with 41 laps remaining. All of the lead-lap cars pit and Harvick once again exited first to retain the race lead.

On the restart on Lap 260, Harvick was followed by Bowman and Elliott. Kurt Busch was fourth and Kyle Busch rounded out the top-five.

While running fifth, Kyle Busch was forced to make an unscheduled pit stop on Lap 267 with what appeared to be a loose wheel. When he returned to the track he was running 28th and one lap down.

Keselowski grabbed the lead off pit road following a late caution and held off Bowman to pick up the Stage 2 win.

Truex rebounded from struggles early in the race to finish third, Harvick was fourth and Clint Bowyer completed the top-five.

Following the break between Stages 1 and 2, all of the lead-lap cars pit with Harvick the first off pit road. On the restart on Lap 98, Harvick was followed by Bowman and Hamlin.

Both Elliott and Newman were penalized for being too fast on pit road and had to restart from the rear of the field.

On Lap 110, William Byron got loose and tagged the wall and spun off Turn 2 to bring out a caution. “I knew I should’ve pitted when I had a vibration,” Byron said over his radio.

All the lead-lap cars pit with Harvick the first off pit road. On the restart on Lap 116, Harvick led the way followed by Bowman and Keselowski.

After 120 laps, Harvick had built nearly a 1-second lead over Kurt Busch as Bowman continued to run third.

On Lap 124, Daniel Suarez spun off Turn 4 as he appeared to be trying to reach pit road with a flat tire.

Once again the lead-lap cars elected to pit and Harvick, who has the first pit stall, was first off pit road. On the restart on Lap 130, Harvick led the way followed by Bowman and Kurt Busch.

Debris from a sponsor banner got loose and drifted onto a couple cars before NASCAR threw a caution on Lap 155 to clean up the problem.

All the lead-lap cars pit and Harvick’s crew once again got him off pit road first. On the restart on Lap 161, Harvick was followed by Keselowski and Kurt Busch.

Both Tyler Reddick and Aric Almirola were penalized for having uncontrolled tires during their respective stops and had to restart from the rear of the field. 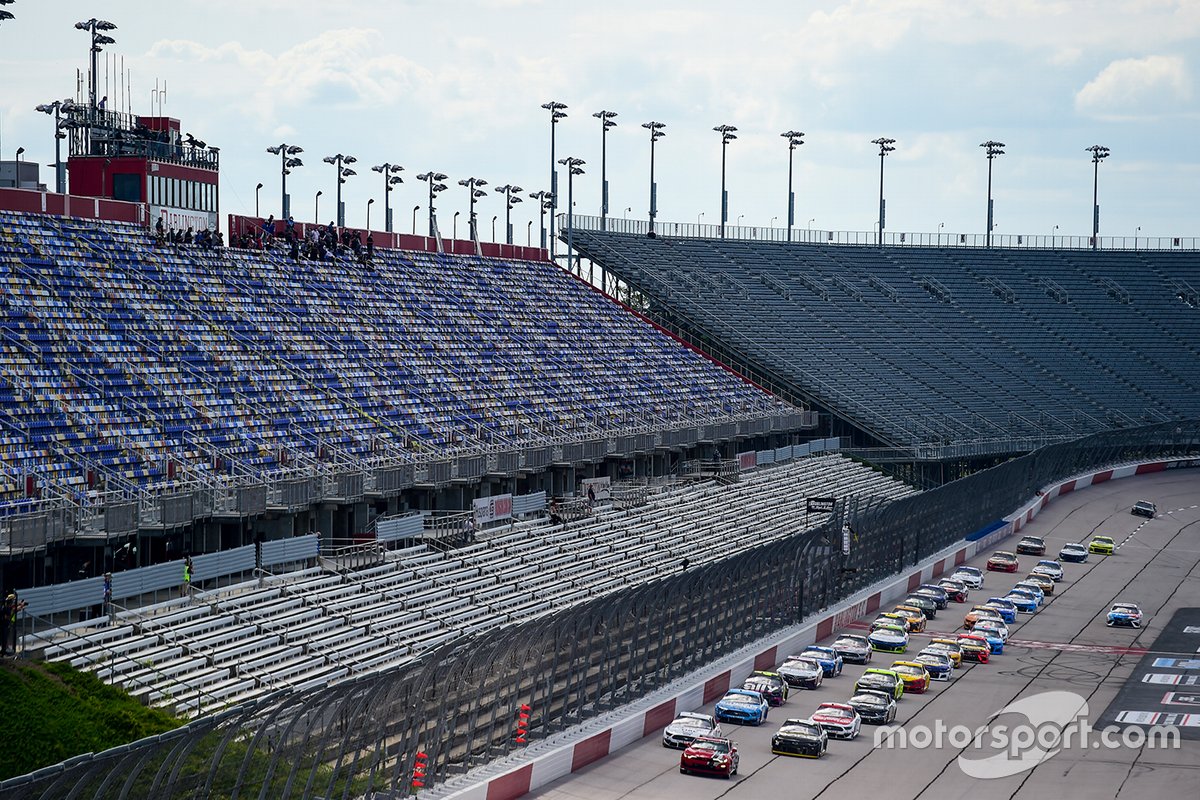 With 20 laps remaining in the second stage, Harvick maintained a small but steady lead over Keselowski as Truex – who struggled early in the race – moved into third.

Christopher Bell spun off Turn 4 on Lap 173 to bring out another caution. The lead-lap cars all pit again for fresh tires with Keselowski the first off pit road as Harvick had an uncharacteristically slow stop.

The race returned to green on Lap 178 with Keselowski followed by Truex and Joey Logano.

Byron picked up the Stage 1 win when leader Jimmie Johnson ran into the back of Chris Buescher on the final lap.

Buescher was fighting to stay on the lead lap but Johnson got into the back of him and his No. 48 Chevrolet spun into the backstretch wall, allowing Byron to slip by and win the stage.

Keselowski started on the pole, thanks to a random draw procedure NASCAR conducted on Thursday.

Just as the field exited Turn 2 after taking the green, Ricky Stenhouse Jr. got turned and slammed nose-first into the backstretch wall, bringing a quick end to his day.

The race returned to green on Lap 7 with Keselowski out front.

After 20 laps, Keselowski maintained a small but steady lead over Harvick with Hamlin running in third.

NASCAR threw a modified competition caution on Lap 30, in which teams were allowed pit for adjustments without losing positions.

Once the stops were completed, the race returned to green on Lap 40 with Keselowski still in the lead.

On Lap 45, Bowman ran down Keselowski and grabbed the lead for the first time off Turn 2 as Johnson moved in behind him to second.

With 35 laps remaining in the first stage, Bowman had moved out to almost a 1-second lead over Johnson as Byron moved up to third.

With 25 laps to go, Bowman’s lead over Johnson had ballooned to almost 4 seconds. Byron remained third, Hamlin fourth and Keselowski had fallen to fifth.

Johnson and Byron both cut Bowman’s lead to under a second with 15 laps remaining in the stage.

Johnson finally went to the inside of Bowman off Turn 4 on Lap 81 to grab the lead for the first time in the race.

Kyle Busch failed pre-race inspection twice and was forced to start the race from the rear of the field.

Johnson crashes from lead moments away from Stage 1 win